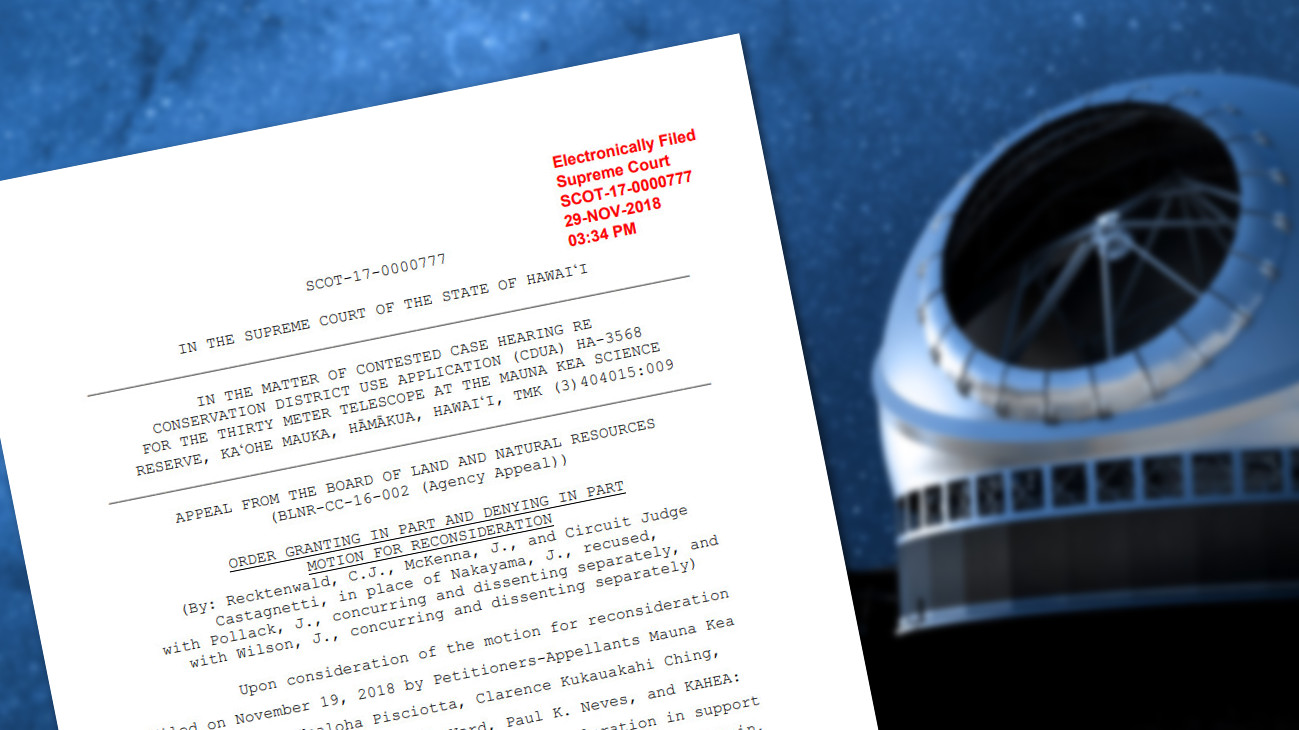 the order from the Hawaiʻi Supreme Court, with TMT rendering courtesy TIO

HONOLULU, Hawaiʻi - On Thursday, the high court denied a Motion for Reconsideration as well as a Motion for Leave to Appear and File a Brief as Amici Curiae.

(BIVN) – With the exception of changes to some footnotes in the original order, the Hawaiʻi Supreme Court on Thursday denied a motion for reconsideration filed by the petitioners in the case of the Thirty Meter Telescope planned for Mauna Kea.

On October 30, the Hawaiʻi Supreme Court ruled in favor of the state and its approval of a Conservation District Use Permit, paving the way for the $1.4 billion TMT observatory to build on the mountain. Associate Justice Michael Wilson dissented from the majority opinion.

A central issue of consequence to the parties has therefore understandably been how to apply conservation laws to a resource that has already been degraded by prior land use. The dissent notes that the Majority Opinion does not address the Board of Land and Natural Resource’s (BLNR’s) application of the new principle that prior degradation of cultural resources amounting to a substantial adverse impact means the TMT project cannot have a substantial adverse impact on cultural resources. The Majority now declines reconsideration based in part on a change to footnote 17 affirming that the BLNR’s consideration of “the effect of the project upon cultural practices” included the entire “summit region.” The change constitutes affirmation that the degradation principle applied by the BLNR will affect the cultural resources of the entire “summit region” of Mauna Kea. Thus, all future land uses proposed for the summit of Mauna Kea will be subject to the BLNR’s finding that the summit has already been substantially adversely impacted—specifically that “without the TMT Project, the cumulative effect of astronomical development and other uses in the summit area of Mauna Kea have previously resulted in impacts that are substantial, significant and adverse” and, therefore, “[t]he level of impacts on natural resources within the Astronomy Precinct of the [Mauna Kea Science Reserve] would be substantially the same even in the absence of the TMT Project[.]”