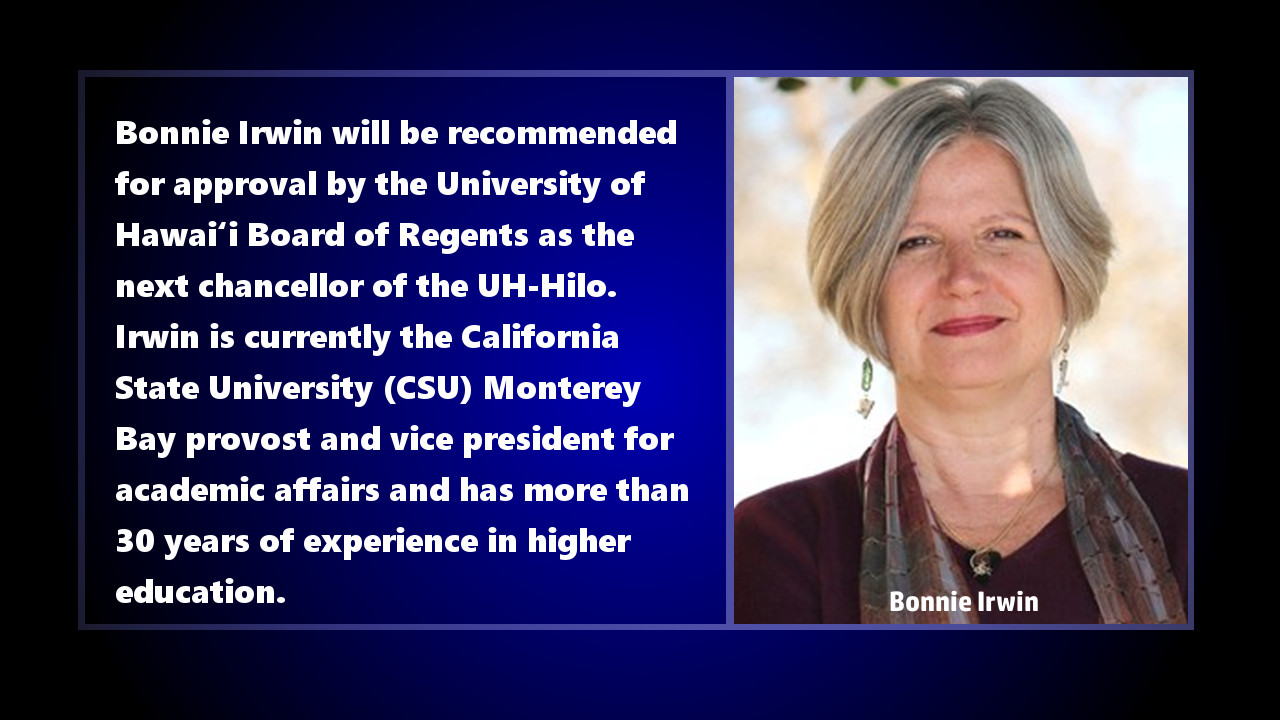 HILO, Hawaiʻi - Bonnie Irwin will take over as UH-Hilo chancellor on July 1, 2019, if the UH Board of Regents approves the recommendation at its January 31 meeting.

(BIVN) – The University of Hawaiʻi – Hilo has an official recommendation for its next chancellor.

Bonnie Irwin, who is currently a senior executive at California State University Monterey Bay, will take over as UH-Hilo chancellor on July 1, 2019, if the UH Board of Regents at approves the recommendation at its January 31 meeting.

Irwin will replace Marcia Sakai, who has served as interim chancellor since 2017, after former chancellor Don Straney left the position to become the UH vice president for academic planning and policy.

Irwin has more than 30 years of experience in higher education, the University System says. UH issued a media release on Monday, saying:

Irwin began her career in higher education in 1984 as a graduate student instructor at her alma mater, University of California at Berkeley. She also served as dean of the College of Arts and Humanities and dean of the Honors College at Eastern Illinois University prior to moving to CSU Monterey Bay in 2014.

Irwin’s responsibilities as chief academic officer at CSU Monterery Bay included leading six academic colleges, a college of extended education and international programs. Under her leadership the campus expanded strategic academic offerings to serve the community while increasing student retention and improving graduation rates. As a senior executive, she collaborated with the school’s leadership team to improve university-wide effectiveness and accountability while advancing student and faculty success. She also worked on and led initiatives for the CSU system, the largest in the nation, to advance public higher education across California.

After starting her teaching career at UC Berkeley, Irwin worked as an adjunct at Iowa State University before accepting a tenure-track faculty position at Eastern Illinois University. She served there as a professor of English specializing in world literature and folklore before moving into administration, where she facilitated initiatives in integrative learning, undergraduate research, guided pathways, interdisciplinary studies and inclusive excellence. She also has created faculty and administrative mentoring programs.

“Bonnie brings a wealth of experience and a heart that will serve our Hilo campus and community well,” said UH President David Lassner in the media release. “She has a deep understanding and appreciation of the critical role small comprehensive regional universities can serve in their communities, and the proven track record to deliver on that promise in the changing environment for higher education in Hawaiʻi and across the nation.”

“I am beyond excited to join the UH Hilo ʻohana and am humbled by this opportunity,” said Irwin. “I know how important UH Hilo is to Hawaiʻi Island and I look forward to working with students, faculty, staff, alumni, island leaders and community members to build on decades of great work as we move the university and community forward. My husband and I are also excited to start immersing ourselves in the unique and rich culture of Hilo and Hawaiʻi Island.”

This story will be updated with video.