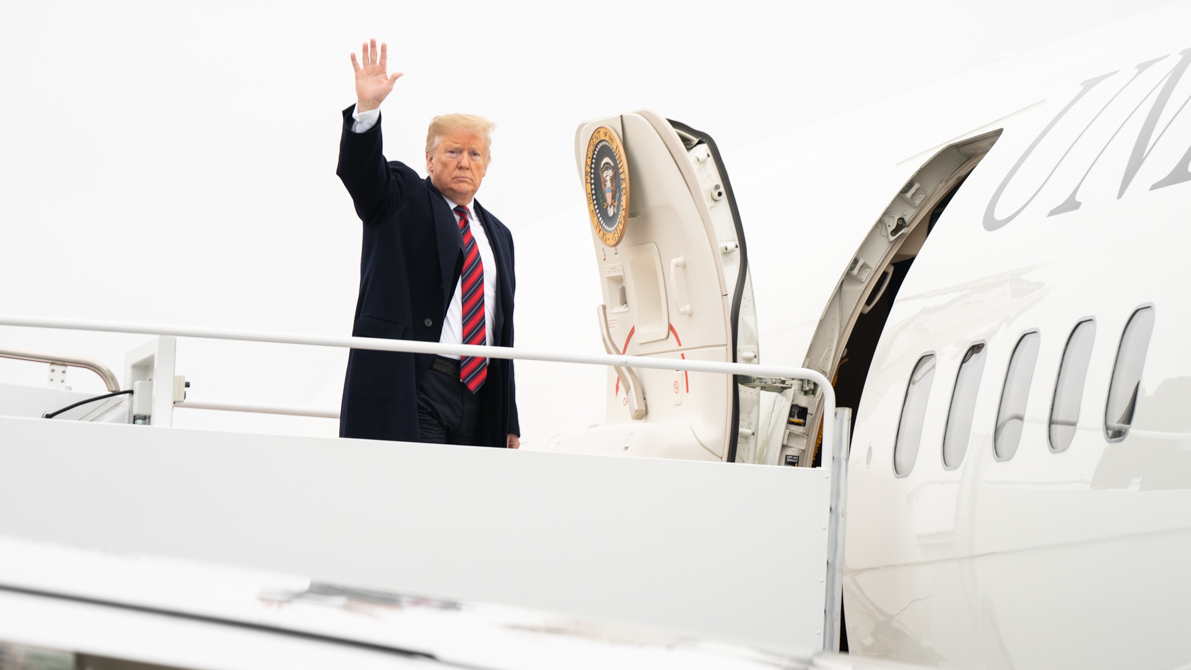 President Donald J. Trump waves as he boards Air Force One at Joint Base Andrews Saturday morning, January 19, 2019, for his flight to Dover Air Force Base in Dover, Delaware, to attend the dignified transfer of remains of four Americans killed Wednesday in Syria. (Official White House Photo by Shealah Craighead)

WASHINGTON D.C. - President Trump presented his latest plan for "bipartisan and common sense legislation" to "reopen our government and secure the border" on Saturday.

(BIVN) – Donald Trump took his message to the people on Saturday, detailing his latest proposal to end the record-long, partial government shutdown while funding his request to build a border wall between the United States and Mexico. However, Democrats – including the two senators from Hawaiʻi – are not in support.

“To every member of Congress: Pass a bill that ends this crisis,” a White House quote from President Trump reads. “To every citizen: Call Congress and tell them to finally, after all of these decades, secure our border. This is a choice between right and wrong, justice and injustice. This is about whether we fulfill our sacred duty to the American citizens we serve.”

According to the White House, Trump’s latest proposal would call for $5.7 billion to “fund a steel barrier system, including embedded investments in technology and roads, on our southern border in the priority areas cited by Border Patrol.” Another $805 million would be used for “technology, canines, and personnel to help stop the flow of illegal drugs, weapons and other contraband,” Trump says, while another $782 million would hire an additional 2,750 border agents, law enforcement officers, and staff.

As part of a bipartisan compromise, Trump says he is proposing to grant provisional status to current DACA and Temporary Protected Status (TPS) recipients.

The White House says “provisional status will be granted for three years for current DACA recipients, covering 700,000 illegal immigrants brought here by their parents at a young age,” which will “give them access to work permits, social security numbers, and protection from deportation.”

“This is yet another bogus offer from a president who changes his mind on a whim and can’t be trusted,” Senator Mazie Hirono said. “Instead of succumbing to the president’s strategy of negotiating through hostage taking, Mitch McConnell should bring the House passed bills to the floor of the Senate for a vote and end this shutdown.”

“We need to open the government first,” said Senator Brian Schatz. “We can negotiate a proposal on border security and immigration later, but risking the health and safety of Americans, hurting the economy, and delivering pain to families can never be the start of a fruitful negotiation.”

“With the largest share of federal jobs in the country, Hawai’i is among the top 3 states most impacted by Trump’s shutdown,” Lopez continued. “The Democratic Party of Hawai’i is calling on the President to come forward with a real comprise and serious proposals to re-open government and restore certainty for our workers. He is being irresponsible with the livelihood of thousands of government employees, and the safety of the entire country.”

The ACLU of Hawaii even issued a response, attributed to Executive Director Joshua Wisch:

“Hawai‘i is home to tens of thousands of federal workers. We’re also home to refugees and DACA recipients. In his statement today, the President is using their lives as poker chips in his bid to secure billions for a wall that doesn’t stand the independent scrutiny of Congress or the American people.

The courts have already provided a temporary fix for DACA by preventing President Trump’s bid to start deporting Dreamers. People in Hawai’i and nationwide demand a permanent solution – which today’s proposal utterly fails to provide. Tying the reopening of government to a policy proposal – from either party – is a perversion of our constitutional system and should not be encouraged. The President is holding all of us hostage for a $5.7 billion ransom.

This administration must stop using Dreamers, refugees, and federal workers as game pieces. This longest ever – and increasingly dangerous – government shutdown should end now. There is a crisis at the border, but it’s the one the President created by separating thousands of families, caging children, and lying about the extent of it all. Keeping over 800,000 working Americans from getting paid – including thousands of Hawai’i families – won’t fix that.”