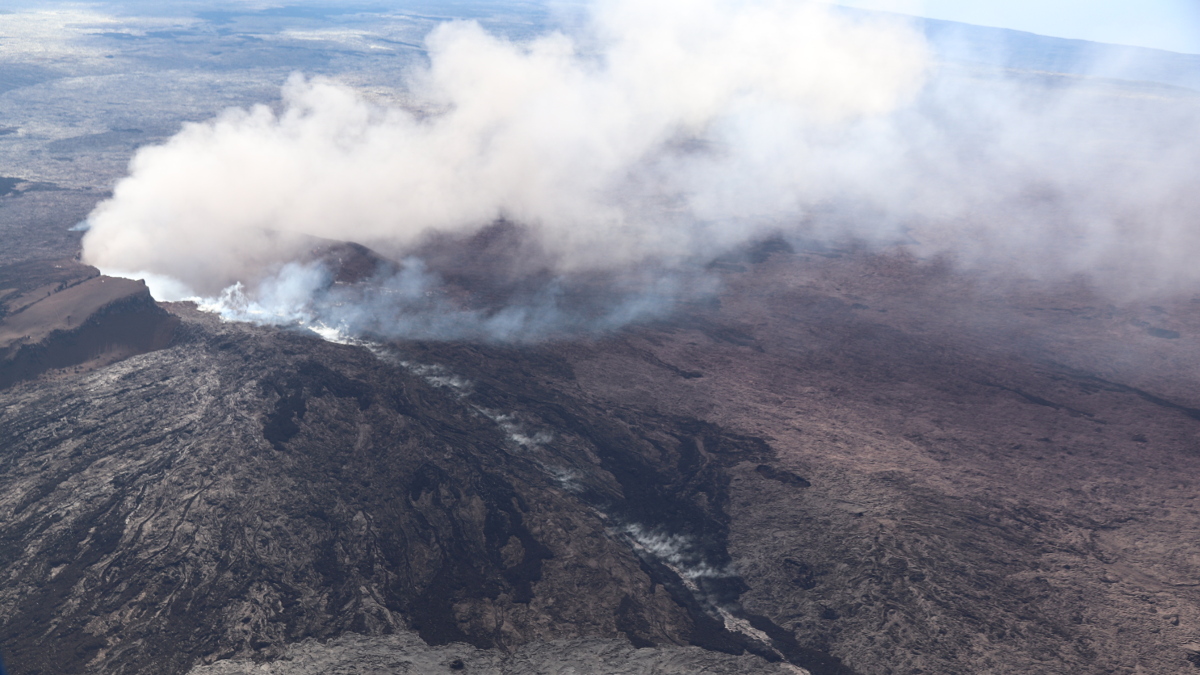 USGS: Puʻu ʻŌʻō on May 3, 2018, as viewed from the helicopter overflight. The crater floor is collapsed, and a thin plume escapes from the gaping crater. The west flank cracked on April 30th around 2:30 pm HST, and minor amounts of lava oozed out of the crack (line of steaming features) just before the plumbing system catastrophically failed.

VOLCANO WATCH: End Of An Era At Pu’u O’o

HAWAIʻI ISLAND - The 36th anniversary of continuous eruption of Puʻu Ōʻō, on January 3, 2019, will not come to pass, scientists say. 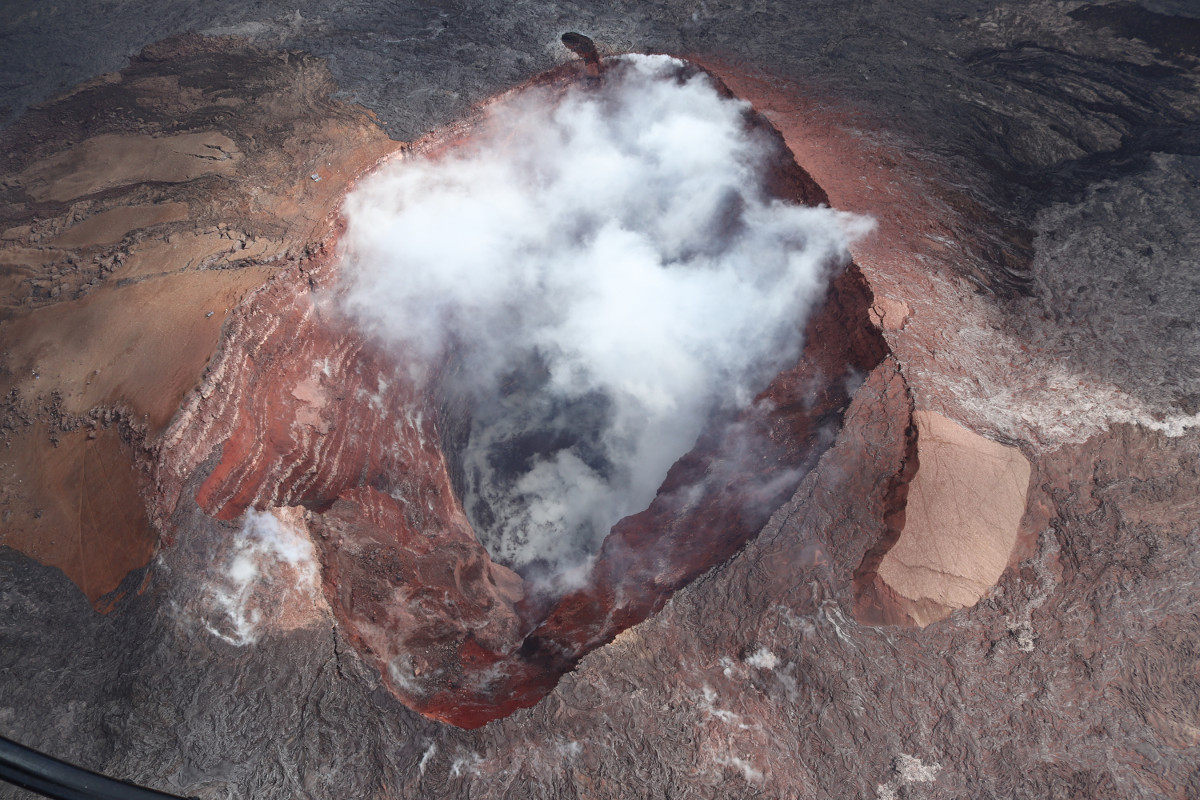 (USGS) Clear conditions provided good views into the deep crater at Pu‘u ‘Ō‘ō. No active lava or signs of increased activity were observed here. The crater walls expose a clear sequence of lava flows and cinder that built the cone in the early 1980s.

(BIVN) – Scientists with the USGS Hawaiian Volcano Observatory return from their hiatus due to the record-long, partial shutdown of the federal government, to pen the first Volcano Watch article of 2019.

The weekly article,  written by U.S. Geological Survey Hawaiian Volcano Observatory scientists and affiliates, delves into what appears to be the end of the 35 year eruption of Kīlauea Volcano, with a focus on Puʻu Ōʻō in the middle east rift zone.

USGS writes, 7 months of no lava at Puʻu ʻŌʻō heralds end of an era:

One of the most frequent questions asked of USGS Hawaiian Volcano Observatory (HVO) scientists the last several months has been, “Is the Lower East Rift eruption over?” But the same question could – and should – be asked of the Puʻu ʻŌʻō eruption.

On January 3rd, 2018, we marked the 35th anniversary of Puʻu ʻŌʻō. For the past three and a half decades, lava has erupted almost continuously from the middle East Rift Zone (ERZ). Minor pauses in surface activity mostly occurred between the fountaining episodes in 1983 – 1986, and subsequently during a few episodes marked by subsidiary fissures, intrusions, or partial crater floor collapses.

Given the longevity of the Puʻu ʻŌʻō eruption, we’d grown accustomed to the luxury of having nearly-uninterrupted access to lava. The lure of reliable lava viewing beckoned to millions of tourists around the globe. But, I say “nearly-uninterrupted” because there have been over one hundred brief pauses in surface activity throughout the 35-year-long event, most lasting hours to a couple days. The six longest pauses during the Puʻu ʻŌʻō activity were each 1 to 2-months-long, and all occurred between fountaining episodes in the first two years.

After the fountaining episodes, there were several Puʻu ʻŌʻō eruption pauses lasting between one week and one month.

The longest eruption hiatus after the fountaining phase lasted 24 days following the episode 54 fissure in Nāpau Crater in February of 1997. In September 1999, there was an 11-day pause during episode 55 after a partial collapse of the Puʻu ʻŌʻō crater floor.

However, on April 30th, 2018 – everything changed. The catastrophic collapse of Puʻu ʻŌʻō has left the iconic eruption site and surrounding lava flow fields devoid of lava through the rest of 2018. December 30th marked the seven month anniversary of no surface activity at Puʻu ʻŌʻō and is effectively a concluding milestone for this long-lived event.

As a refresher from our previous article, the Smithsonian Institution’s Global Volcanism Program (GVP) classifies the end of continuous volcanic activity based on an absence of eruptive activity over a 90 day (three month) period.

Statistically, after a 210 day (7 month) gap in activity, it is extremely unlikely that lava will resume activity within Puʻu ʻŌʻō. Based on historical knowledge of rift zone eruptions, pauses lasting more than 3½ months have ended their respective eruption.

Given the GVP criterion, no signs of imminent unrest, and that December 30th, 2018 marks 7 months of no lava, then the Puʻu ʻŌʻō eruption could be considered over. The 36th anniversary of continuous eruption, on January 3, 2019, will not come to pass.

This does not mean Kīlauea Volcano is dead. New eruptions have previously begun elsewhere on Kīlauea after months to decades of quiet. Magma is being supplied to the volcano, and deformation data shows evidence for movement of molten rock through the magmatic system, refilling the middle ERZ. It’s important to note that Kīlauea is still an active volcano that will erupt in the future, and associated hazards have not changed. When a new eruption does occur, ground cracking, gas emissions, seismicity, and deformation can increase rapidly.