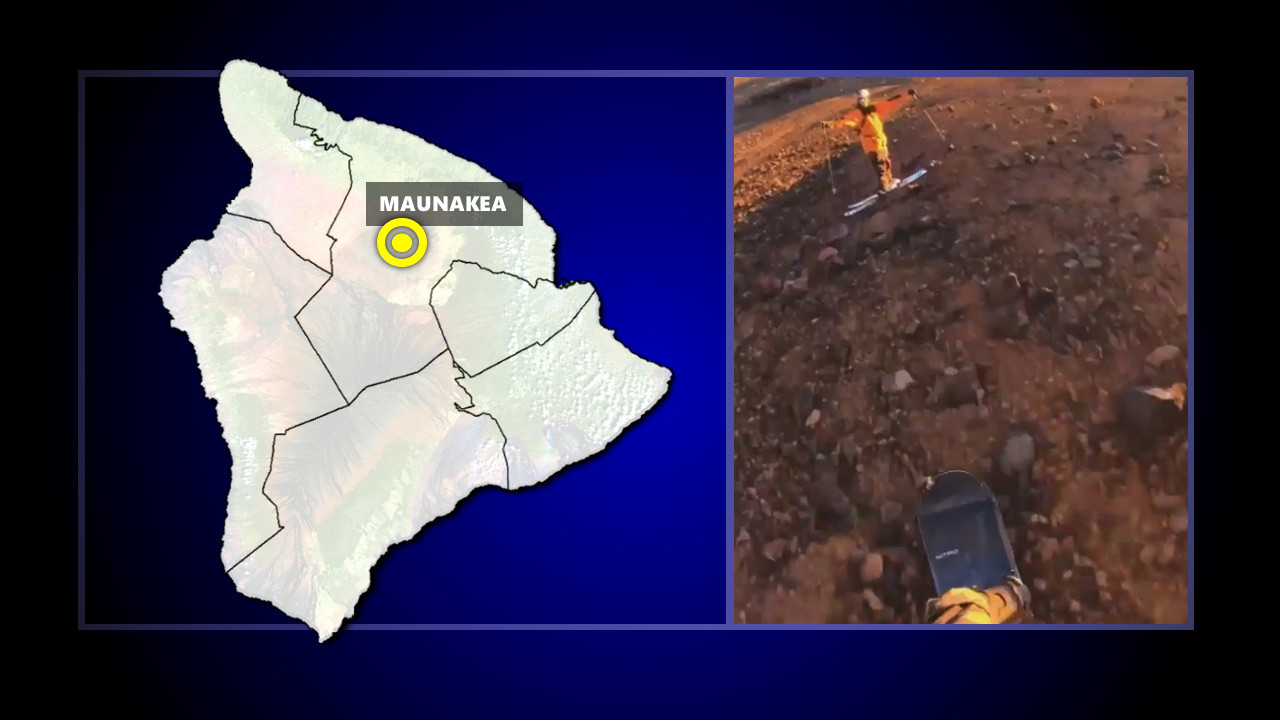 graphic by BIVN, includes frame grab from video recorded of the incident

MAUNAKEA, Hawaiʻi - A viral video showing snowboarding and skiing on Puʻu Poliahu is raising local ire, prompting a statement from the University of Hawaiʻi.

(BIVN) – A recent viral video showing three professional athletes from Europe on snowboards and skis, hitting the snowless slopes of Puʻu Poliahu on Mauna Kea, is getting slammed over social media for its cultural and environmental insensitivity, and has now prompted a response from the University of Hawaiʻi, the institution that manages the summit area of the mountain.

On Wednesday, the University said:

The Office of Maunakea Management (OMKM) is very disturbed by a recent social media video that shows three individuals skiing and snowboarding on Puʻu Poliʻahu on Maunakea on University of Hawaiʻi managed lands. Puʻu Poliʻahu is a volcanic cone that is not only the highest point on the mountain, but is also considered sacred to Native Hawaiians.

“First and foremost, this act was disrespectful to Native Hawaiians and to everyone who considers the mountain sacred,” said Stephanie Nagata, director of UH Hilo’s Office of Maunakea Management. “One of the first acts by Kahu Kū Mauna in 2001 shortly after its creation was to stop vehicular access traffic on the Puʻu because it is a sacred site.”

Kahu Kū Mauna is the volunteer Native Hawaiian advisory board that advises the university on Hawaiian cultural matters on Maunakea.

Nagata says the skiers and snowboarders never applied for a required film permit and that permission would have never been granted for such activities. Beyond the cultural disrespect and because there was no snow on the mountain at the time of the incident, the individuals also defaced and scarred a geological formation and may have damaged Wēkiu bug habitat. Wēkiu bugs, first discovered in 1979, can only be found on the summit.

OMKM urges everyone to treat the mountain with respect. The Maunakea Rangers provide daily oversight of UH managed lands to protect resources and public safety and do not allow visitors to hike off of designated trails. This incident happened on the southside of the Puʻu Poliʻahu, hidden from the view of the rangers on duty. Unfortunately, the university is currently without authority to issue fines or pursue civil remedies, but that is expected to change with the formulation of new administrative rules for public and commercial activities.

The rules would provide the university with authority to directly address this incident. For instance, under the current draft, damaging or disturbing any natural feature, resource, geological, paleontological features and/or historic or prehistoric property or remains would be prohibited. Violators would be subject to immediate expulsion, administrative fines and/or a monetary assessment to recover the cost of restoration. Currently, none of these remedies exist since the state removed these lands from Forest Reserve System in 1968.

UH is currently engaged in informal consultation on the current draft rules. After the second round of public hearings, this draft may be updated again and subject to more hearings, or it may go to the governor for adoption. The public’s constructive engagement in this rulemaking process is welcomed and encouraged.

UPDATE (7 p.m.) – Members of the Office of Hawaiian Affairs Board of Trustees joined the Hawaiian Caucus of the Hawaiʻi State Legislature and members of the Native Hawaiian community today to condemn the actions of extreme athletes on Mauna Kea.

“In 2017, OHA sued the state and UH for their decades-long failure to meet their legal duties to adequately manage Mauna Kea and its natural and cultural resources,” the one-paragraph OHA statement read. “The actions captured in the video are just another example of the state’s inability to prevent disrespectful behavior on the mountain’s sacred cultural landscape.  It is time for the state and UH to be held accountable for their longstanding and well-documented mismanagement of Mauna Kea.”