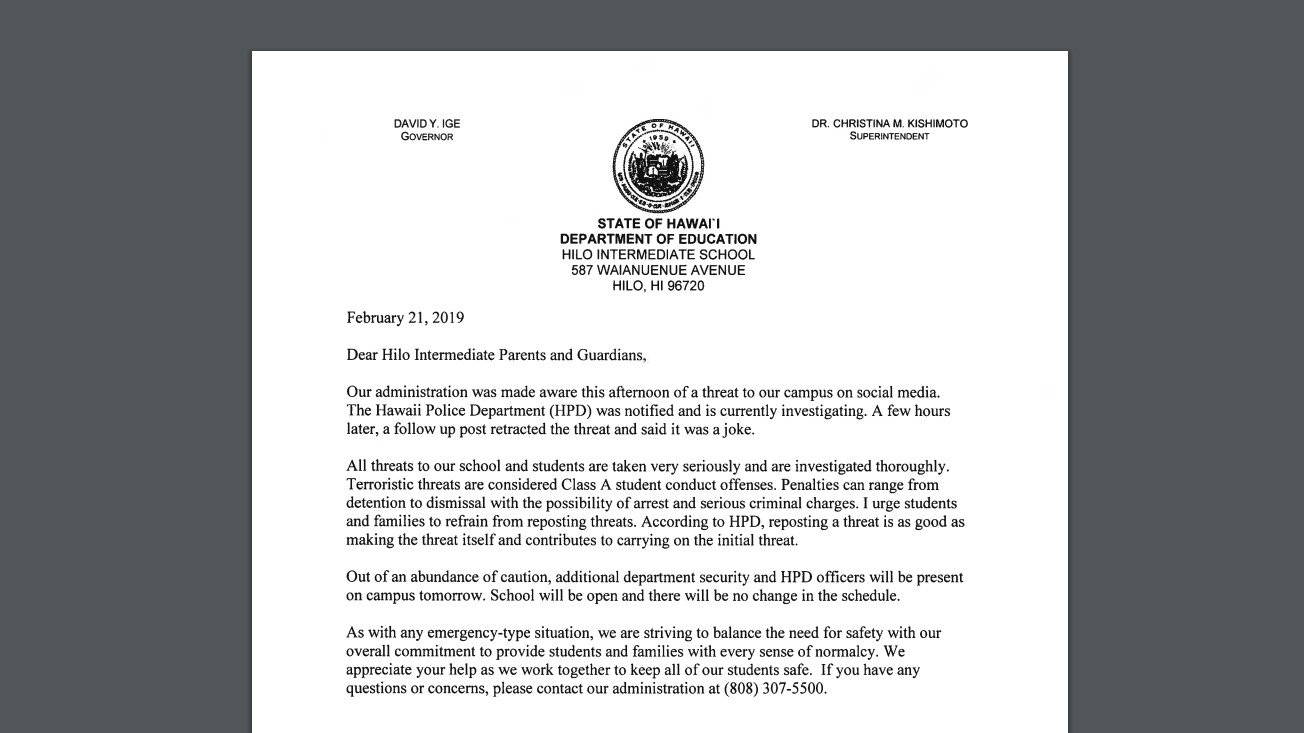 HILO, Hawaiʻi - An alleged threat to the campus of Hilo Intermediate School made over social media is being taken seriously by officials and law enforcement.

(BIVN) – Hilo Intermediate School will be open on Friday, although there will be additional security and police officers present, following an alleged threat made over social media on Thursday.

“This afternoon we were made aware of a threat to our campus made on social media,” said a letter to parents from Principal Heather Dansdill. “A subsequent post a few hours later retracted the threat and said it was a joke. Law enforcement was contacted immediately and is working closely with the Complex to investigate.”

“Out of an abundance of caution, additional department security and HPD officers will be present at Hilo Intermediate tomorrow,” Complex Area Superintendent Chad Farias wrote in a similar letter to parents. “All Hilo Complex schools will be open and there will be no change in schedules.”

The letters from Farias and Dansdill both stated:

All threats to our schools and students are taken very seriously and are investigated thoroughly. Terroristic threats are considered Class A student conduct offenses. Penalties can range from detention to dismissal with the possibility of arrest and serious criminal charges. I urge students and families to refrain from reposting threats. According to law enforcement, reposting a threat is as good as making the threat itself and contributes to carrying on the initial threat.

Hawaiʻi County Police issued a Nixle alert Thursday evening confirming that they “are investigating a threat made on a social media post towards one of the island schools. In addition to the Big Island School threat, other threats were made toward some Oahu Schools. Police investigating the matter do not find any legitimate threat at this time however, the safety of our island students are paramount to the Hawaii Police Department.”

Police also confirmed that “as a precautionary measure police personnel will be deployed at the various schools in an effort to keep our ‘keiki’ safe.”

Police encourage the public to notify them regarding any suspicious activity or threats made toward any school. Reports can be made to the police non-emergency number at 935-3311 Crime Stoppers at 961-8300 or in an emergency to 911.

“As with any emergency-type situation, we are striving to balance the need for safety with our overall commitment to provide students and families with every sense of normalcy,” Farias wrote. “We appreciate your help as we work together to keep all of our students safe.”