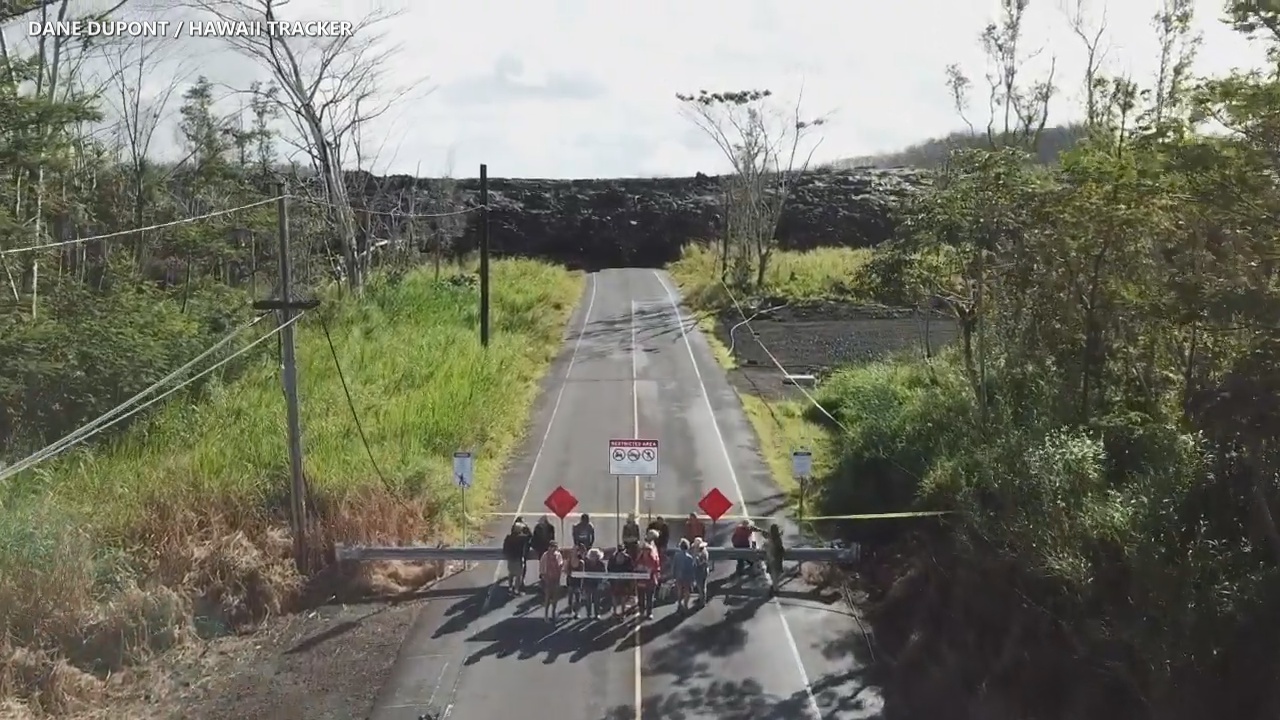 (BIVN) – Several Puna residents who live in areas cutoff by the 2018 eruption of Kīlauea Volcano gathered on Sunday morning in front of the hardened wall of lava on Highway 132 to share their story.

“We are a group of citizens in lower Puna that have organized all of our
associations, Imua Lower Puna, as we are continuing to ask for help,” said Smiley Burrows, one of the residents who participated in the show of solidarity. “We are organizing all of our associations so that we can gather our energy as a whole and fight for what we deserve in lower Puna, which is the federal funding to be used in our specific disaster area.”

A few residents stood holding a sign promoting a new website, imualowerpuna.weebly.com, which provides updates, information, and a community forum. 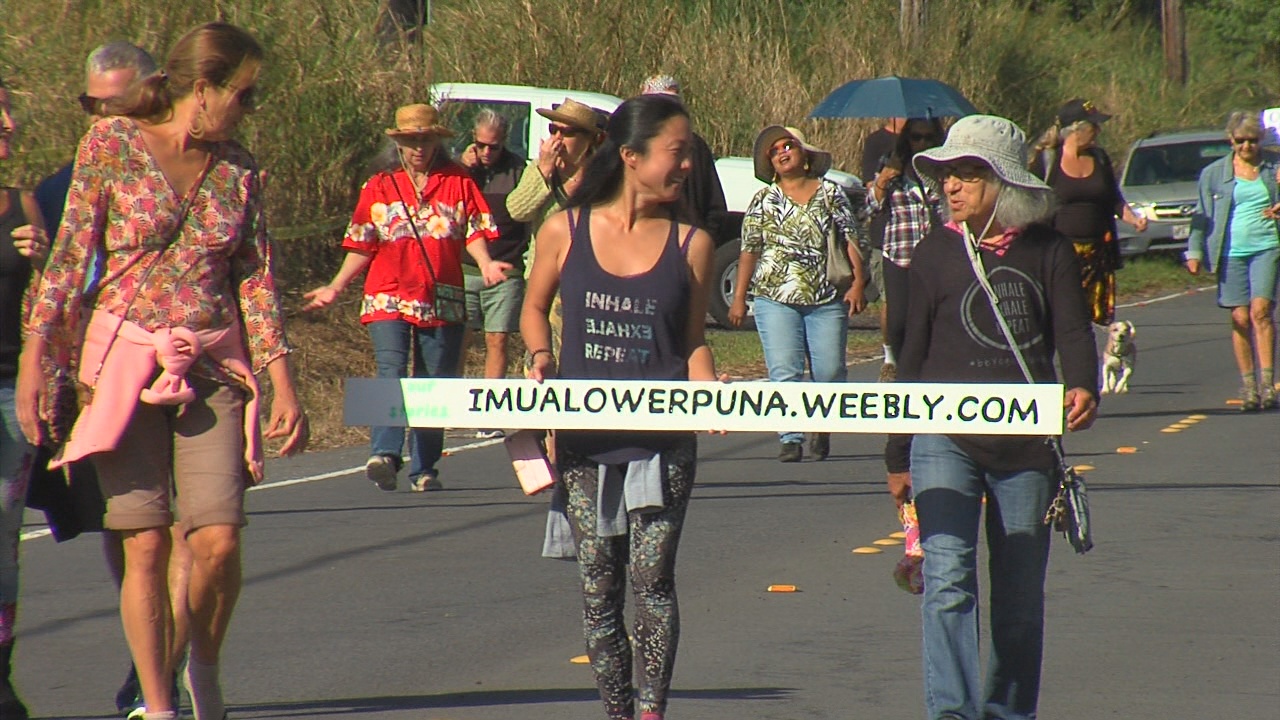 “This website is represents thousands of individuals who owned property in lower Puna and were affected by the disaster,” said Susan Kim, “and it also represents hundreds of residents who cannot go to their homes without temporary road access. So we’re organizing, we want our representatives to know.”

Puna’s State Senator Russell Ruderman was not in attendance, but he did provide a written statement which was read aloud by Burrows. It said:

Restoring access to lava-locked areas is the top priority needed for lava relief now. Those residents and farmers whose homes are still standing but cannot get to them are stuck in limbo. They need help getting back home to restart their lives. Access to homes is surely one of the most basic government services. Repairing roads so that people can return home is the simple, doable, humane thing our government should be doing as urgently as possible. While the long-term future plan for lower Puna is an open question, the current failure to provide access for the living, breathing, humans who today need to get to their properties is inhumane. These neighbors are watching their homes and farms decay without being able to care for them and their lives and livelihoods are stalled. Insurance or FEMA will not help these people. They have survived a geological crisis, but are now further harmed by a by a fixable political disaster. It’s time to open the roads.

This was not the first gathering of lava-locked residents. In late January, a larger group – 50 or more, participants say – gathered to raise a unified voice. 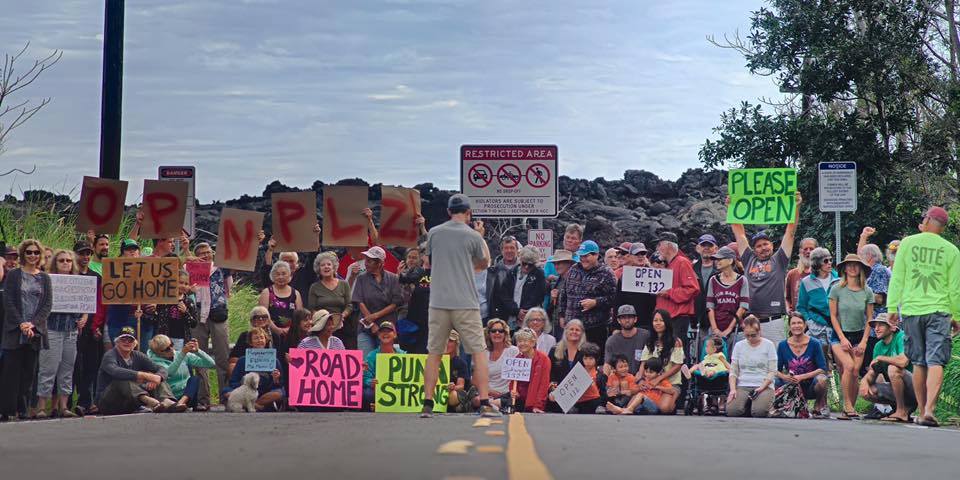 “We know that there’s hundreds of millions of dollars being allocated by FEMA, our state has [House Bill] 1180 crossing over to the Senate and we just want to make sure that the disaster funds are allocated to the disaster area and the disaster victims,” Kim said.

Former Puna councilowman Eileen O’Hara was at the Sunday gathering, and said there is more to redeveloping Highway 132 than just providing access to lava-locked homes. “It’s also about providing access for another thousand residents who previously used 132 but live on the other side of 132 and they are now weaving their way down little, tiny, dirt roads onto the government Beach Road and making their way up Kahakai Boulevard in order to get to civilization, which takes them about 45 minutes longer than it used to,” O’Hara said.

“That extra traffic on these little tiny roads is wearing the roads down,” O’Hara said, noting that “50 or 60” commercial trucks are using Government Beach Road to haul cinder from the pit that was spared by the lava and continues to operate. “It’s a public safety issue,” O’Hara said. “And we have about 6,500 people living in Hawaiian Beaches / Hawaiian Shores who are being negatively impacted by all of this as well.”

“It’s about all of us and we’re trying to form this coalition to be inclusive of everybody who is being impacted by this,” O’Hara said.