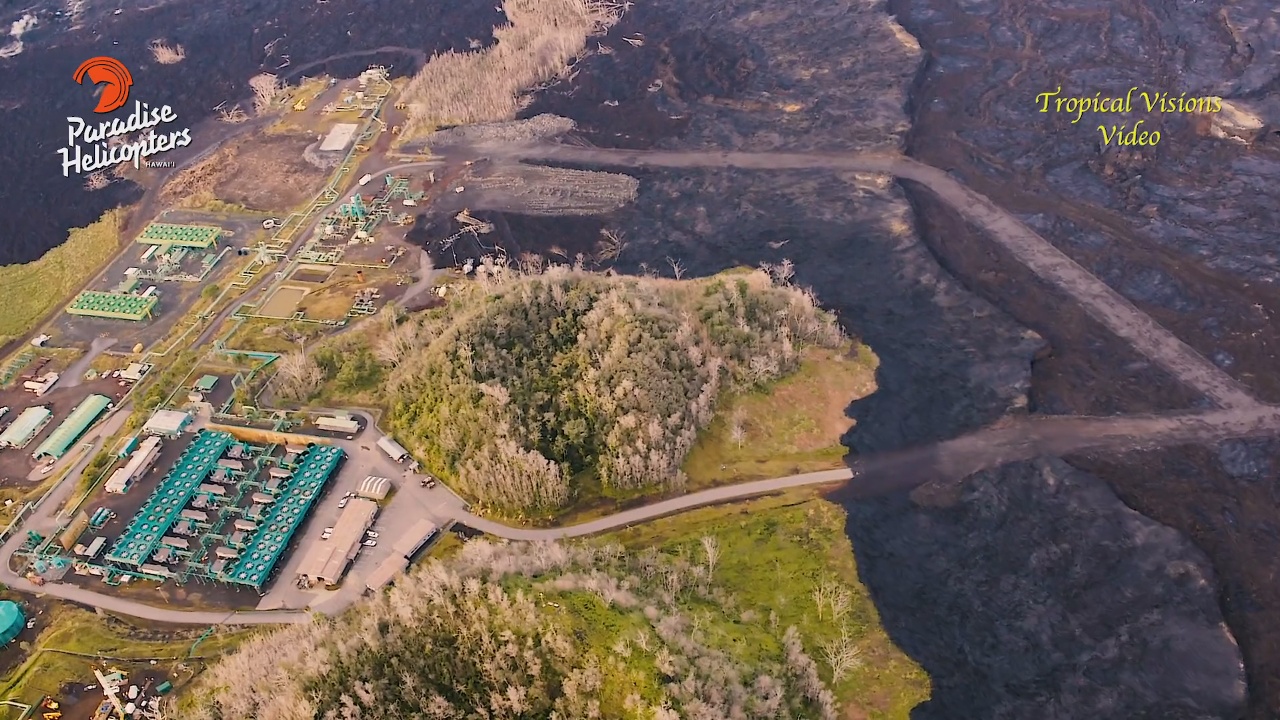 Geothermal Questions Answered By USGS Ahead Of Community Meeting

(BIVN) – A public meeting will be held Friday night regarding Puna Geothermal Venture, although scientists have already answered one set of pressing questions.

Puna Geothermal Venture, or PGV, shutdown operations during the 2018 eruption of Kīlauea Volcano on the lower East Rift Zone. The company has not been back online since. However, now that Kīlauea is quiet, PGV-parent company Ormat is working to bring the power plant back to life.

While PGV and its employees are looking forward to getting back to business, some in the community are not happy about it. A segment of the Puna population is opposed to the industry in their backyard, saying the facility poses a hazard due to its close proximity to residential neighborhoods.

Some even wonder if the geothermal facility had something to do with the 2018 eruption.

“So, now we are here in 2019, PGV’s enhanced fracking by forced reinjection for the last 30 years has blown out the side of the island by eroding the rift zone under Leilani Estates and Lanipuna Gardens,” wrote a Sara Steiner in a letter to several news publications and lawmakers, “yet for some reason PGV thinks the State and County are just going to sit back as usual and let them operate as nothing happened.”

“Why won’t our elected officials, civil defense, HVO scientists or permitting department heads look at the reality of the problem that geothermal is not safe use on an unstable active volcanic hot spot where there is human populations all around?” Steiner asked in another letter.

Following the recent Magnitude 5.5 earthquake on Hawaiʻi Island, Steiner penned another letter. This time, she asked scientists a direct set of questions (below).

“With PGV trying to insinuate itself back into Puna with certain trusted government agency blessings, it is ripe for HVO to make that assessment now and please do it as if your kids live in Leilani Estates, because it is time to think of the people and the environment first and foremost, not greedy fracking polluters trying to hide under the guise of renewable energy,” Steiner wrote.

On Thursday, the USGS Hawaiian Volcano Observatory responded with an email, and copied everyone listed as a recipient of Steiner’s initial email. Saying “here’s some science-based answers to your questions,” the scientists addressed her questions (in bold) one-by-one:

So, it would be really nice to hear from HVO about what happens to our underground rift zone when billions of gallons of cool chemical soup is reinjected under pressure for 30 years???

We are not sure what you mean by “billions of gallons of cool chemical soup.” Magma is certainly not characterized that way, and we don’t know of anything else that has been injected into the ground in that volume for 30 years.

Since you mention PGV in your last statement, perhaps this question is referring to geothermal drilling or fluid injection. If so, it is unlikely that PGV is injecting fluids at high enough pressures or volumes to affect the rift zone. If not, please clarify what you’re asking and we will try to answer.

Could it erode holes or fracture the ground so much that the lave sprang forth?

This question seems to suggest that you are attributing the 2018 lower East Rift Zone (LERZ) eruption to PGV. If not, please clarify what you are asking. If so, please note the following:

(1) The magma that eventually erupted in Puna was injected into the LERZ from Kīlauea’s summit and upper parts of the East Rift Zone near Puʻu ʻŌʻō hours-to-days before the LERZ eruption began. This NOAA animation depicts the earthquakes that occurred between April 30 and May 6, 2018. The earthquakes reflect the migration of magma from the summit/upper East Rift Zone to the LERZ just before and after the eruption began on May 3—and clearly show that the LERZ eruption did not originate with the PGV development.

(2) PGV is located on the East Rift Zone because a small hydrothermal resource heated by past eruptions is found there. Prior to the 2018 eruption, the most recent LERZ eruptions in Puna were in the 1790s (Lava Tree State Monument), 1840 (Kaohe Homesteads through Nanawale Estates), 1955 (Steam vent area along hwy 130 to Halekamahina), and 1960 (Kapoho)—well before PGV started drilling.

(3) Kīlauea is one of the most active volcanoes in the world. It was inevitable that, at some point, the Puʻu ʻŌʻō eruption would end and another eruption would begin on the volcano—and based on past activity, it was known that the next eruption could be located within the upper, middle, or lower part of the East Rift Zone. It just so happened that the 2018 eruption was on the LERZ.

(4) There is evidence of eruptive vents along the LERZ, both north and south of Leilani Estates. Unfortunately, many of the volcanic features indicative of the active rift—craters, cinder cones, steaming vents—were/are disguised by lush vegetation or have been removed by quarrying or grading, leading to a false sense of security in those areas. It was a matter of “when”—not “if”—another eruption would occur on Kīlauea’s LERZ as indicated by Zone 1 on the USGS lava-flow hazard zone map.

(5) The 2018 fissure is within Kīlauea Volcano’s lower East Rift Zone (LERZ) and was located between the 1955 and ~1790 fissures. Because of these (and other) earlier eruptions, the East Rift Zone was rated as Zone 1 on the Lava-Flow Hazard Map for Hawaiʻi Island. Zone 1 is defined as: “Includes the summits and rift zones of Kīlauea and Mauna Loa where vents have been repeatedly active in historic time.” These areas are the most dangerous because all, or nearly all, erupted lava first emerges from the ground within Zone 1. For more info on lava-flow hazards, please see this.


In a straight line of 24 fissures in front of the frackers??

We don’t know what you mean by “frackers.” But to address the “straight line of 24 fissures” part of your question … Vents that erupted in 2018 opened along the lower East Rift Zone, which is a more-or-less linear structure, so it is no surprise that the fissures erupted along a more-or-less “straight line.” This “line” of 2018 fissures passed south of the PGV property.

With more intensity than any recorded rift zone eruption???

While the 2018 LERZ eruption had some of the highest eruption rates ever measured on Kīlauea, they were likely similar to the 1840 eruption in this same area (Kaohe Homesteads through Nanawale Estates). Kīlauea has been capable of producing voluminous eruptions since it formed.

Which then drained all the lava in the LERZ storage units in 4 short months????

There is no evidence that “all the lava in the LERZ” drained during the 2018 eruption. Chemical analyses have shown that lava erupted from the initial fissures of the 2018 LERZ eruption had been stored in the rift zone since the 1955 eruption. In other words, not all the magma that moved through the rift zone in 1955 was erupted to the surface. What did not erupt was stored below ground until the recent intrusion of magma “pushed” it to the surface. The same is likely true for the 2018 eruption – it’s possible (even likely) that not all of the magma that intruded the rift zone erupted to the surface in May-August 2018.

“PGV officials will update the community on the status of the geothermal facility and ability for residents to use the “pioneer road” near the intersection of Highway 132 and Pohoiki Road that PGV cleared to restore access to its lava-locked site,” a media advisory stated. “Representatives from Hawaii Electric Light Co. (HELCO) and the County of Hawaii will also provide updates.”