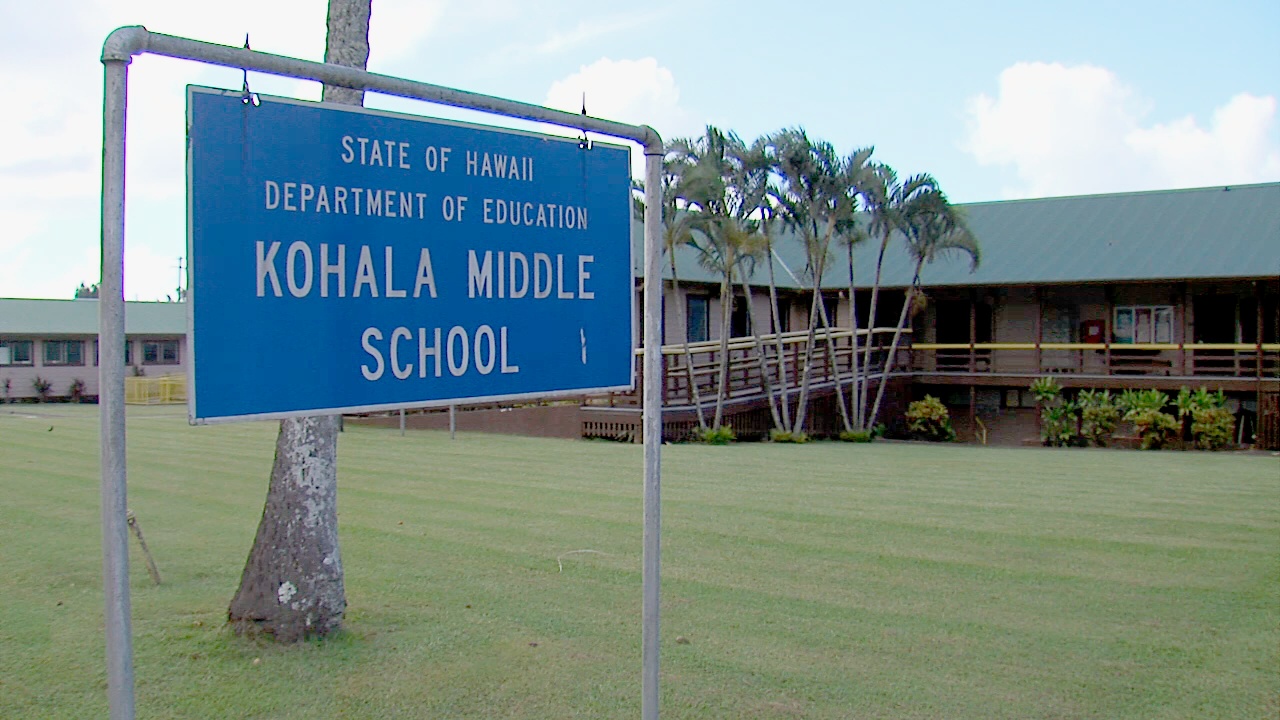 NORTH KOHALA, Hawaiʻi - Kohala Middle School was put on lockdown on Wednesday, at the instruction of Hawaiʻi County Police.

(BIVN) – Kohala Middle School was put on lockdown at approximately 9:35 a.m. this morning as a safety precaution at the instruction of Hawaiʻi County Police, a Hawaiʻi Department of Education spokesperson confirmed.

UPDATE: In a media release issued on Wednesday afternoon, Hawaiʻi Police say officers responded to the area of Wainaia Gulch near the 24-mile marker on Route 270 after receiving a report of a person who appeared to be in distress. “Upon locating and approaching the 37-year-old male, officers heard a single gunshot that came from an unknown location, which struck the male party,” police say. “Officers transported the victim out of the area to the nearest medical facility. He is reported to be in serious condition. Preliminary investigation has shown that the victim was shot twice.”

“Hawaii Police were on campus during the lockdown, all students were safe and parents were kept notified by SchoolMessenger texts,” the Hawaiʻi DOE stated. “The lockdown was lifted at 1:35 p.m. after police opened one lane and buses and vehicles could access the area.”

Just after 10 a.m., Hawaiʻi Island Police issued an alert asking residents to avoid Akoni Pule Highway between Iole Road and Halaʻula Road. One lane was open to traffic before 2 p.m.

The incident comes during a time of heightened tension in North Kohala due to a recent manhunt involving the pursuit of 41-year-old Walter Gomes III of Kona.

Officers found Gomes, a suspect in a Kona shooting, in the area of Hawi on March 21, and fired shots into his vehicle. “The pursuit ended when the suspect broad-sided a police vehicle, abandoned his vehicle and fled into a dense brush area,” police said. “He has not been located yet.”

UPDATE: Police say they do not believe today’s incident is related to the  search for Gomes, “contrary to information in social media posts,” police stated Wednesday afternoon. Still, school officials were already taking precautions due to the Gomes manhunt before this morning.

“In light of recent events involving a fugitive in the Kohala region, the police department will have an increased presence around our school campuses,” a social media message from the Kohala Middle School stated over the weekend. “The safety of our students, families, teachers and staff is first and foremost.”

“We appreciate the cooperation of citizens and Neighborhood Watch groups for being our eyes and ears on the street,” said Lieutenant Roylen Valera of the Area II Criminal Investigations Division in a police update on the manhunt issued on Monday, March 25. “Events like these are a great example of how an organized Neighborhood Watch Group can significantly enhance community safety and awareness by sharing information and noticing things that are out of place,” Valera said those who are interested in joining or forming a Neighborhood Watch Group should contact the Community Police Officer in their area.

Police ask those who may have witnessed today’s incident or who may have information to contact Lieutenant Roylen Valera at (808) 326-4646 extension 230 or via email at roylen.valera@hawaiicounty.gov.