HONOLULU, Hawaiʻi - State officials held a press conference on Oʻahu today to announce $2.5 million has been allocated to bolster marketing efforts in the U.S. mainland and Japan. 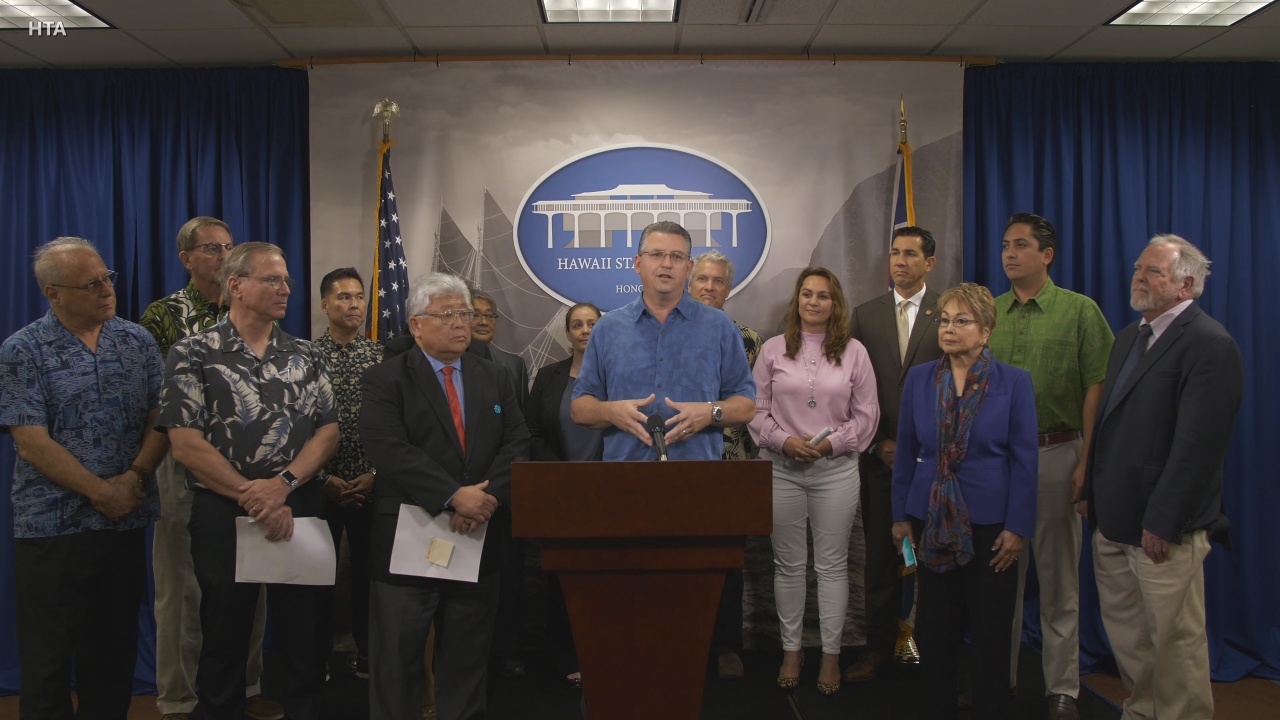 (BIVN) – State officials are launching a new branding campaign to support Hawaiʻi Island tourism, with an emphasis on marketing to the U.S. mainland and Japan.

Today, lawmakers stood side-by-side with tourism executives for a press conference at the State Capitol. Hawaiʻi Island State Representative Richard Onishi, who chairs the House Committee on Tourism & International Affairs, announced a $2.5 million allocation recently approved by the Hawaii Tourism Authority’s Board of Directors to support the campaign.

The Hawaii Tourism Authority and House of Representatives issued a joint media release with the details:

Tourism on the island of Hawaii – the island’s leading industry – is receiving some much-needed support with an emphasis on new branding initiatives and increased marketing funding for its two largest markets, the U.S. mainland and Japan.

On March 28, the Hawaii Tourism Authority’s (HTA) Board of Directors approved reallocating $2.5 million in funding to support new marketing efforts to help the island of Hawaii recover from the falloff in tourism stemming from Kilauea’s change in volcanic activity that began 11 months ago.

Representative Richard H. K. Onishi, chair of the House Committee on Tourism & International Affairs and whose district covers Hilo, Keaau, Kurtistown, and Volcano, said this added emphasis to help businesses, communities, and residents on the island of Hawaii is appreciated.

“The Legislature last week approved an additional $60 million in emergency relief funding to repair damaged infrastructure,” said Onishi. “But money for infrastructure alone will not fix the damaged economy. That is why I was gratified to learn that the HTA is stepping up to the plate to provide funds to help revive Hawaii Island’s economy.”

Chris Tatum, HTA president and CEO, said the campaign is a collaborative effort to enhance how the island of Hawaii is perceived by travelers now that Kilauea volcano is idle, while also supporting businesses and jobs affected by the drop in business over the past year.

“We are very thankful to Chair Onishi and the state lawmakers for supporting the overall direction HTA is taking to do what is best for the community’s future on the island of Hawaii,” said Tatum. “This new branding campaign is needed to help enhance how travelers see the island of Hawaii as a destination and to revitalize tourism for the good of businesses and residents who rely on its sustainability.”

Funding to Support Branding in U.S. Mainland and Japan

The $2.5 million reallocated by HTA will be utilized by Hawaii Tourism United States ($1.5 million) and Hawaii Tourism Japan ($1 million) to implement a series of new branding, marketing and publicity programs. This funding complements the ongoing marketing and promotional programs being implemented by HTA’s Global Marketing Team in accordance with the guidance provided by the Island of Hawaii Visitors Bureau.

The new branding programs in the U.S. mainland and Japan will employ a variety of communication tactics to reach travelers in prime regional areas via marketing, promotions, sales blitzes to travel trade professionals, and public relations.

Among the planned programs is a high-profile bus tour that will carry island of Hawaii representatives and Hawaiian cultural practitioners, making stops in key cities on the West Coast to promote travel opportunities to the destination and showcase the vast number of attractions and activities visitors can enjoy island-wide.

Kilauea, one of the world’s most active volcanoes, erupted on May 3, 2018, in the lower Puna area on the island’s east side. Kilauea continuously poured out lava over the next five months covering approximately 13.7 square miles of land and destroying more than 700 homes.

Although the affected area in lower Puna comprised less than one percent of the island of Hawaii, which measures 4,028 square miles and is larger than all of the other Hawaiian Islands combined, businesses island-wide suffered significant losses in revenue, as many visitors began choosing to avoid the island due to concerns about the lava flows and air quality.

Impact of Kilauea Eruption on Island of Hawaii Tourism

The impact that Kilauea volcano’s eruption has had on tourism for the island of Hawaii over the past year is reflected in its visitor statistics.

As published through April 2018, island of Hawaii tourism was on a record-setting pace through the first four months of the year with the growth in visitor spending (+12.7 percent to $967 million) and visitor arrivals (+12.5 percent to 648,738 arrivals) significantly ahead of the previous high totals in 2017.

In the eight months that followed in 2018, visitor spending and arrivals steadily declined on the island of Hawaii with the year-end figures showing that visitor spending had flattened (+0.2 percent to $2.40 billion) and visitor arrivals declined (-2.5 percent to 1,718,181 arrivals) compared to 2017.

Tatum commented, “With this new marketing campaign, our goals are to help reverse this continuing decline and emphasize to travelers the positive message about the abundance and diversity of attractions, activities, and sites to see and enjoy on the beautiful island of Hawaii.”