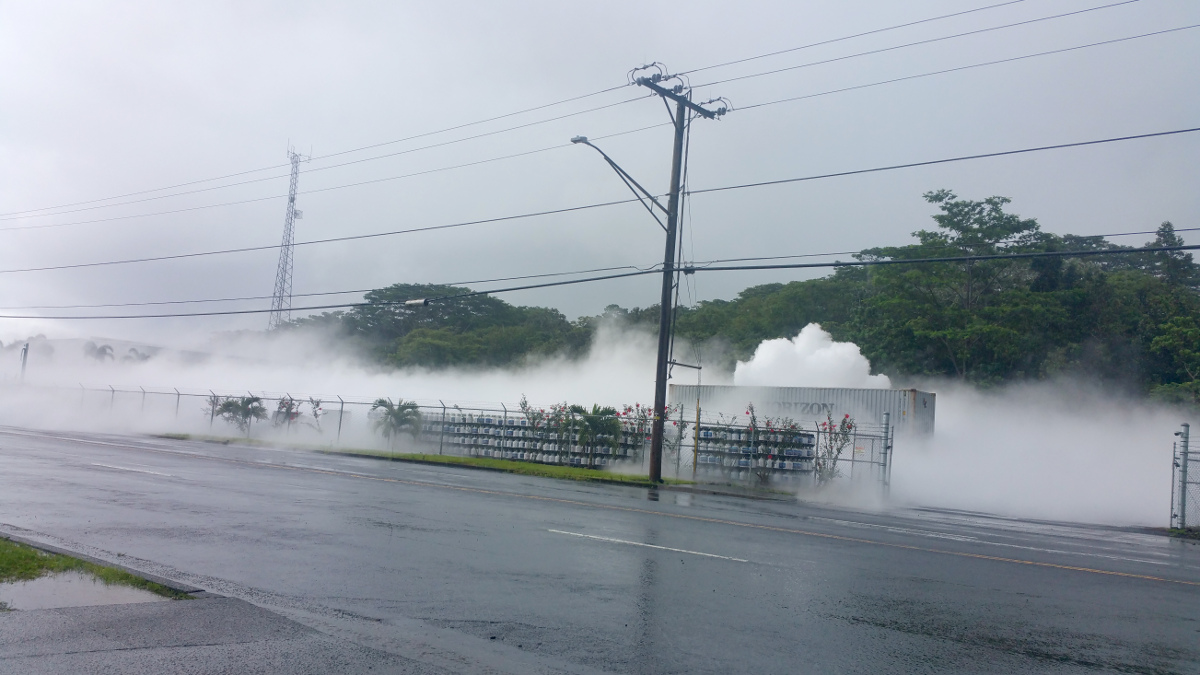 KEAʻAU, Hawaiʻi - A large, highly flammable propane gas cloud was created after a valve was torn off, resulting in a HazMat scare in Keaʻau today.

(BIVN) – A dangerous, floating cloud of gas resulted in the temporary closure of Shipman Industrial Park in Keaʻau today, and forced companies operating in the area to shelter in place.

No one was injured by the cloud of propane gas, which was created when a valve was reportedly torn off a Liquefied Petroleum Gas, or LPG, container, fire officials say.

The fire department responded to Kipimana Street, between Melekahiwa Place and Kalapa Place, just after 11 a.m., and found a “large vapor cloud” in area moving with light winds. Traffic was stopped to Shipman Industrial Area, and the source was identified as “a torn off fill valve located at the bottom of a 20’ LPG shipping container (24 sq meter/ ~6,300 gallons),” a fire dispatch stated.

The liquid LPG “formed a large ice flow of LPG under the container, which released a large cloud of visible Propane gas,” the fire department said.

The cloud propane cloud, which the fire department says can be highly flammable and is heavier than air, moved over the surrounding area in the variable winds and raining conditions. “Neighboring properties were instructed to shelter in place and extinguish any outside flame/industrial sources, vehicles included,” the dispatch said.

The Hawaiʻi County Fire Department HazMat unit “used monitors to assess the flammable zone of the propane and dispersed the cloud with water fog nozzles.”

Because the leak was liquid, the source was depleted quickly, fire officials say. Once the gas was dispersed, the area reopened to commerce.

The fire department said it did not know who the owner is of the “industrial lot used for storage of Propane,” that had “multiple industrial sized storage containers and large quantity of small 5 gallon propane containers.”