HAWAIʻI ISLAND - The USGS Hawaiian Volcano Observatory is reiterating its position that geothermal drilling did not cause the lower East Rift Zone eruption. 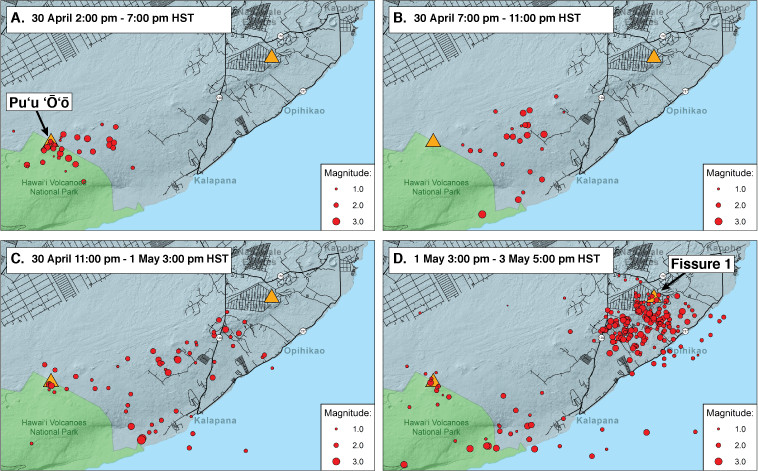 Earthquakes (red dots) track the progression of the magmatic intrusion from Kīlauea Volcano’s middle East Rift Zone to the lower East Rift Zone between April 30 and May 3, 2018. Orange triangles show the locations of fissure 1 (right), which erupted on May 3, and Puʻu ʻŌʻō (left). The earthquakes shown here are well-located with magnitudes less than 3.5 and depths shallower than 7 km (4.3 miles). USGS graphic.

(BIVN) – In this week’s Volcano Watch article – as well as a recent radio interview – the USGS Hawaiian Volcano Observatory is again saying that the 2018 eruption of Kīlauea Volcano was not triggered by Puna Geothermal Venture.

Since the eruption in lower Puna began in May 2018, and as recently as a few weeks ago, some concerned residents have suggested there could be a connection between the power plant and the location of the fissures that emerged on the lower East Rift Zone.

Sara Steiner, for example, questioned the USGS in a series of public letters. The scientists replied in March 2018.

Henry Curtis also explored the topic on his website, Ililani Media, citing multiple sources linking earthquakes in other places around the globe to geothermal power plant activity in those areas.

USGS HVO Scientist-in-Charge discussed the matter on a recent episode of Island Issues with Sherry Bracken.

The geothermal question was again addressed in the latest Volcano Watch article, the weekly article and activity update written by USGS HVO scientists and affiliates. They wrote:

What caused—or did not cause—the 2018 Kīlauea eruption?

When a major geologic event occurs, scientists who study such events and the people who are directly or indirectly impacted by it seek to understand its cause. Often, a first step toward that understanding is to rule out what did not cause the event.

The USGS Hawaiian Volcano Observatory has received several inquiries about the cause of Kīlauea Volcano’s 2018 lower East Rift Zone eruption. Specifically, we’ve been asked if the eruption was caused by or related to geothermal drilling and energy production on Kīlauea’s East Rift Zone.

The short answer is “no”—there is no credible model that connects geothermal operations to Kīlauea’s 2018 eruption. We’ll explain by starting with some facts about the volcano:

First and foremost, Kīlauea is one of the most active volcanoes in the world. The exposed part of the volcano covers itself with new lava every thousand years or so. Thus, it’s a matter of “when”—not “if”—an eruption will occur on Kīlauea.

The rift zones and summit on Kīlauea (and Mauna Loa) are identified as Zone 1 on the USGS Lava-Flow Hazard Map for Hawaiʻi Island, which is where the majority of erupting vents have been located in recent centuries. These areas are the most dangerous because, in nearly all Hawaiian eruptions, lava has first emerged from the ground within Zone 1 and quickly flowed into Lava Flow Hazard Zone 2.

By April 2018, Kīlauea had been erupting essentially nonstop for over 35 years. It was inevitable that, at some point, the Puʻu ʻŌʻō eruption would end and another eruption would begin on the volcano. It was also fairly certain that, based on past activity, the next eruption would likely occur somewhere on Kīlauea’s East Rift Zone.

Seismic and deformation data from the 2018 eruption show that magma was injected into the lower East Rift Zone (LERZ) from the middle part of Kīlauea’s East Rift Zone near Puʻu ʻŌʻō between April 30 and May 3. A NOAA animation depicts the earthquakes that occurred on Kīlauea during that time. These earthquakes propagated eastward at a pace of about 1 km per hour (0.6 mi per hour) over three days as magma forced its way through subsurface rock, until erupting to the surface as fissure 1 on May 3. It clearly shows that the downrift migration of magma began near Puʻu ʻŌʻō rather than in the LERZ.

The initial intrusion of magma stopped beneath Pohoiki Road southwest of the geothermal development. On May 9, seismicity indicated that the intrusion had reactivated and was moving eastward toward Kapoho. After another short pause, the magma continued its subsurface advance until it reached its easternmost point near the south end of
Halekamahina Road.

The subsequent opening of 24 fissures in the vicinity of Leilani Estates on Kīlauea’s LERZ was not unprecedented or particularly surprising. Eruptions occurred in this same area in 1960 (Kapoho), 1955 (steam vents on Highway 130 to Halekamahina), 1840 (Kaʻohe Homesteads through Nānāwale Estates), around 1790 (Lava Tree State Monument), and earlier. These previous eruptions happened well before geothermal operations began on the LERZ.

The final locations of fissures 16-22 have led some people to ask if there might be a relationship between the eruption and geothermal operations. These operations are located on the LERZ because past eruptions have produced a small hydrothermal resource deep beneath that area.

The combination of repeated pre-geothermal LERZ eruptions (1790, 1840, 1955, and 1960), the clear movement of magma from Puʻu ʻŌʻō into the LERZ, and the temporary halt in magma propagation west of the geothermal development all indicate that geothermal operations played no discernible role in triggering the eruption.

The actual causes of the LERZ eruption are likely the pre-eruption build-up of magmatic pressure at Kīlauea’s summit combined with long-term weakening of the rift zone. The relationship between magma supply, magmatic pressure, and strength of the volcanic edifice are the typical culprits for most volcanic eruptions around the world.

Impacts of the LERZ eruption were devastating, but the reason for the lava flow is no simpler than the fact that we live on an active volcanic island. What happened in 2018 is part of Kīlauea’s natural process and was not influenced by human actions. The volcano behaved as it has many times in the past.