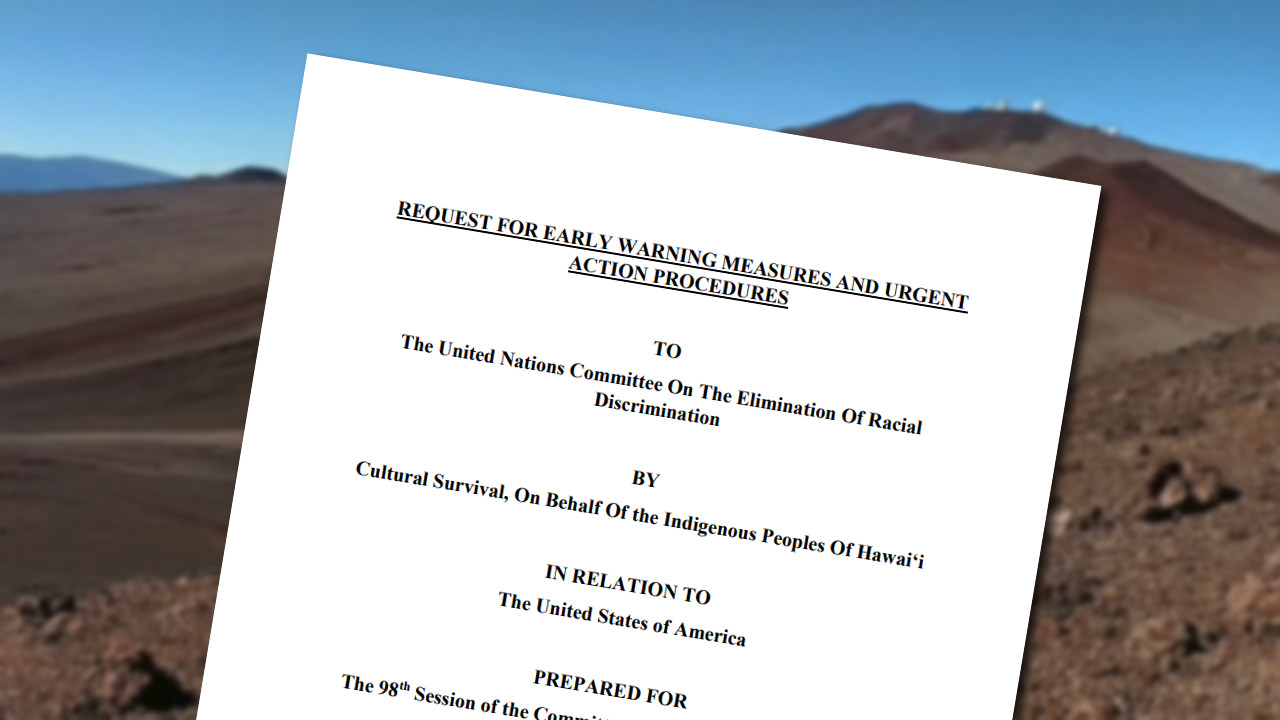 (BIVN) – An international Indigenous rights organization is trying to take the issue of the Thirty Meter Telescope planned for Mauna Kea to a United Nations committee, and is requesting other States and international organizations sponsoring TMT to withdraw their support.

A Request For Early Warning Measures and Urgent Action Procedures has been made to the United Nations Committee On The Elimination Of Racial Discrimination by the Cambridge, Massachusetts-based non-profit Cultural Survival, “on behalf of the Indigenous Peoples of Hawaiʻi” in relation to the United States of America. A report was prepared by the organization for the 98th Session of the UN committee and submitted on March 22, 2019.

The 19-page document submitted by the Cultural Survival organization “details the discrimination that Native Hawaiians have faced due to the support from the State of Hawai‘i and the United States of America” for  siting the Thirty Meter Telescope on Mauna Kea, “the tallest mountain in the Pacific and a sacred place for Native Hawaiians.”

“This request highlights persistent violations of multiple provisions of the International Convention on the Elimination of All Forms of Racial Discrimination,” the document states. “The State has continued to actively support development projects on Mauna Kea, despite plain evidence that doing so would degrade the religious and cultural practices of Native Hawaiians and deny them their rights to own and access their traditional lands and territories.”

“Native Hawaiians face the very real probability that construction of the telescope will begin in spring 2019, and therefore urgently request the Committee’s immediate attention to the situation,” Cultural Survival wrote. “The Committee’s adoption of a decision under its Early Warning and Urgent Action Procedures is necessary to prevent further and irreparable harm to indigenous peoples’ lands and practices.”

UPDATE – Not all Native Hawaiians oppose the project. When informed about the Cultural Survival request, Richard Ha – a board member of the non-profit PUEO (or Perpetuating Unique Educational Opportunities) – noted that “PUEO supported the TMT during the contested case hearings. TMT brings Economic opportunities as well as Educational opportunities to Native Hawaiians. The ancient origin chant the Kumulipo, talks about Po, the time of darkness. The TMT will allow us to look further back in time than we have ever seen.”

The Cultural Survival request details the set of events that led to opposition arrests on Mauna Kea in 2015, as well as the eventual Hawaiʻi Supreme Court decision in favor of the Hawaiʻi Board of Land and Natural Resources permit allowing TMT to be constructed on the mountain. “This was the last State recourse for the Native Hawaiians. As it now stands, construction could potentially begin at any time,” the Cultural Survival request reads, stating that “Native Hawaiians have exhausted all domestic remedies.”

While relief could still be sought through the United States Supreme Court, the process would be unduly prolonged and any result would not be effective. Because the Court will not issue an injunction before deciding whether to grant or deny certiorari, construction could begin while waiting to hear if the Court would even hear the case. Furthermore, cases before the United States Supreme Court can take an unduly burdensome amount of time to be resolved once certiorari is granted. It is not unreasonable to assume that it could take more than two years to get a decision from the Court, if one is given at all. This process would only serve to exhaust the emotional and financial resources of Native Hawaiian litigants, who would have to seek additional representation and travel back and forth between Hawai‘i and Washington, D.C.

Because the United States has failed to adopt many of the optional protocols of the United Nations human rights treaties, Native Hawaiians are tremendously limited in their ability to seek redress internationally. The failure of the United States to sign protocols that would give greater accountability through individual complaint mechanisms, along with the clear domestic bias against members of the Native Hawaiian race and the imminent threat of construction, means that CERD’s early warning / urgent action procedures are the only way to bring adequate attention to this issue.

After alleging “the construction of this Telescope would cause irreparable harm to the Indigenous People of Hawai‘i,” and arguing that “the State has repeatedly failed to prevent, and has engaged in, discrimination against Native Hawaiians,” the Cultural Survival organization lays out its request that the Committee adopt a decision:

Agnes Portalewska, the Communications Manager for Cultural Survival, says they have not heard back from the committee yet, aside from the fact that the committee received the documents.