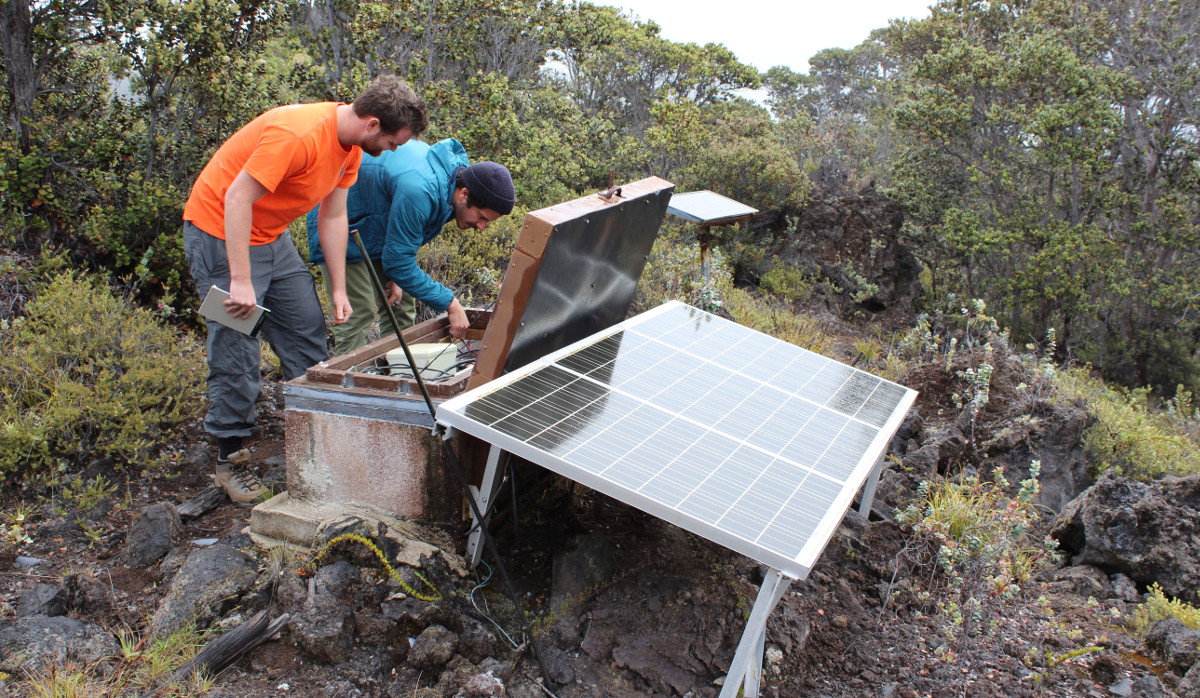 HVO scientists inspect a seismic station on Mauna Loa to evaluate for a possible equipment upgrade in the near future. Image courtesy USGS Hawaiian Volcano Observatory.

HAWAIʻI VOLCANOES NATIONAL PARK - Scientists have been checking out monitoring instruments on Mauna Loa, and even repaired a webcam at the summit of Earth's largest, active volcano. 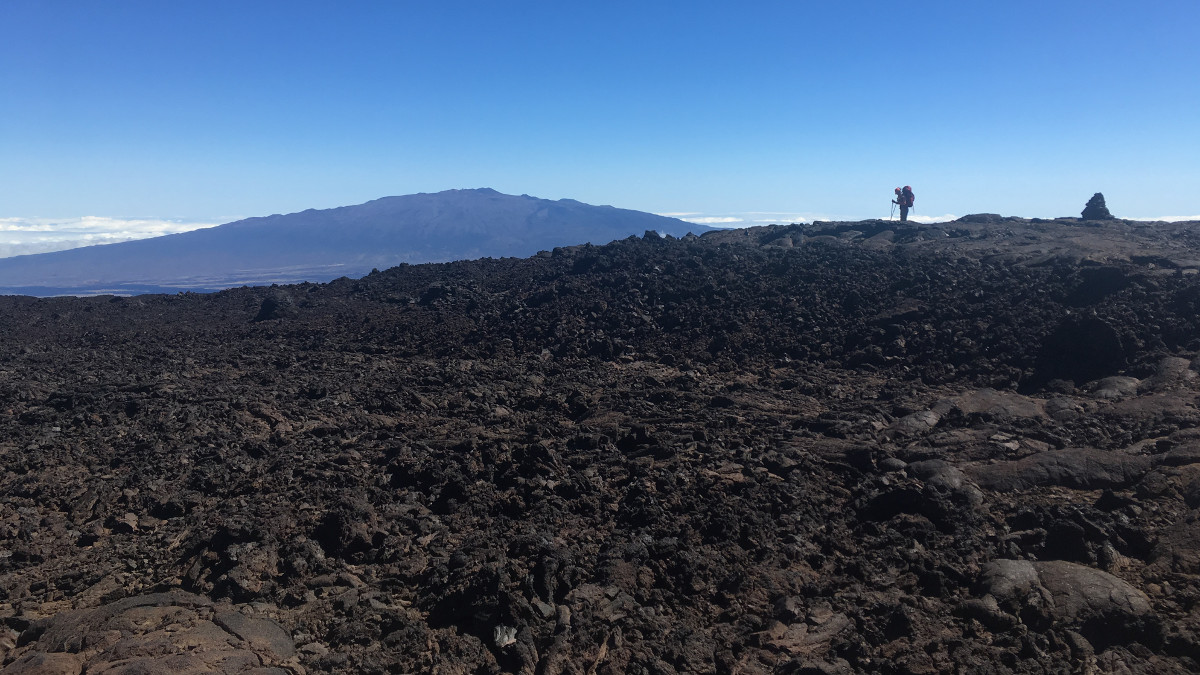 (BIVN) – In recent weeks, the USGS Hawaiian Volcano Observatory has been working to complete a GPS campaign on Mauna Loa, “which involves temporary deployments of high-precision GPS receivers to collect data that will help refine models of the volcano’s inflation”, scientists say.

Photos uploaded to the USGS HVO website show scientists trekking over the volcanic landscape, checking out monitoring equipment and even repairing a webcam.

Mauna Loa is not erupting, but scientists continue to monitor the volcano closely. 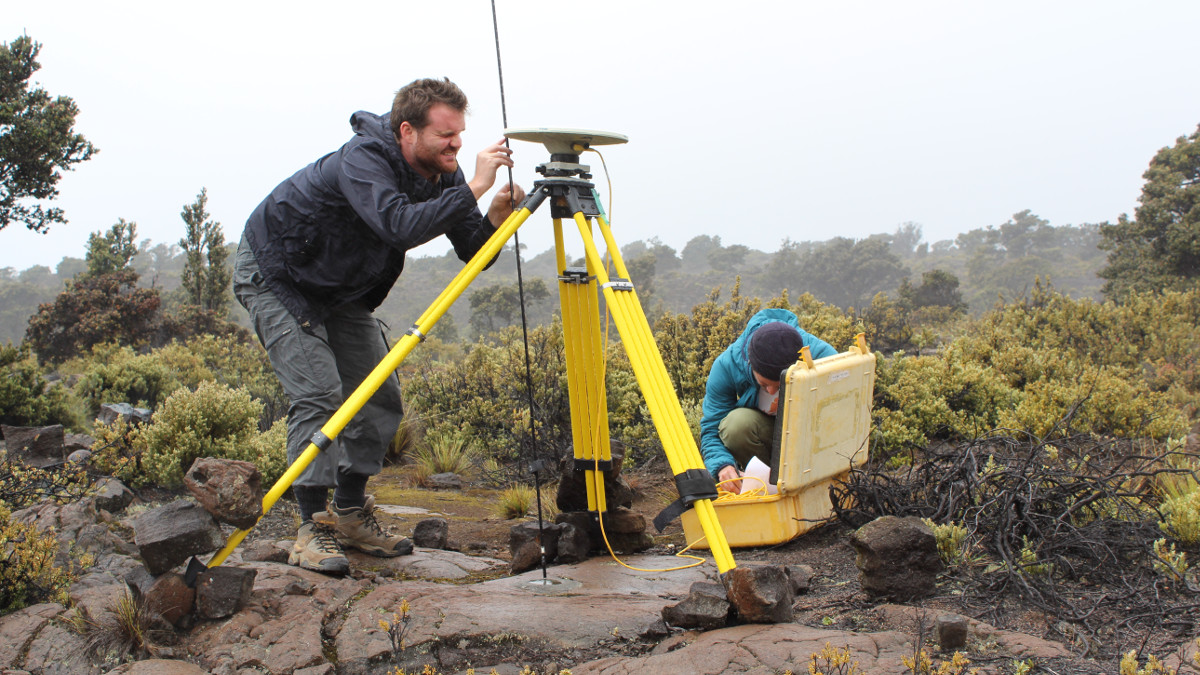 HVO scientists measure a GPS instrument to ensure its stability during a multi-day deployment in the Kahuku Unit of Hawai‘i Volcanoes National Park. USGS HVO photo.

Hawaiian Volcano Observatory staff also visited the summit of Mauna Loa on foot to repair the webcam on April 24. “The weather was perfectly clear and views of the caldera floor showed nothing unusual,” USGS noted.

Mauna Loa is the largest active volcano on Earth, scientists say. It last erupted 35 years ago, in 1984. “Eruptions typically start at the summit and, within minutes to months of eruption onset, about half of the eruptions migrate into either the Northeast or Southwest Rift Zones,” the USGS Hawaiian Volcano Observatory says. “Since 1843, the volcano has erupted 33 times with intervals between eruptions ranging from months to decades.”

Mauna Loa’s elevated unrest seemed to subside in 2018, however, when Kilauea stole everyone’s attention with a destructive eruption on its lower East Rift Zone and a collapse at its summit. The alert level for Mauna Loa dropped to NORMAL/GREEN.

In April 2019, USGS Hawaiian Volcano Observatory Scientist-In-Charge Tina Neal said geologosts observed a return to inflation and slightly elevated earthquake counts at Mauna Loa, meaning “the lull or the quieting we saw in early 2018 has ended, and we’re now looking at a slight uptick in activity,” she said.

“The bottom line is that we are still watching Mauna Loa very carefully and it could well be moving towards a period of increased concern, but we have yet to raise the alert level from its lowest, quiet state to the next step up,” Neal said. “We would need to see this pattern continue for a little while longer and then maybe have some different characteristics.”