KEAUHOU, Hawaiʻi - As a precursor to the Ho‘oilina Conference, Kamehameha Schools and the Polynesian Voyaging Society hosted Sealaska leaders on a visit to Keawewai and its native forest. 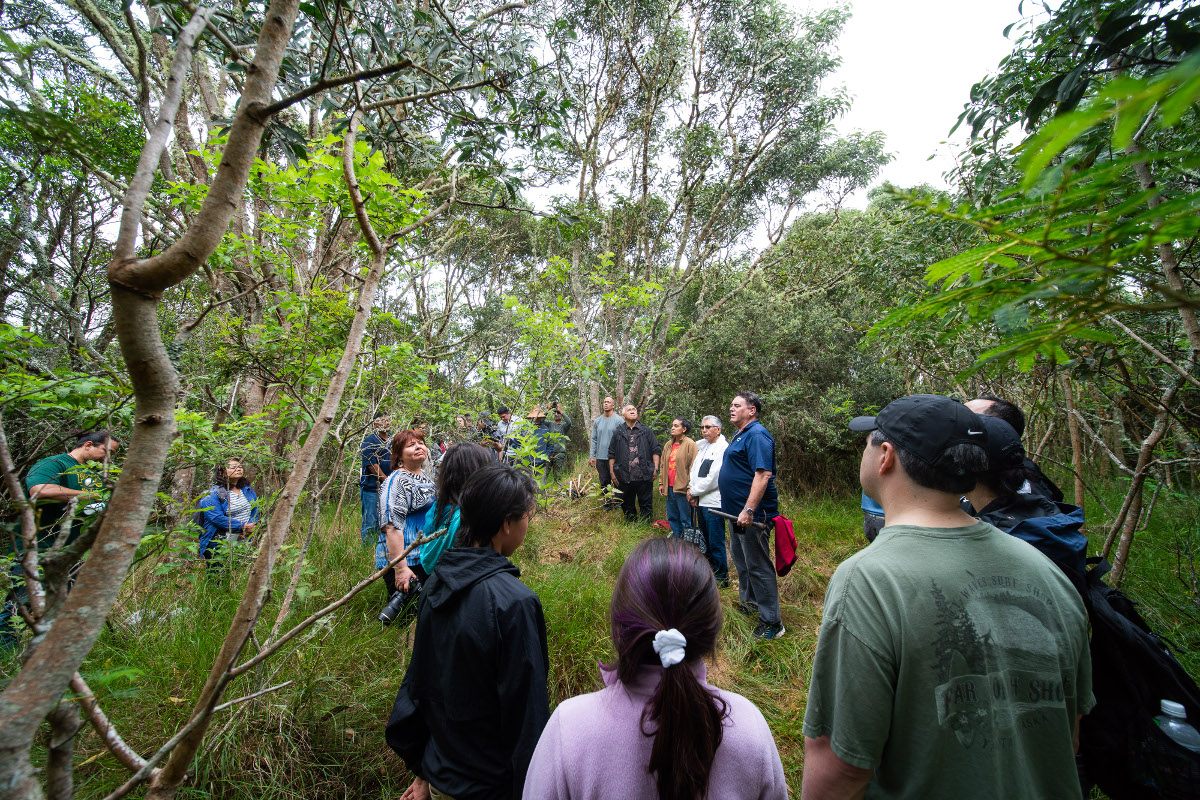 (BIVN) – Three decades after a visit to accept the gift of two Sitka spruce logs to be used for building the Hawaiʻiloa canoe, the Hawai‘i-Alaska kinship – and a “shared commitment to ancestral knowledge and nature” – was reaffirmed with a return to a Hawaiʻi Island koa forest.

Monday’s revisit to Kamehameha Schools’ Keawewai and its native forest on the upper slopes of Keauhou took place 30 years after Native Hawaiian and Alaskan leaders gathered in ceremony to promote the restoration of Hawai‘i’s declining koa forests.

Kamehameha Schools (KS) and the Polynesian Voyaging Society (PVS) hosted Sealaska leaders on a day trip as a precursor to the Ho‘oilina Conference. The three-day event is hosted by ʻAha Moananuiākea, a Pacific consortium sponsored by KS that includes PVS, Bishop Museum, and the University of Hawai‘i System.

“The conference is a collaboration with Alaska Native leaders representing various tribal organizations, the university and public school systems, government offices, and cultural practitioners in Alaska,” a joint KS and PVS media release stated. “The Hoʻoilina Conference seeks to bring the Alaska and Hawai‘i communities together to share navigation and wayfinding traditions, celebrate the advancement of native language, envision a brighter future for the Pacific Ocean, and affirm how culture can heal indigenous communities in body, mind, and spirit.”

According to the media release:

In 1989, the Native Hawaiian Culture and Arts Program, based at the Bishop Museum, and the Polynesian Voyaging Society (PVS) were unable to locate suitable koa trees to create a traditional Hawaiian voyaging canoe because Hawaiʻi’s forests were in decline. In 1990, Tlingit elder and then Sealaska Board Chair, the late Judson Brown, and then CEO of Sealaska Byron Mallott, gifted two Sitka spruce from Shelikof Island, Soda Bay, Prince of Wales Island with the belief that the Alaska and Hawaiʻi communities would forge a special bond and their descendants would be enriched, inspired and would carry their cultural legacies forward. The Sealaska, PVS and Hawai‘i relationship drew wide attention to the decline of Hawai‘i’s koa forests and led to the growth of the Koa Reforestation Program, a formal program whereby the Kamehameha Schools community and students made regular visitations up to the forest to stay for several days to focus on reforestation as well as cultural and spiritual growth. As a result, there are areas forested with koa today that are well on their way to generating tall healthy koa trees so that future generations may someday construct traditional canoes like Hawai‘iloa and Hōkūleʻa, but made with Hawai‘i’s own native koa timber. 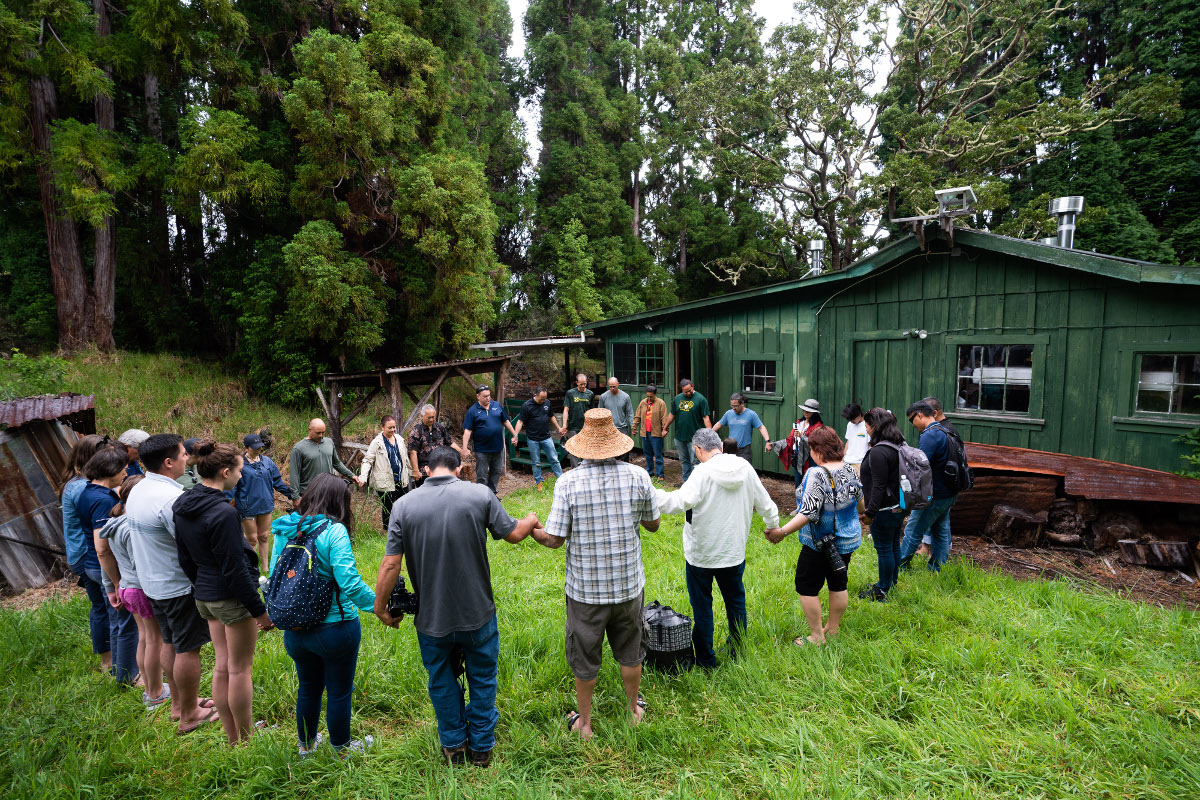 The joint media release included video and photos of the gathering at Keawewai, and documented Monday’s return to the forest.

The purpose of yesterday’s visit was to remember, honor and celebrate those acts of kindness that have strengthened the bonds of kinship between Hawaiʻi and Alaska and helped restore this sacred environment.

“Continuing to build relationships with Hawaiians and other indigenous people is important to Sealaska,” Sealaska President and CEO Anthony Mallott said. “The Hawaiian and Tlingit, Haida and Tsimshian people have a deep connection as ocean and canoe people, who are deeply tied to their environment. Good relationships between indigenous people who have common histories can help advance common goals.”

Yesterday’s visit started with a stop at Kīlauea to offer chant and request permission to visit the sacred land of Keauhou. After arrival at the native forest, the group was able to witness the growth of the forest since 1990 – a result of KS’ koa reforestation efforts that involved students and the community. Each person then planted native plants pa‘iniu and ‘ōhāwai followed by prayer, chant and reflections from the group about the importance of working together in unity to protect nature, as well as the knowledge and traditions of our ancestors.

“We planted seedlings back in 1990 at a site we are visiting today. The purpose of this is to say we honor that act, and we celebrate the past, and as we are celebrating and remembering we are planting new seeds for the future,” Fong said.

Hōkūleʻa is preparing for the Moananuiākea Voyage (circumnavigation of the Pacific) that is scheduled to launch from Alaska in 2021.