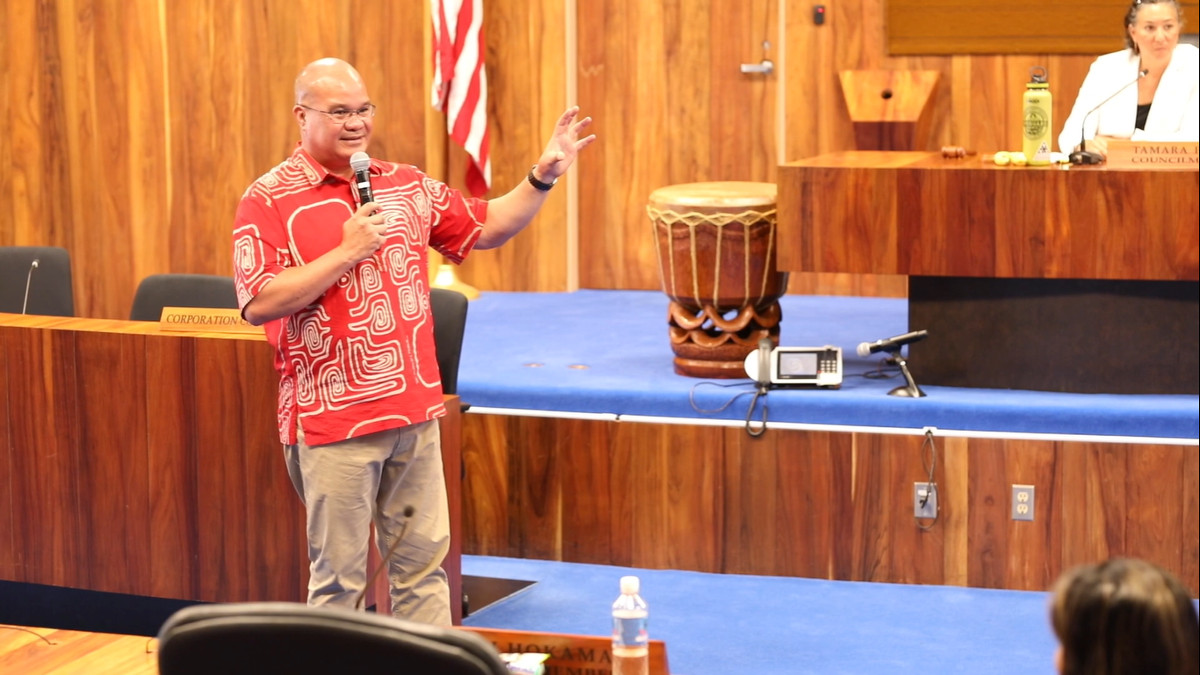 On Hawaiian Kingdom, Maui County Goes Where Hawaii County Would Not

HAWAIʻI - Unlike the divisive events that occurred one year ago at the Hawaiʻi County Council, the Maui County Council has been having a thorough conversation about international law.

On May 15, Dr. Keanu Sai, a political science professor at the University of Hawaiʻi, made a presentation to the Maui County Council regarding the status of Hawai‘i as an occupied nation State under international law. Sai returned to Maui to give another talk on June 5, and made recommendations for how the local legislators can move forward with the information he presented, if they so choose.

Sai’s research explains how Hawaiʻi is under a form of occupation by the United States resulting from “an illegal military occupation and a fraudulent annexation”, and that international law dictates that Hawaiian Kingdom law should be upheld by the occupier.

Its a difficult – and controversial – premise for present State and County governments to accept. Yet during both meetings on Maui, county councilmembers sat and listened intently to what Sai had to say, and then asked follow-up questions.

The scene stood in stark contrast with the set of events that occurred in Hawaiʻi County one year ago, when then-councilwoman Jen Ruggles announced that she “will be refraining from participating in the proposing and enacting of legislation” until county lawyers are able to assure her that she “is not incurring criminal liability under international humanitarian law and U.S. law” as a result of the occupation.

“All of these claims is coming from Hawaiian sovereignty groups,” said Hawaiʻi County Corporation Counsel Joe Kamelamela, following Ruggles’ statement on August 21. “Over the years, they have been filing claims against many county officials and the way that we have been advising all the county officials is that, they’re not a recognized sovereign entity right now. And so, whatever they might say is in violation of international law or some other law that they claim that is still in existence – you know, it’s just invalid.”

Since it is against Hawaiʻi County Council rules to abstain from voting, it was suggested – and Ruggles agreed – to leave the meeting. Her seat sat empty until her term came to an end a few months later.

Before she left office, Ruggles held community meetings – which were attended by Dr. Keanu Sai – and hired private attorney Stephen Laudig. But she never got the response she wanted from Hawaiʻi County lawyers.

At the time, Councilman Aaron Chung said Corporation Counsel Kamelamela “has been put in a very tough spot, almost an untenable situation, because if he doesn’t come up with a written opinion, he’s gonna be blamed for Ms. Ruggles not coming back here. She could have standing to blame him. And I don’t want our corp counsel to be put in that situation. So Joe, I’m gonna give you a suggestion, okay? In as much as Ms. Ruggles has retained the services of her private attorney – whose opinions are contrary to what you had told us verbally, yesterday – I would say don’t put anything in writing. Let her make the move.”

The situation divided the Big Island. Those who concur with Sai’s information hailed Ruggles as a hero, and supported her by testifying at council meetings, demanding the council “cease and desist” legislative activity. Others, including many Puna constituents who were recovering from a recent volcanic disaster, felt she had abandoned her district in their time of need.

One year later, Hawaiʻi County’s neighbor-island to the northwest has opened its doors to discuss the subject matter. Maui County invited Sai to make his presentation to one of its committees.

Tamara Paltin, chairwoman of the Maui County Council’s Planning and Sustainable Land Use Committee, wrote in a recent editorial that “the purpose of the training is to provide the facts and truthful history of this place we all call home to decision-makers and the public at large — and to use this truth as a foundational basis for everyone’s decision-making and to raise our quality of life as residents of Hawaii Nei.”

Sai came to Maui to help the council “address stability and still comply with the law,” he said.

“When I did my doctoral dissertation, it wasn’t just to expose the occupation,” Sai told the council. “It was to provide a solution to remedy, how do you fix this problem.”

On May 15, Sai spoke only briefly about last year’s events in Hawaiʻi County, calling Ruggles a “proud American” who “believes in the rule of law”.

Sai said the International Committee of the National Lawyers Guild has since formed a Hawaiian Kingdom Subcommittee, and that they’re now “engaging this information very, very seriously.”

Sai then provided an update on the “fact finding” effort, which he had hoped would come out of the Permanent Court of Arbitration under a Commission of Inquiry, picking up where the Larsen v. Hawaiian Kingdom tribunal left off in 2001. However, delays at The Hague prompted Sai to change course and form the commission of inquiry through the Council of Regency.

The Regency, as Sai explained, is an entity that serves in the absence of a monarch, established under Artilce 33 of the Hawaiian Constitution of 1864. Sai is the acting Minister of the Interior and Chairman of the Council of Regency.

Sai announced that the Royal Commission of Inquiry has convened with the purpose “to investigate the consequences of the belligerent occupation, including with regard to international law, humanitarian law and human rights, and the allegations of war crimes committed in that context.”

As the head of the Royal Commission, Sai says he is responsible for the implementation of the inquiry, and he told the Council that “I can assure you that this Commission is all European and they are all renowned experts in their areas who have all committed to being a part of this commission of inquiry.”

Sai returned to the Maui Council Committee on June 3, announcing that the Council of Regency had issued a new proclamation on provisional laws, stating:

Now, therefore, we, the acting Council of Regency of the Hawaiian Kingdom, serving in the absence of the monarch and temporarily exercised in the Royal Power of the Kingdom, do hereby acknowledge that acts necessary to peace and good order among the citizenry and residents of the Hawaiian Kingdom, such for example, as act sanctioning and protecting marriage and the domestic relations, governing the course of descents, regulating the conveyance and transfer of property, real and personal, and providing remedies for injuries to person an estate, and other similar acts which would be valid if emanating from a lawful government, must be regarded in general as valid when proceeding from an actual, though unlawful government, but acts in furtherance or in support of rebellion or collaborating against the Hawaiian Kingdom, or intended to defeat the just rights of the citizenry and residents under the laws of the Hawaiian Kingdom, and other acts of like nature, must, in general, be regarded as invalid and void;

According to Sai’s presentation to Maui County, the proclamation also stated:

… from the date of this Proclamation all laws that have emanated from an unlawful legislature since the insurrection began on July 6, 1887 to the present, to include United States legislation, shall be the provisional laws of the Realm subject to ratification by the Legislative Assembly of the Hawaiian Kingdom once assembled, with the express proviso that these provisional laws do not run contrary to the express reason and spirit of the laws of the Hawaiian Kingdom prior to July 6, 1887, the international laws of occupation and international humanitarian law, and if it be the case they shall be regarded as invalid and void;

“One law, particularly, that will be invalid,” Sai mentioned as an example, “the Jones Act. That doesn’t apply here. That’s an American law. Plus, it runs contrary to Hawaiian Kingdom law. It benefits the Merchant Marines of the United States.”

Another Council of Regency proclamation, issued on June 3, brings the state of Hawaii “into a position of being an administration recognizable under international law”, Sai said.

… we do hereby further proclaim that the state of Hawaiʻi, and its Counties, shall preserve the sovereign rights of the ousted government and protect the local population from exploitation of their persons and property, both real and personal, as well as their civil and political rights under Hawaiian Kingdom law.

“Whatever may be said regarding the lawfulness of its origins, the state of Hawaiʻi is now a lawful government,” the Council of Regency proclaimed, mirroring the language of a 2013 Supreme Court decision in State of Hawaiʻi v. Kaulia.

Sai then applied the information to a bill for an ordinance coming out of the Maui County Council Committee, as an example.

“What I would recommend, to make sure that there’s a record so that the Commission of Inquiry knows full well that what the County is doing is in-line with the law of occupation,” Sai said, referring to documents projected onto a screen for all to see, “is to put in a purpose clause. Just a purpose clause, nothing else. Everything else flows normal.”

SECTION 1. In accordance with international humanitarian law, Article 43 of the 1907 Hague Convention number 4 and article 64 the 1949 Geneva Convention, IV, the council is authorized to legislate for the territory of Maui County as a duly recognized administration of the occupying power, the United States of America. This bill for an ordinance is subject to the rights of native tenants and the law of sepulture.

“That’s it. Something simple,” Sai said. “And that is a record, that if somebody looks at it from an international law standpoint, that fits the criteria of legislating.”

Maui County Council vice-chair Keani Rawlins-Fernandez asked their lawyer if there is “any foreseeable ramification for a statement, like this, in our code?”

“There could potentially be,” counsel answered, thinking it over. “I mean, we haven’t sat down to explore what they would be at this point. Right now, the limit of what I’m going to advise you in stops at the Constitution of the United States, the Constitution the State of Hawaiʻi, so that would be the boundary.”

The statement drew assorted chuckles from those in the chamber.