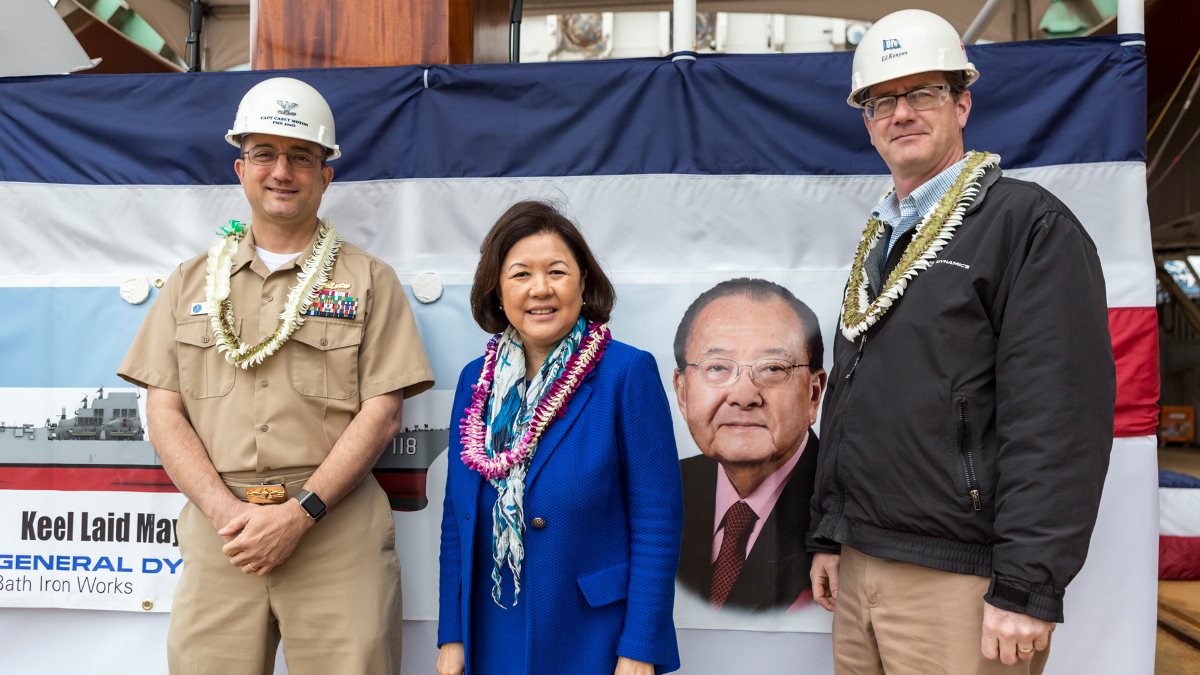 BATH, Maine - The late U.S. Senator from Hawaiʻi will have his name on the 68th Arleigh Burke-class destroyer, which is one of 21 ships currently under contract for the DDG 51 program.

(BIVN) – The name of the late U.S. Senator Daniel K. Inouye, already adorning many Hawaiʻi institutions, will next be given to the Navy’s newest Arleigh Burke-class guided missile destroyer, which will be christened this weekend in Maine.

From the U.S. Department of Defense:

The future USS Daniel Inouye is named in honor of Daniel Inouye, who served as a United States Senator for Hawaii from 1963 until his death in 2012. He received the Medal of Honor June 21, 2000 for his extraordinary heroism in action while serving with the 442nd Infantry Regiment Combat Team in Italy during World War II. During an assault on April 21, 1945, an exploding grenade shattered his right arm; despite the intense pain, he refused evacuation. He remained at the head of his platoon until they broke the enemy resistance and his men deployed in defensive positions, continuing to fight until the regiment’s position was secured.

U.S. Sen. Mazie Hirono of Hawaii will deliver the christening ceremony’s principal address. Irene Hirano Inouye, wife of the late Senator, will serve as the ship’s sponsor. In a time-honored Navy tradition, Mrs. Inouye will christen the ship by breaking a bottle of sparkling wine across the bow.

“The future USS Daniel Inouye will serve for decades as a reminder of Senator Inouye’s service to our nation and his unwavering support of a strong Navy and Marine Corps team,” said Secretary of the Navy Richard V. Spencer. “This ship honors not only his service but the service of our shipbuilders who help make ours the greatest Navy and Marine Corps team in the world.”

The future USS Daniel Inouye will be the 68th Arleigh Burke-class destroyer, and is one of 21 ships currently under contract for the DDG 51 program. The ship is configured as a Flight IIA destroyer, which enables power projection and delivers quick reaction time, high firepower, and increased electronic countermeasures capability for anti-air warfare. The Daniel Inouye will be 509.5 feet long and 59 feet wide, with a displacement of 9,496 tons. She will be homeported in Pearl Harbor.