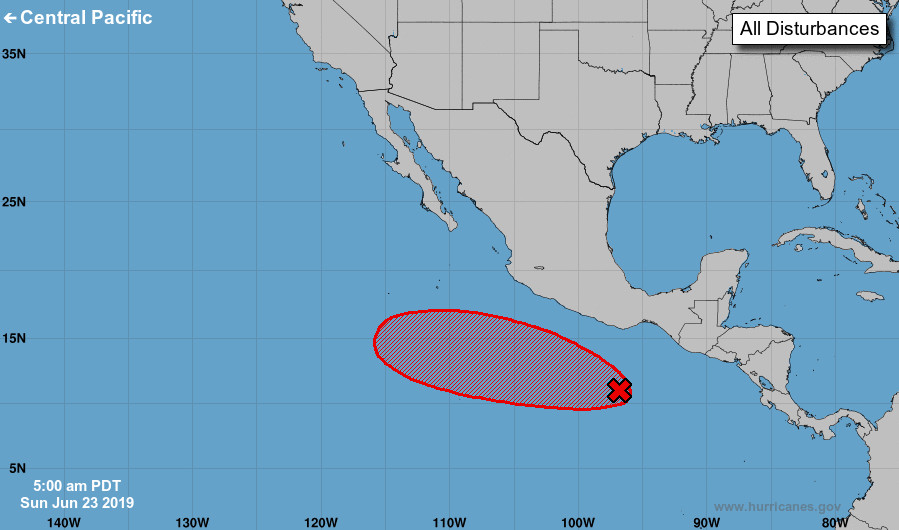 image shows the five-day tropical weather outlook, courtesy the National Hurricane Center. Red area shows the location of a distubance with a chance of cyclone formation in 5 days.

After Quiet Hurricane Season Start, Pacific Could Get First Storm

EASTERN PACIFIC - There has not been a named storm since the 2019 hurricane season officially began on May 15 in the East Pacific Ocean (or June 1 in the Central Pacific).

(BIVN) – It has been more or less a month since the official start of the 2019 hurricane season in the Pacific Ocean, and so far it has been quiet.

The could change this week, as a disturbance off Mexico could develop in the next week into the first tropical cyclone of the season.

Hurricane season officially began on May 15 in the Eastern Pacific, and on June 1 in the Central Pacific, where Hawaiʻi is located.

According to the NOAA National Weather Service National Hurricane Center in Miami:

Disorganized showers and thunderstorms located a few hundred miles southwest of the Gulf of Tehuantepec are associated with a tropical wave. Environmental conditions appear conducive for gradual development of this system during the next several days, and a tropical depression is likely to form by the middle of the week while the system moves west-northwestward away from the coast of Mexico.

At the time, NOAA also reported that a weak El Niño matured in early 2019. The effects of El Niño tend to result in a greater tropical cyclone threat to Hawaiʻi.

The El Niño Advisory remains in effect, according to the latest El Niño / Southern Oscillation (ENSO) diagnostic discussion issued on June 13. “El Niño is predicted to persist through the Northern Hemisphere summer 2019 (66% chance), with lower odds of continuing through the fall and winter (50-55% chance),” the synopsis said.