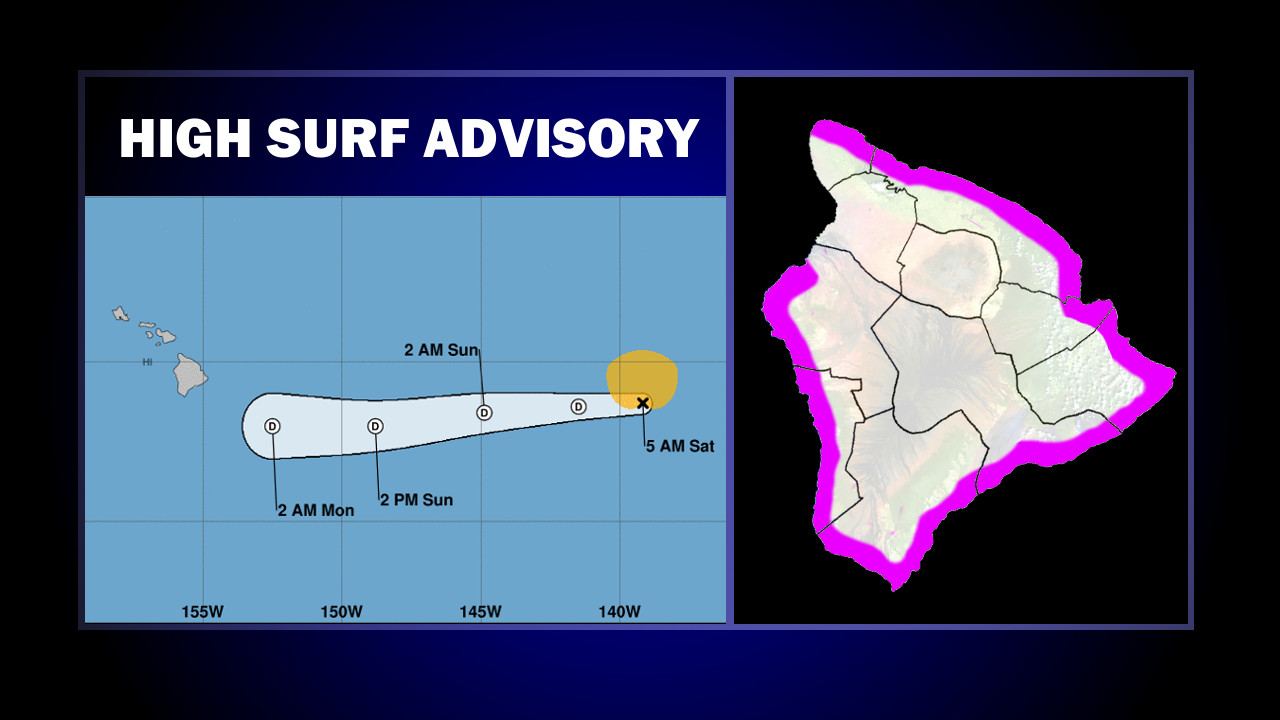 HAWAIʻI ISLAND - Forecasters say the once powerful Hurricane Barbara is now a post-tropical cyclone, but will still bring an associated pool of deep moisture over Hawaiʻi.

(BIVN) – A High Surf Advisory has been posted until 6 a.m. HST Monday for east facing shores of Hawaiʻi Island, as Post-Tropical Cyclone Barbara makes its approach from the west.

“The combination of cold sea surface temperatures and strong westerly shear has taken a toll on Barbara. The system has degenerated significantly, and it now consists of a vigorous swirl of low clouds devoid of any deep convection. Consequently, it no longer classifies as a tropical cyclone,” the National Hurricane Center said in its final advisory on the storm, posted at 5 a.m. HST. “Additional weakening is indicated, and the system should dissipate in a couple of days while it moves toward the west steered by the low-level trade winds.”

Barbara is 1,040 miles east of Hilo, and moving west at 17 mph. The large, east swell generated by the storm will increase surf along east facing shores of the Big Island to 6 to 10 feet this morning, then building to 8 to 12 feet tonight and Sunday, forecasters say. “We do not currently anticipate surf will reach the High Surf Warning threshold along east facing shores during this event,” the National Weather Service in Honolulu wrote this morning. “However, we will continue to monitor observations in case the surf might be larger than the guidance indicates, especially later this weekend or early next week.”

According to the National Weather Service, forecast models have been consistent in bringing the associated pool of deep moisture over the area from the east. Forecasters wrote:

This is expected to fuel increased rainfall coverage and intensity from E to W – from Sunday night into Tuesday. Models indicate that the remnant surface trough will pass near of just S of the Big Island on Monday, then move W of the islands Monday night into Tuesday. Based on this track, breezy to windy NE to SE winds appear likely Sunday night through Monday night, to the point that a Wind Advisory may become warranted for parts of the state, especially the Big Island. Additionally, a Flash Flood Watch may be required for parts of the island chain, but confidence and timing didn’t warrant an issuance this morning.

Overall, with an easterly component to the wind prevailing as the Barbara remnant passes, we should see wet conditions over windward areas, with showers spreading to leeward areas more regularly. Some of the rainfall could be heavy, particularly over the Big Island and windward terrain of the remaining islands. Latest guidance indicates moisture extending as high as about 20 thousand feet, which is sufficient for the development of locally heavy showers, but shallow enough to preclude widespread thunderstorm development. However, a slight chance of thunderstorms has been added to the Big Island forecast for Monday due to terrain enhancement.