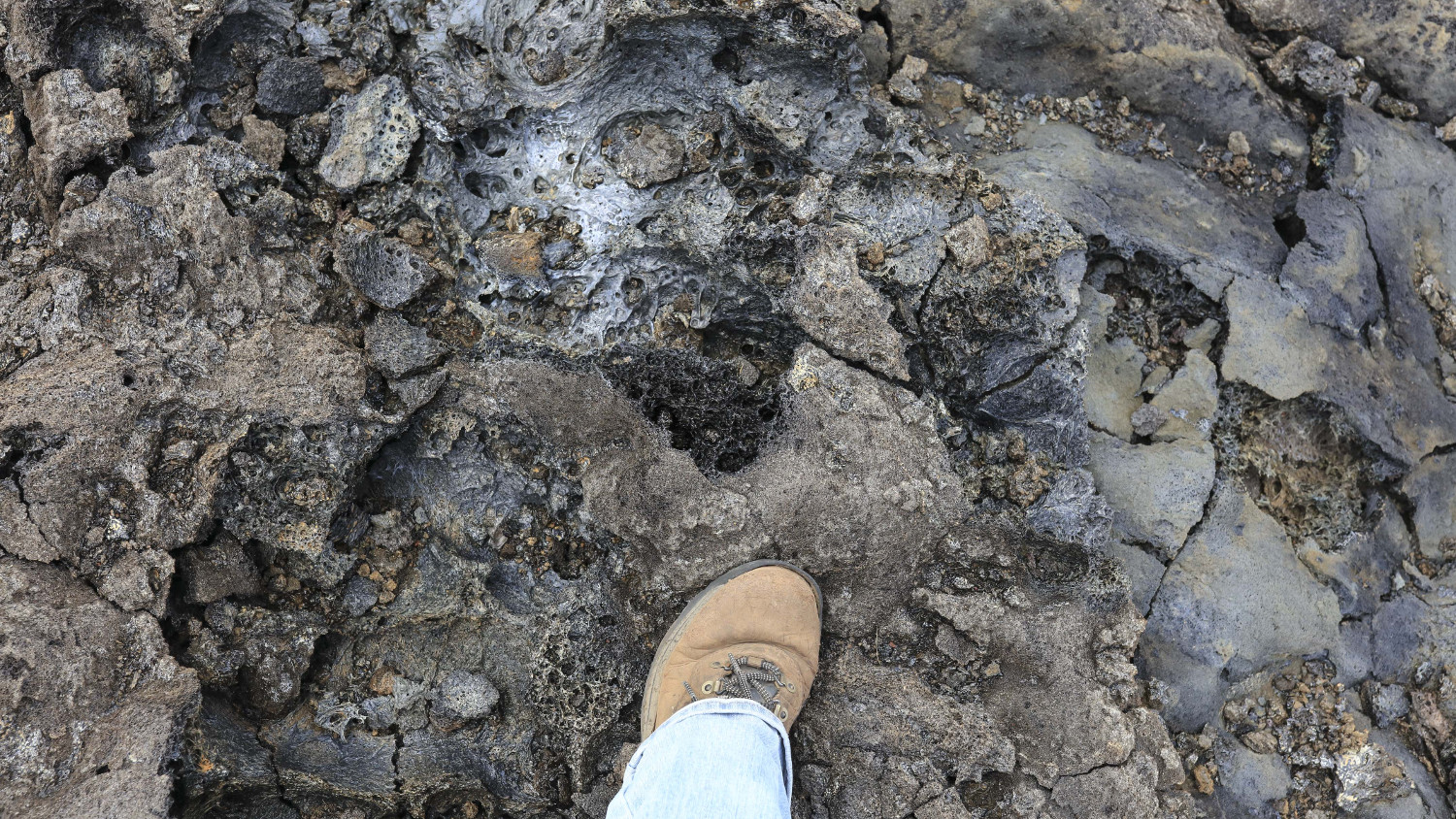 A geologist approaches "the frothy top of lava" near the fissure 8 vent on Kīlauea Volcano's lower East Rift Zone during field observations in June. USGS image by C. Parcheta.

HAWAIʻI ISLAND - Scientists say the south flank of Kīlauea continues to creep seaward at elevated rates following the Magnitude 6.9 earthquake near Kalapana on May 4, 2018.

(BIVN) – Kīlauea is not erupting and the Volcano Alert Level remains NORMAL/GREEN.

The weekly Kilauea activity summary provided by the USGS Hawaiian Volcano Observatory reads similar to other recent updates. Monitors show steady rates of seismicity and ground deformation, low rates of sulfur dioxide emission, and only minor geologic changes since the end of eruptive activity in September 2018, the scientists say.

However, there is one new statement in the update. ” In addition to motion along the East Rift Zone, the south flank of Kīlauea continues to creep seaward at elevated rates following the May 4, 2018 M6.9 earthquake near Kalapana.”

USGS HVO Scientist-In-Charge Tina Neal mentioned the seaward creep in an interview with Sherry Bracken last week, but this was the first time the statement appeared in the weekly update.

According to Asta Miklius, a geophysicist at the observatory who works with ground deformation, the south flank of Kïlauea has indeed been moving faster since the eruptive events of late April last year.

Miklius said it is common to see elevated rates of motion on faults after a large earthquake, “however, post-seismic motions slow over time, and we have not yet observed the south flank motion slowing down.”

“The East Rift Zone underwent spectacular changes last year, collapsing in places and extending at enormous rates in others as magma moved down the rift,” Miklius wrote. “These changes must also have affected the motion of the south flank, and we will have to see how it evolves.”

Miklius said the observations are not a cause for alarm. “There is currently no indication of greater risk of imminent hazard associated with the faster south flank motion,” Miklius said.

Since early March, GPS stations and tiltmeters at the Kīlauea summit have recorded deformation consistent with slow magma accumulation within the shallow portion of the Kīlauea summit magma system (1-2 km or approximately 1 mile below ground level). However, gas measurements have yet to indicate significant shallowing of magma. HVO continues to carefully monitor all data streams at the Kīlauea summit for important changes.

Further east, GPS stations and tiltmeters continue to show motions consistent with slowed refilling of the deep East Rift Zone magmatic reservoir in the broad region between Puʻu ʻŌʻō and Highway 130 over recent weeks. While the significance of this pattern is unclear, monitoring data do not suggest any imminent change in volcanic hazard for this area.

HVO continues to carefully monitor all data streams along the Kīlauea East Rift Zone and south flank for important changes, the update said.