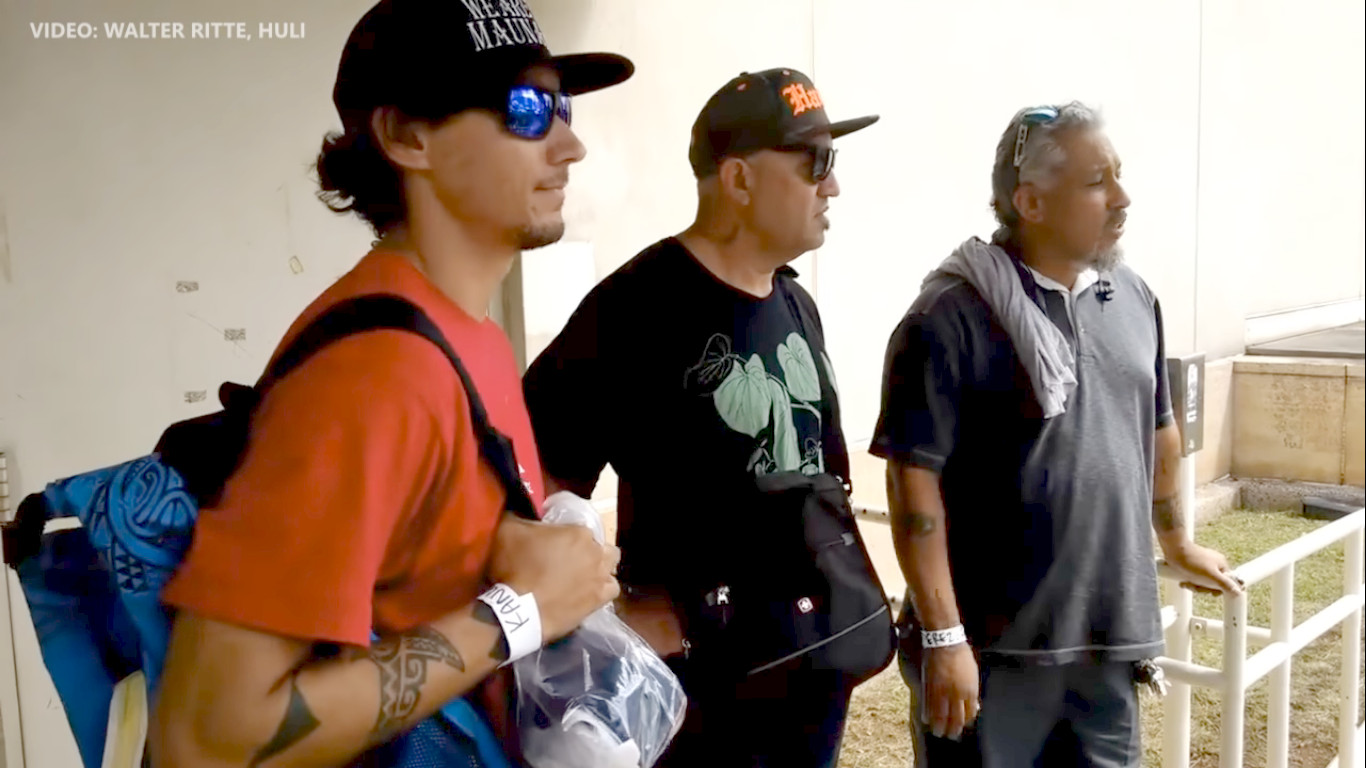 HULI Statement: “We Will Stand In Kapu Aloha”

HAWAIʻI ISLAND - HULI, one of the groups active in the Ku Kiaʻi Mauna movement, says "we will forever fight the TMT, until the last aloha ʻāina."

(BIVN) – If there was any question about how Thirty Meter Telescope opponents would respond to the news that TMT construction will begin on July 15, a media release issued Wednesday night by HULI – one of the groups leading the resistance to the project planned for Mauna Kea – has the answer.

“Kanaka Maoli have no other choice but to engage in peaceful and nonviolent direct action,” the media release states. “We will forever fight the TMT, until the last aloha ʻāina.”

HULI formed in May 2017, and is “committed to providing non-violent direct action training and assistance in Hawaiʻi as well as Action Art assistance.” Listed on the media release are Kahoʻokahi Kanuha and Andre Perez, who have been active on the issue of Mauna Kea, as well as Haleakalā.

“Truth and history are on our side, and our commitment and mana is only rising,” the HULI statement reads. “We are prepared for intense and lengthy struggles but stand firm in Kapu Aloha – peace and nonviolence.”

“We ask everyone to honor this kuleana and to conduct ourselves in PONO,” the release stated. The full statement can be found below.

The state is preparing for resistance. In 2015, the conflict over the telescope snarled traffic on the mountain and resulted in numerous arrests. This time around, officials are changing their approach. They have already announced that Mauna Kea Access Road will be closed starting on Monday, “to ensure the safe transport of heavy machinery.” DLNR Chair Suzanne Case has ordered the temporary closure of hunting units A, K, and G in the Mauna Kea Forest Reserve and Natural Area Reserve to hunting activity starting on the same day.

The Hawaiʻi National Guard will also be providing some assistance. “We are providing National Guard support to the activities,” Governor David Ige confirmed during a news conference yesterday. “They have a very specific support role. They’ll be providing transportation of personnel and supplies as requested. They also have been asked to support road closures and other activity that may be necessary.”

As far as the possible influx of people who live off-island who may come to stand against the telescope project, Governor Ige told the media that “we are preparing for a lot of different scenarios.”

“It’s uncertain about the involvement of those out-of-state because they certainly may have different values or experiences,” the governor said.

Here is the full media release issued by HULI:

Today David Ige reaffirmed the State of Hawaiʻi’s commitment to ensure the construction of the Thirty Meter Telescope on Maunakea beginning Monday, July 15, 2019. Ige also reaffirmed the State’s commitment to protect the interests of foreign, private corporations rather than the rights of the people of Hawaiʻi through a long, coordinated and organized mass mobilization of Hawaʻi law enforcement at the expense of Hawaiʻi tax-payers.

ʻAkolu, we reaffirm that Maunakea is sacred to Kanaka Maoli. The summit of Maunakea is kapu as the highest point in the Pacific. Therefore, like all humanity, we have sacred places that should be recognized and protected.

ʻAlima, Kanaka Maoli will continue to assert and increase stewardship of Mauna Kea. We affirm our rights as hoaʻāina to access and manage our national lands, to practice our religion and culture and to protect these lands from further destruction and desecration.

Therefore, while the TMT Corporation and the State of Hawaiʻi continue to ignore our massive opposition and existence as a living people, Kanaka Maoli have no other choice but to engage in peaceful and nonviolent direct action.

We will forever fight the TMT, until the last aloha ʻāina. Truth and history are on our side, and our commitment and mana is only rising. We are prepared for intense and lengthy struggles but stand firm in Kapu Aloha – peace and nonviolence. We ask everyone to honor this kuleana and to conduct ourselves in PONO.