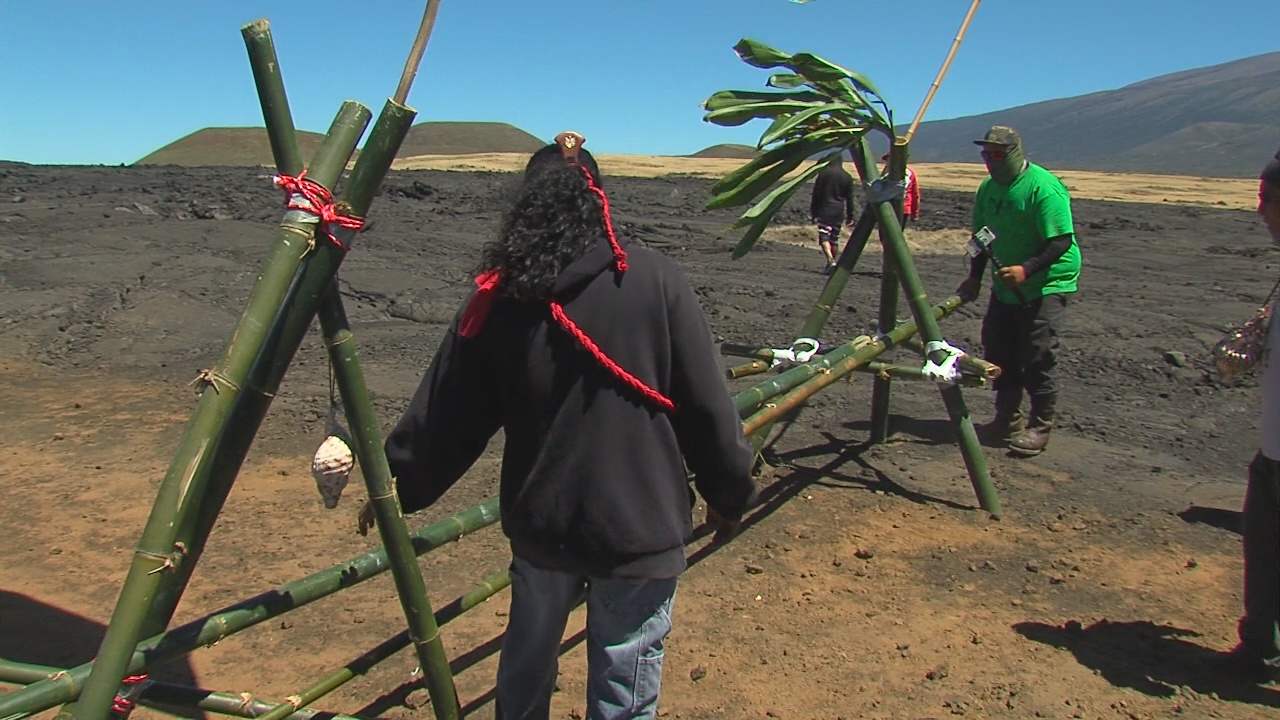 file image of the bamboo gate next to Mauna Kea Access Road from July 16, 2019

MAUNA KEA, Hawaiʻi - A car containing technicians from Gemini Observatory did not make it to the Mauna Kea summit on Tuesday. Several statements were issued.

(BIVN) – The cooling system for the Gemini Observatory on Mauna Kea has become unstable, but specialized technicians were unable to make it to the summit on Tuesday to it shut down “in order to prevent damage to the instruments and the cooling circuit itself,” the Maunakea Observatories says.

It has been one week since the observatories on Mauna Kea shut down for safety reasons amidst the ongoing the standoff over the planned Thirty Meter Telescope continues.

The protesters prevented existing observatory technicians from passing through their checkpoint at about 8 a.m. today. This was contrary to an earlier agreement between law enforcement and the protesters that astronomy technicians would be allowed passage. The crew ultimately returned to Hilo. Itʻs important to note that blocking vehicular and pedestrian traffic is illegal.

The Maunakea Observatories went into greater detail in this news release issued on Tuesday:

At approximately 7:45 a.m. on Tuesday, July 23, a car containing technicians from Gemini Observatory was stopped by activists from entering the Maunakea Access Road. The observatory had been assured access the previous day in conversation with law enforcement and the Office of Maunakea Management. Despite prior public statements indicating observatory technicians would not be denied access to the telescopes, activists today contradicted their earlier position. Activists told observatory personnel that without a formal, public letter from the observatories — supporting activists’ demands of the state — access for critical technical maintenance is no longer supported.

Upon approach, the car of technicians was initially waived through the bamboo gate; the driver stopped to speak with an official from the Office of Maunakea Management, at which point a kupuna approached the car, stating that access was not to be allowed. Five additional activists then moved to stand in front of the car. This denial of access was contrary to the understanding of access approval by the Gemini crew members and the individual who had initially opened the gate.

The car of technicians respectfully pulled to the side of the road at the request of the activists and waited for approximately 45 minutes. During that time, activist leaders indicated that they were working to determine whether the technicians should be allowed access.

Eventually, the Gemini crew members elected to turn back, given the uncertainty of access. The crew was flagged down on their way away from the access point with an appeal from activists to continue to wait. The crew stopped to speak with the activists briefly before continuing to the Gemini base facility in Hilo.

The Maunakea Observatories continue to support the efforts of state and county law enforcement to restore safe and reliable access to the access road.

The Maunakea Observatories news release noted: “The observatory personnel planned to shut off the compressors, move one instrument at risk to a separate cooling circuit, shut down the second, disconnect specific joints in the cooling system, and perform a standard facility inspection that is usually conducted on a daily basis during normal operations. The planned technical work would have taken approximately three hours; the crew would have then come directly back to their Hilo base facility.”

During a news conference on the Mauna Kea Access Road, one of the TMT opposition leaders, Kahoʻokahi Kanuha, stated:

Gemini arrived. We expressed to them the situation. We told them that we want to work together and assured them that they can make it up the mountain today, as quickly as possible. They pulled to the side. They sat there for all 15 minutes and without any communication to us they turned around and drove away.

When I saw that, I ran to them. And I was huffing and puffing when I got there. And I expressed to them that we want to work together. We want to find a solution to this. And all we’re asking is that you guys work with us, as well. Right? Express the fact that that you feel that we should have access to the Mauna, that you do not support kanaka being locked out from our sacred places. It’s a simple request, right?

And we asked them… to also express that they wouldn’t support the use of excessive force and the National Guard on peaceful protectors – again, not protesters, but protectors.