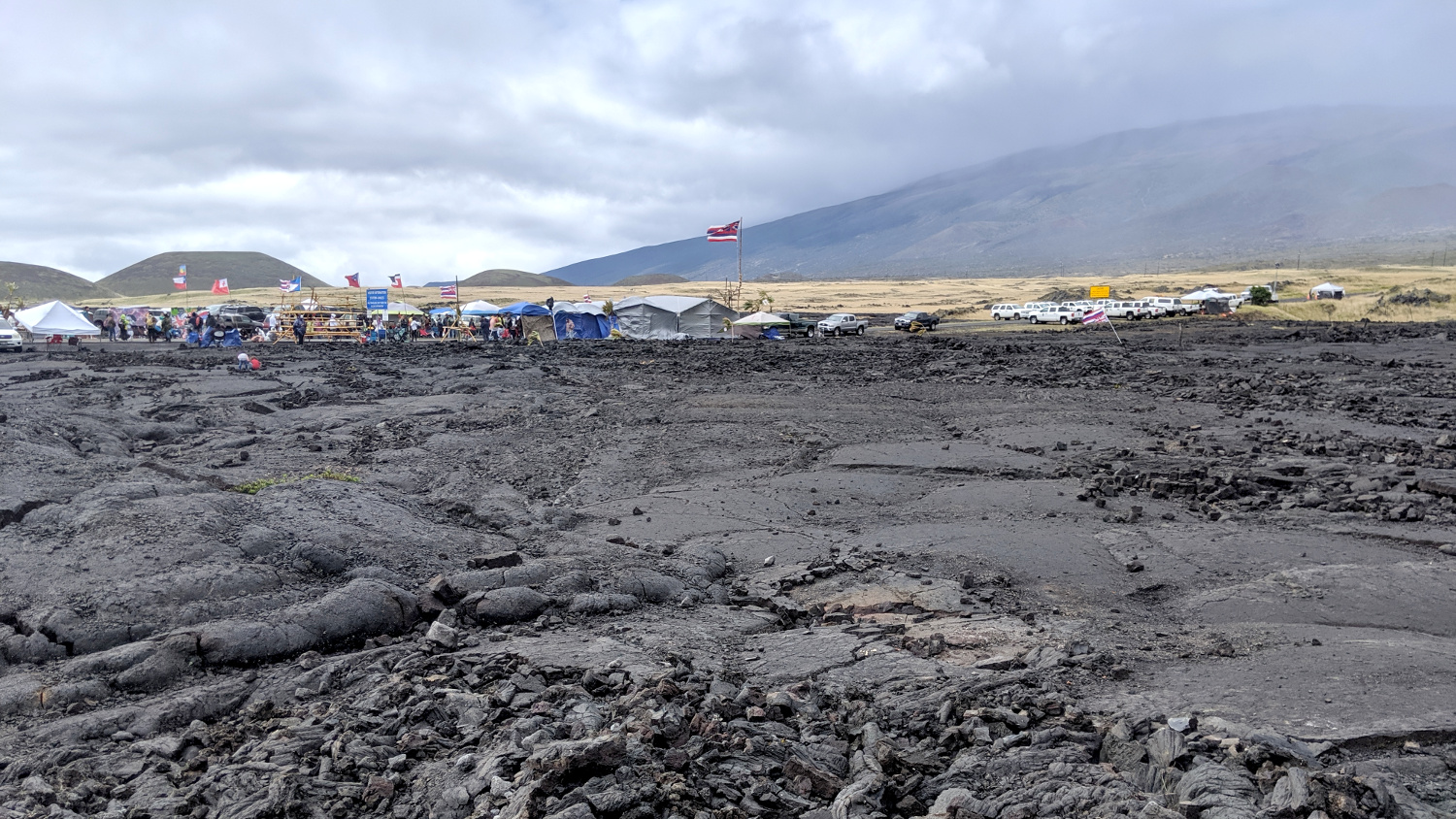 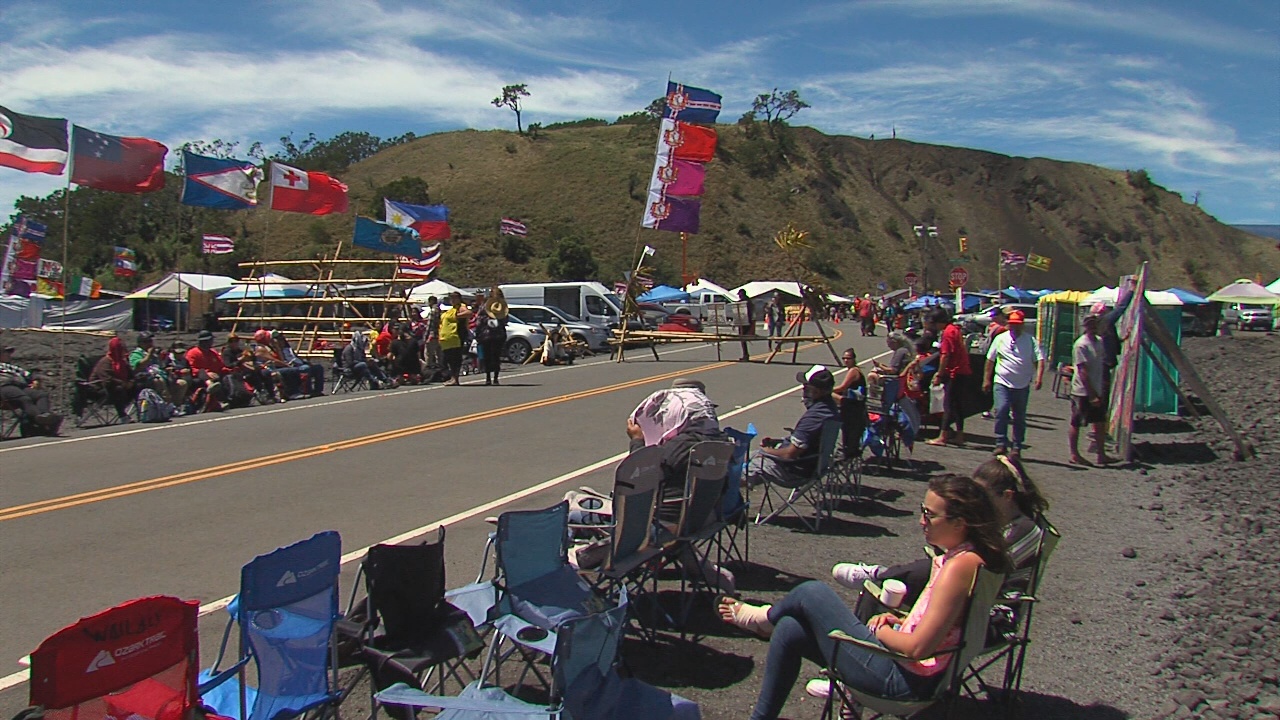 (BIVN) – Jurisdiction over the Mauna Kea Access Road – which is currently ground zero in the conflict over the Thirty Meter Telescope planned for Mauna Kea – has become heavily debated in recent weeks.

The discussion came to a head during an August 14 informational briefing before the State Senate Committee on Hawaiian Affairs, when Hilo Senator Kai Kahele pressed Hawaiian Homes Commission chair William Aila for an explanation as to who legally owns the road.

The state says the Mauna Kea Access Road – the only safe route to the summit from the cross-island Saddle Road, or Daniel K. Inouye Highway – is under Hawaiʻi Department of Transportation jurisdiction. But Kahele questions that.

“We have to step back and make a distinction between the road as an improvement and or a piece of infrastructure, sort of like a power line or a water line, and the actual fee to the road,” said deputy attorney general Ryan Kanakaʻole. “The Department of Hawaiian Homelands owns the fee to the road.”

The Hawaiʻi DOT closed the Mauna Kea Access Road on July 15 in order to facilitate the movement of heavy machinery up the mountain to begin construction on the TMT observatory. But crews have made no progress in their ascent because TMT opponents have controlled the base of the road from the first day. Over 38 people, mostly kūpuna, were arrested for blocking the road but law enforcement has been unable to clear a path for the construction vehicles.

Meanwhile, many Hawaiians say they have the right to be on the road as beneficiaries of the Hawaiian Homes Commission Act. That’s where the Aug. 14 State Senate committee discussion comes into play.

At the root of the dispute is ACT 14, enacted in 1995, which provided a $600 million cash settlement to resolve claims over the state’s illegal use of certain Hawaiian Home lands – which included a portion of the Mauna Kea Access Road. However, the ACT also specifically called for “the initiation of a land exchange to ready uncompensated use of Hawaiian Home Lands for State roads, claims and highways”.

“What I’m being advised is Act 14, as it was passed by the state legislature, concluded the negotiations,” Aila said during the senate briefing. “You have the same attorneys that we have. I’m getting advice from them that this is completed. I just have to finish the negotiations.”

On July 9th 1921 the Hawaiian Homes Commission Act (HHCA) was passed by the U.S. Congress setting aside approximately 200,000 acres of land in the Territory of Hawaiʻi as a land trust for homesteading by Native Hawaiians as identified in the act as having a minimum of 50% or more of native Hawaiian blood quantum.

Between 1921 and the late 1970ʻs thousands of acres of the original land trust were illegally taken, withdrawn and transferred via executive authority by the Territory of Hawaiʻi, United States Military (during WWII) and the State of Hawaiʻi in breach & clear violation of the HHCA.

On August 15th 1983 a Federal-State Task Force on the Hawaiian Homes Commission Act submitted a report to the United States Secretary of the Interior and the Governor of the State of Hawaiʻi on recommendations to correct many of the past grievances and direct the Federal Government to settle land claims and the State of Hawaiʻi to improve its performance as a trustee. The Chair of the Task Force was Ann Nathaniel. This report would be the basis for the 1996 Hawaiian Home Lands and Recovery Act championed by U.S Senator Daniel K. Akaka when Federal Lands (Barbers Point Naval Air Station / Kalaeloa) were returned to the land trust.

In 1991, Governor Waiheʻe convened a “Task Force on the Department of Hawaiian Home Lands Land Title and Related Claims” to investigate and resolve DHHLʻs illegal land use claims against the State. The results of the task force became the basis for ACT 14 in 1995.

On November 4 1994 the Hawaiian Homes Commission discussed “Proposals to Resolve DHHL Land Title and Related Claims” (Roads and Highways Proposal) and identifies the Mauna Kea Observatory Road (65.142 acres) as one of the many unsettled land claims throughout the State.

In 1995 the State Legislature convenes a special session and introduces HB 10-S which would become ACT 14. It would establish a $600M cash settlement and included a settlement for all roads and highways that were in breach of the trust. The ACT specifically called for “the initiation of a land exchange to ready uncompensated use of Hawaiian Home Lands for State roads, claims and highways”.

In 1997, their is a dispute between the Department of Hawaiian Home Lands and the Department of Transportation on whether or not a $5M payment resulting from the auctioning of the Marks estate property would be used in exchange for title to Hawaiian Home Lands used for State roads and highways. The States Attorney General Margery Bronster opined that no formal agreement took place and that the DOT was not obligated to transfer $5M to the DHHL.

On March 15th 2018 the Department of Transportation designates the Mauna Kea Observatory Road as a State Highway Route and identifies it as being 6.27 miles in length starting from the intersection of the Daniel K. Inouye Highway to 125 feet past the Hale Pōhaku Visitor Information Center Entrance.

On January 28-29 2019 the DHHL receives an update on the Act 14 Land Claim Settlement. In that report, under the “Roads and Highways Settlement” the DHHL reports that “To date, no lands have been conveyed to DHHL to satisfy the Stateʻs commitment to compensate the trust for its uses of Hawaiian Home Lands as state highways on various islands” totaling a claimed amount of 346.203 acres. The total outstanding land claim is 1,328.745 acres. This includes the Maunakea access road.

On August 14th 2019 in a State Senate Hawaiian Affairs Committee hearing Interim DHHL Chair William Aila acknowledges that “There is no evidence of any land exchange” in regards to the Mauna Kea access road as required by ACT 14.

In a summary, Kahele wrote that “in order for the State of Hawaiʻi to claim title and jurisdiction over the Mauna Kea access road it must at a minimum”:

“As a result of Wednesdayʻs hearing, Senator Kurt Favella (Ewa Beach) and myself will be sending letters to the State Attorney General and the U.S. Secretary of the Interior to determine who holds title & jurisdiction to the Maunakea access road,” Kahele wrote. “I believe the Maunakea Access Road is still included in the DHHL land inventory because the State of Hawaiʻi is in breach of ACT 14 and as a result the Maunakea access road belongs to the beneficiaries of the Hawaiian Homes Commission Act of 1920.”