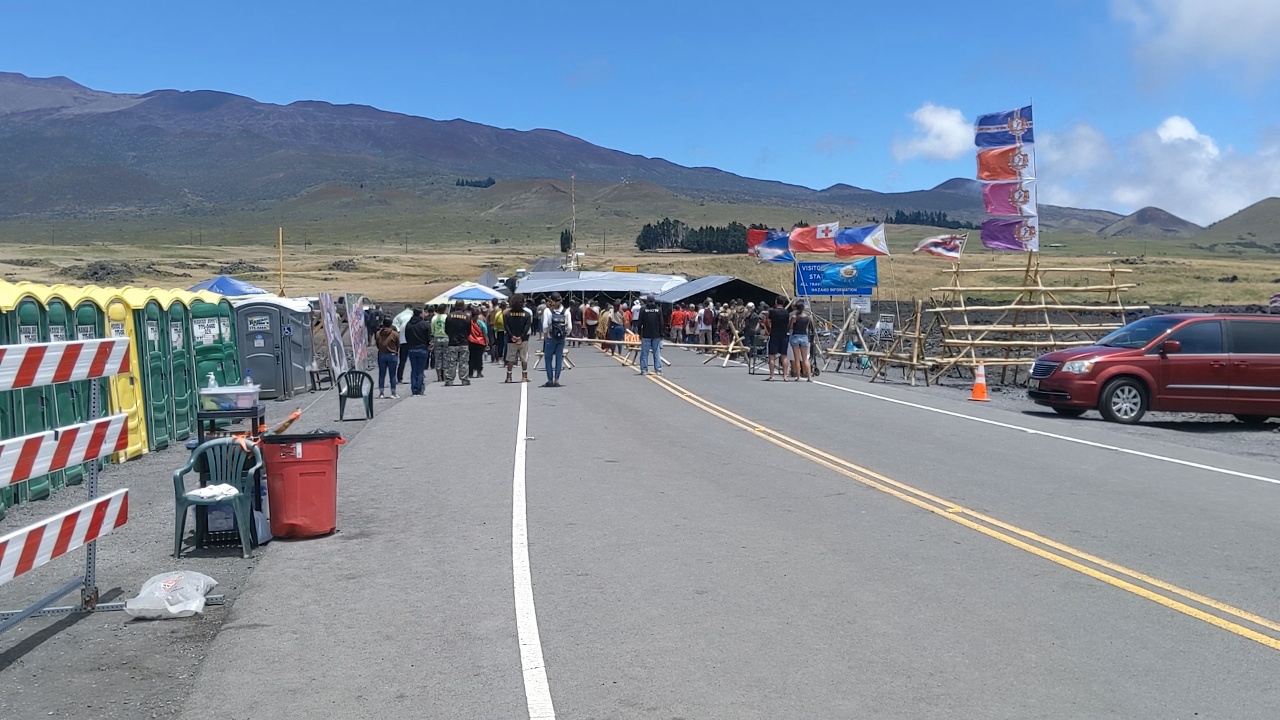 MAUNA KEA, Hawaiʻi - The Department of Transportation is in charge of the access road, various Hawaiʻi agencies say, after ownership was questioned by Senate lawmakers.

(BIVN) – After saying little for over a month, the various state agencies that make up the “Mauna Kea Media” team on Friday issued a joint statement concerning  jurisdiction over the Mauna Kea Access Road, the pivotal summit pathway central to the standoff over the Thirty Meter Telescope.

After the question “who owns the Mauna Kea Access Road” was briefly debated during an August 14th State Senate Hawaiian Affairs Committee meeting, the state – 16 days later – furnished this official statement from the Department of the Attorney General (AG), the Department of Hawaiian Home Lands (DHHL), and the Department of Transportation:

“State DOT has controlled and maintained Mauna Kea Access Road since it became part of our highways system in 2018,” said DOT Deputy Director Ed Sniffen. “Prior to that time, sections of the road situated on Hawaiian home lands were maintained by the County of Hawai‘i pursuant to a Memorandum of Agreement (MOA) between DHHL and the County of Hawai‘i.”

Beneficiaries of the Hawaiian Homes Commission Act of 1920 do not own Mauna Kea Access Road. Act 14 (1995) resolved all claims concerning the use of Hawaiian home lands for public roads and highways built before and after statehood.

In response to concerns that some compensation remains outstanding, DHHL and the Department of Land and Natural Resources (DLNR) have been working together to evaluate the terms of compensation and to confirm that it has been made in full. This process, however, does not alter the fact that all claims regarding use of roads and highways crossing DHHL lands have been resolved.

“Act 14 was a historic piece of legislation,” said Hawaiian Homes Commission Chair William J. Aila Jr. “It resolved long-standing claims associated with the use of Hawaiian home lands. We remain committed to seeing the completion of the few remaining items under Act 14, including ensuring that compensation for the use of roads and highways crossing DHHL lands has been received in full.”

“The State is reviewing the compensation issues related to the use of Hawaiian home lands for public roads and highways, and will ensure they have been addressed,” stated Attorney General Clare E. Connors. “The public is reminded that Mauna Kea Access Road is a public road controlled by DOT and that the current blockade is unlawful.”

At this time, DOT has restricted access on Mauna Kea Access Road to preserve public health and safety, and to carry out its responsibilities under HRS Ch. 264.

“I believe the Mauna Kea Access Road is part of the Hawaiian Homes land trust, and still remains as part of the land trust, and any [Memorandum Of Understanding], any transfer, we should look into,” Kahele said. He added in a later social media post that “in order for the State of Hawaiʻi to claim title and jurisdiction over the Mauna Kea access road it must at a minimum”:

Kahele said he planned to send letters to both the State Attorney General and the U.S. Secretary of the Interior to determine who holds jurisdiction to the road.

The Hawaii Department of Transportation (HDOT) reminds the public that road shoulders are primarily designed to provide for emergency storage of disabled vehicles, not to accommodate long term parking. HDOT does not permit long-term parking along any of its high-speed facilities. The only other roads in the State of Hawaii with the same speed limit as DKI Highway are the H-1 Freeway between Kapolei and Kunia and the H-3 Freeway between Halawa and the Harano Tunnels.

In its continued effort to ensure safety and security measures are in place at the intersection of Daniel K. Inouye Highway (formerly Saddle Road) and the Mauna Kea Access Road, HDOT installed temporary traffic signals and barriers at the intersection in late July. These installations were followed by the installation of 80 “No parking, stopping, standing, loading and unloading” signs to ensure the safety of the traveling public and deter unpermitted parking and unexpected roadway departures and entries along the highway.

Parking is available in areas outside of HDOT jurisdiction and away from the highway. Information regarding the applicable statue can be found at the following link.

The state also warned that “those interfering with the installed safety features may be subject to criminal property damage charges in accordance with” this law.

The Mauna Kea Media team has issued few, if any, joint news releases about the Mauna Kea situation since Governor David Ige asked Hawaiʻi County Mayor Harry Kim to “attempt to reach common ground” with the opposition to the Thirty Meter Telescope back on July 23, 2019.