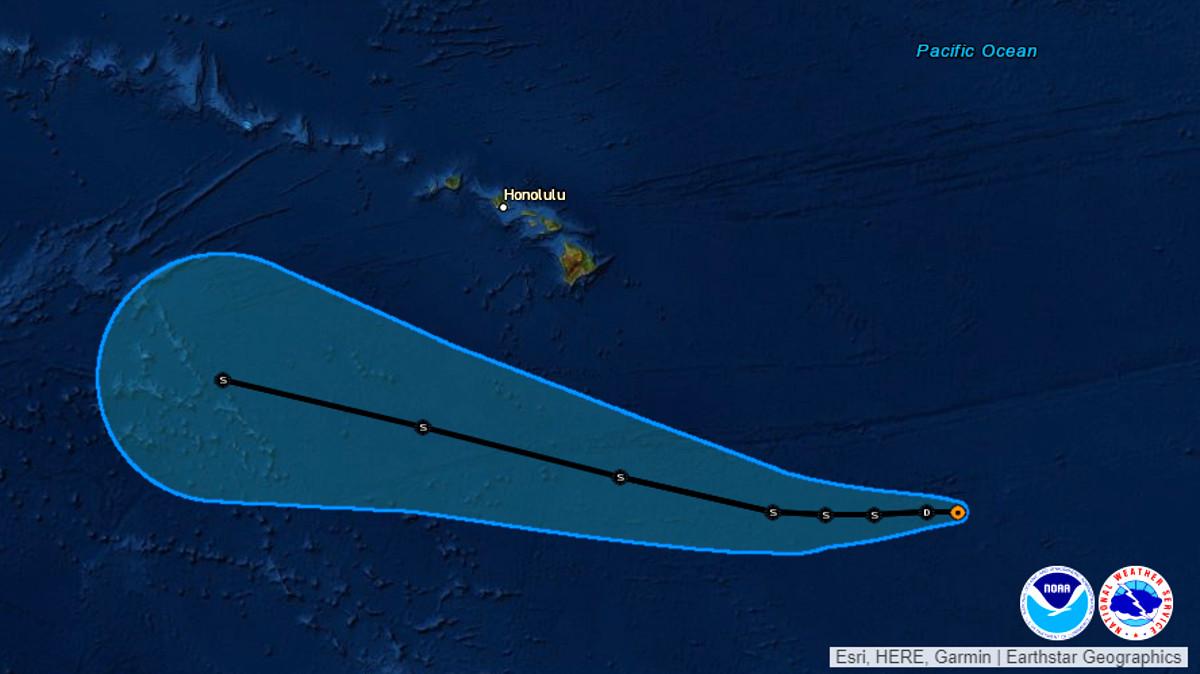 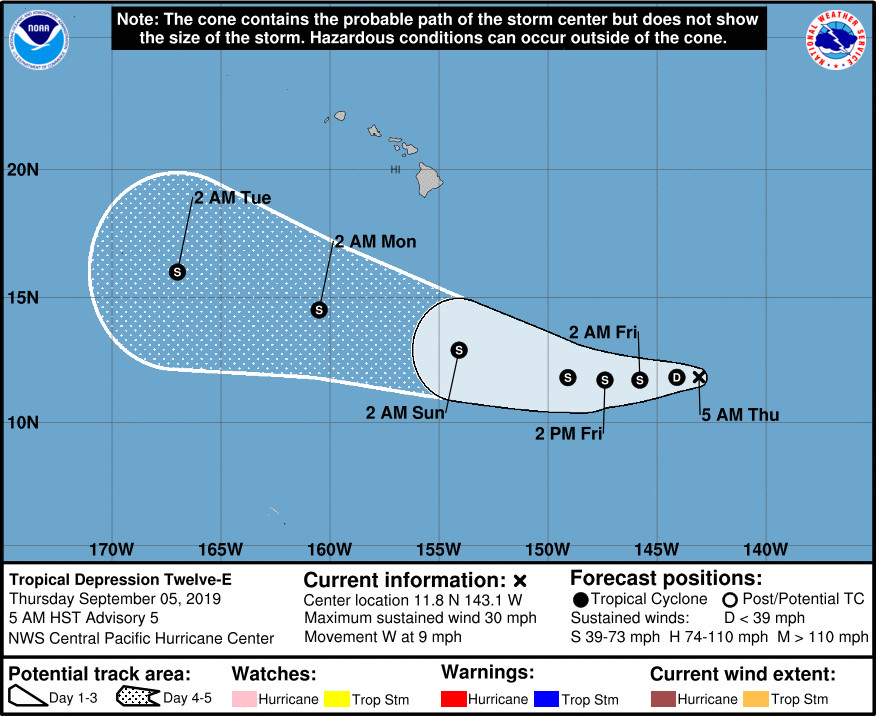 Twelve-E was 965 miles east southeast of Hilo as of 5 a.m. Thursday morning. The depression is moving toward the west near 9 mph (15 km/h), and may strengthen into a tropical storm on Friday.

On the forecast track, the storm looks like it will pass Hawaiʻi Island far to the south.

In its 5 a.m. discussion, the Central Pacific Hurricane Center in Honolulu wrote:

Although showers and thunderstorms have increased in coverage near the depression overnight, they haven’t been persistent over the estimated position of the low-level circulation center (LLCC). Additionally, the lack of banding features indicates that the system remains poorly organized. Subjective Dvorak intensity estimates from PHFO/PGTW/SAB are 1.5/25 kt, and are widely separated in their position estimates. The entirety of these data support maintaining the initial intensity at 25 kt for this advisory.

The initial motion estimate of 260/8 kt is based on a blend of extrapolation and satellite position estimates, with the LLCC estimated to be on the north side of the deep convection. Little overall change to the track forecast philosophy means that the updated official forecast is very close to the previous, with the system generally moving west, then west-northwest. The short term steering mechanism will be a relatively weak low-level ridge to the north, thereby keeping forward motion on the slower side. A significant increase in forward speed is expected after 60 hours or so as a deep-layer ridge strengthens far north of the main Hawaiian Islands. This feature will keep the system on a westward track well south of Hawaii, with even the northernmost GFS supporting this notion. The official forecast lies near the middle of the most reliable guidance, and is based a blend of the HCCA consensus and ECMWF.

Assuming the depression is able to sustain deep convection over the center, the environment appears conducive for strengthening as it tracks over 28-29C SST in a relatively light shear environment. In the short-term, dry air impinging on the circulation from the north may be an inhibiting factor, as well as the lack of initial structure, although this could be in the process of changing. The updated intensity forecast is close to the previous, and closely follows trends presented by SHIPS and IVCN consensus. Increasing vertical wind shear in the later periods may preclude strengthening to a hurricane.

The National Weather Service says that as the storm system passes by, “it could bring even stronger trade winds, and it may cause an increase in tropical moisture across the area from late this weekend into early next week.”