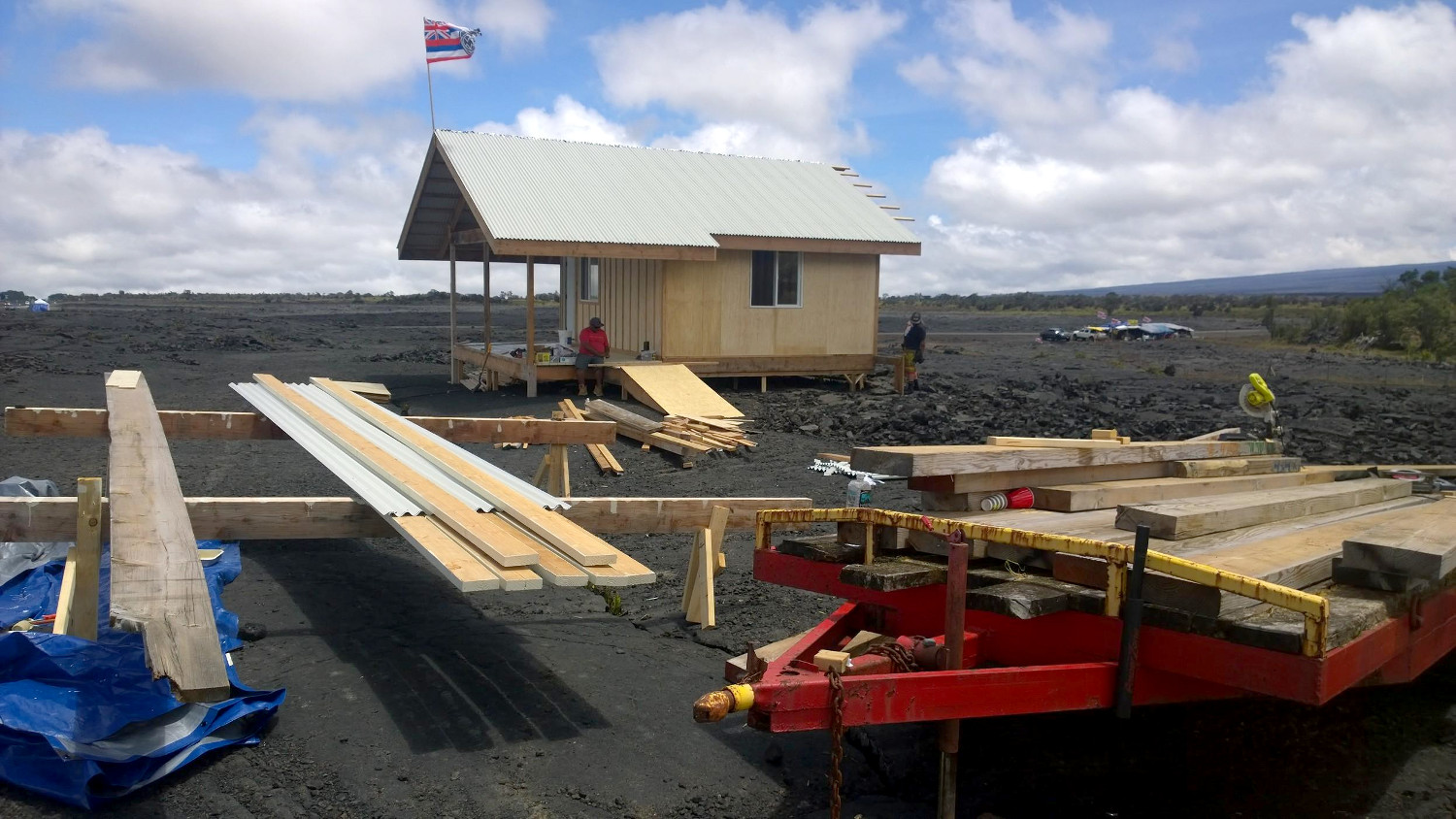 MAUNA KEA, Hawaiʻi - The influential Sovereign Council of Hawaiian Homestead Associations is stepping up to defend unpermitted structures built on trust lands, which they contend are exempt from county jurisdiction.

(BIVN) – The Sovereign Council of Hawaiian Homestead Associations chairman Robin Puanani Danner is weighing in on the controversy over unpermitted buildings on Hawaiian Homes trust lands, as opponents of the Thirty Meter Telescope continue their stand at the base of Mauna Kea.

On September 3, Mayor Harry Kim sent a letter to the Department of Hawaiian Home Lands chair William Aila, requesting that he “immediately investigate the reports of a structure being built near Kipuka Puʻu Huluhulu and to take necessary and appropriate action.”

Chair Aila issued a statement saying that “following a posted Noticed To Vacate, DHHL will remove the structure as soon as resources become available. Abandoned or seized property is then held pursuant to section 171-31.5, Hawaii Revised Statutes.” 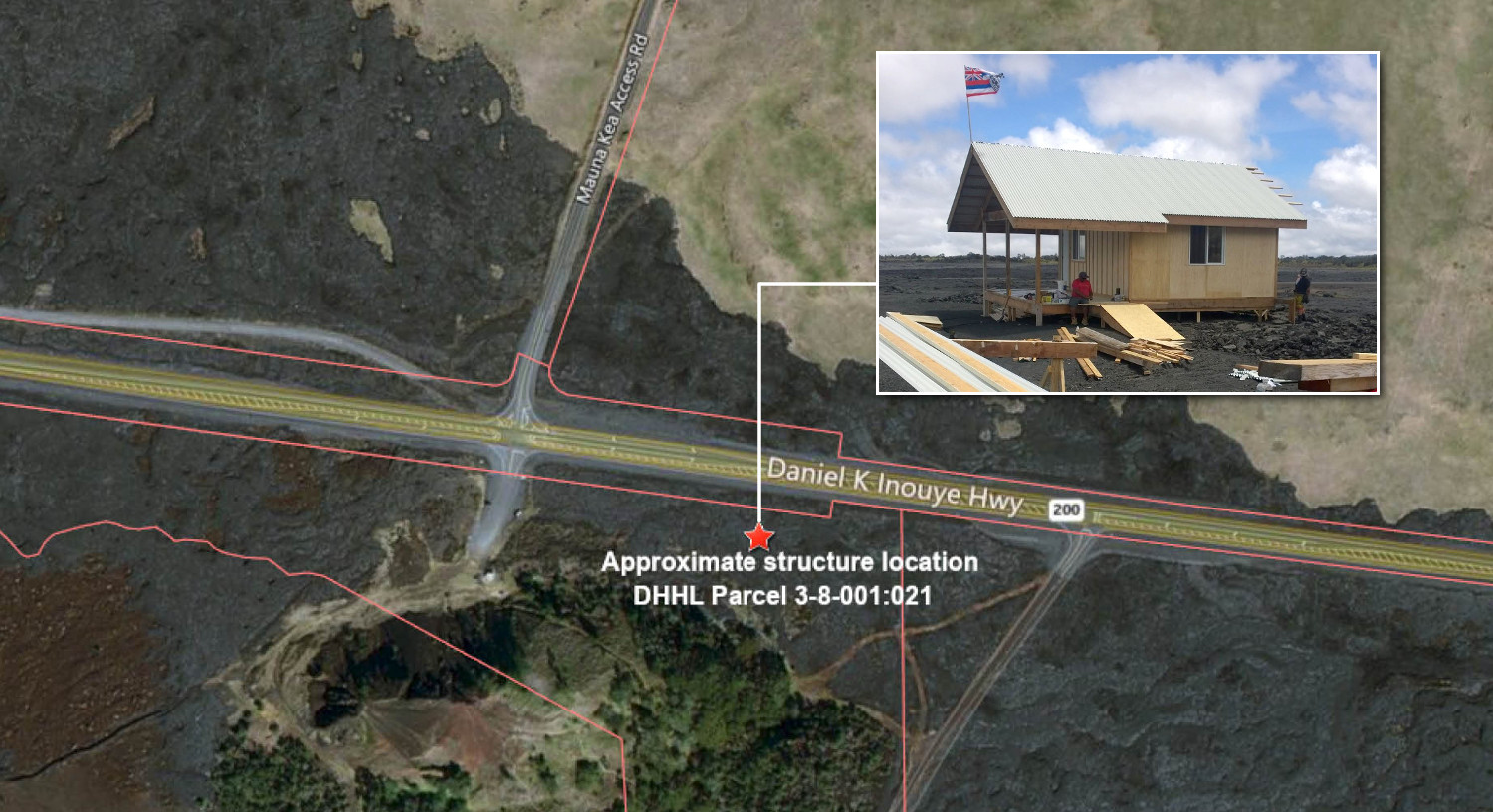 map provided by DHHL, image of the structure by Daryl Lee

The building appears more permanent than the surrounding tents erected at the encampment at the base of Mauna Kea where TMT opponents are holding space in defiance of the observatory project. It is said to be a “library and learning center” by those who are constructing it.

The building does not sit well with State Senator Lorraine Inouye, who ripped fellow lawmakers over the “rapidly deteriorating” situation in a recent letter. “Look at what’s being constructed? They are calling it a Learning Center? Have you ever helped a group in your community establish a learning center in your district? There are easily 30-40-50 difficult hoops to jump through to ensure the safety of everyone .. but here they are building it spontaneously in the middle of nowhere on public land – possibly conservation land or a roadway easement. No plumbing or sanitation, no assurance it will not be susceptible to fire or structurally sound. Is this really acceptable?”

But Danner and the SCHHA see things differently. Here is the letter that was sent to the mayor concerning his letter to DHHL:

The SCHHA was founded in 1987 by native Hawaiian leaders elected to various self-governing Homestead Associations located in numerous homestead areas across the State. Over the last 32 years, we have united 41 different homestead communities and areas on all islands, including Oahu, Kauai, Molokai, Maui, Lanai and Hawaii Island, to perpetuate and protect our rights under the Hawaiian Homes Commission Act of 1920. In short, the SCHHA is the largest and oldest coalition of beneficiary leaders and homestead associations in the State of Hawaii.

Mayor Kim, while the SCHHA appreciates your letter to the State of Hawaii agency responsible for administering our land trust within the construct of federal law, and federal oversight specified in the Hawaii Admissions Act of 1959, your letter regarding unpermitted structures on our trust lands is quite disturbing. Please be advised that our land trust is specifically exempt from county jurisdiction. Any threat of $1,000 per day fines, if paid from our trust funds held at DHHL, would be a serious breach of fiduciary duty.

We recognize your reference to a 2002 agreement between the State DHHL and Hawaii County, however, the SCHHA must state that any agreement that limits the rights of native Hawaiian beneficiaries, and in the case of Hawaii County, that threatens fines for unpermitted structures at $1,000 a day, if paid with our collective trust funds, is irresponsible, and exactly the kind of actions taken by government officials over the last 6 decades that do not honor our unique rights enacted by the U.S. Congress 100 years ago.

Mayor Kim, to be frank, as beneficiaries of the HHCA, our land trust does not belong to the State of Hawaii, and most certainly is not subject to Hawaii County demands. Our lands are held in trust for its owners, native Hawaiians as defined in the HHCA.

As has been completely revealed by the events on the Mauna for the world to see, the state of Hawaii has grossly mismanaged our Hawaiian assets, whether ceded lands or our HHCA lands, to deliver benefits time and time again, to government and corporate interests over the federal intent of both the HHCA and the Hawaii Admissions Act, to benefit native Hawaiians.

Please provide a copy of the agreement you cited between the State DHHL and Hawaii County. We request further, that you provide the minutes of the Hawaiian Homes Commission wherein this agreement was approved.

The SCHHA must review the basis of an agreement between state government and a county subdivision of state government, that effectively eliminates the federal exemption from county jurisdiction on Hawaii Island, provided to native Hawaiian beneficiaries of the HHCA

SCHHA leadership is a proponent of meeting safety codes and the like, especially to qualify for insurance coverage of our assets. We are not however, a proponent of limiting the self determination aspects of the HHCA, that removes the opportunities intended, for our lands to be self-governing and for future beneficiaries to pursue our own building and safety codes, including our own permitting agency.

Mahalo Mayor Kim, we appreciate your prompt response to our request for copies of Hawaii County’s agreement with the State, along with the minutes of the Hawaiian Homes Commission action on the agreement.

We also hope that you can embrace that the HHCA is a unique federal law, with specific self-determination intentions and tenets – for native Hawaiians, not for the State, and not for County governments.

At the same time, the SCHHA is “beginning the process to request a right of entry of our HHCA trust lands, for Kia’i use on the Mauna,” another media release from the organization said.

“We expect that any request should be for a 10 year period of time, subject of course to the needs and guidance of Kia’i, Hawaii Island associations, and individual HHCA beneficiaries across the globe on the Mauna,” Danner wrote. “Mahalo to all of the SCHHA Homestead Associations that directed this action on August 25th at the SCHHA Homestead Leadership Summit on Oahu. Mahalo also to, SCHHA Vice Chairman Sybil Lopez and Aunty Kanani Kapuniai from Waimea and a member of the SCHHA executive team.”

“It should be understood, that DHHL does not decide on land dispositions of our trust lands – the Commission does, some of which are HHCA beneficiaries themselves,” SCHHA wrote.

“While the Mauna situation continues, SCHHA leaders have determined that accessing our trust lands for safe and peaceful presence by Kia’i, is a prudent and proper land use request to be made,” Danner said. “We take this first step in that regard.”

Puʻuhonua o Puʻuhuluhulu leadership distanced themselves from the buidling, saying in a media release that “we have informed the individuals building the structure that neither the Royal Order of Kamehameha nor Puʻuhonua o Puʻuhuluhulu endorse or sanction the construction of immobile structures. We remain committed to maintaining only a temporary presence and a light footprint within the boundaries of the Puʻuhonua.”