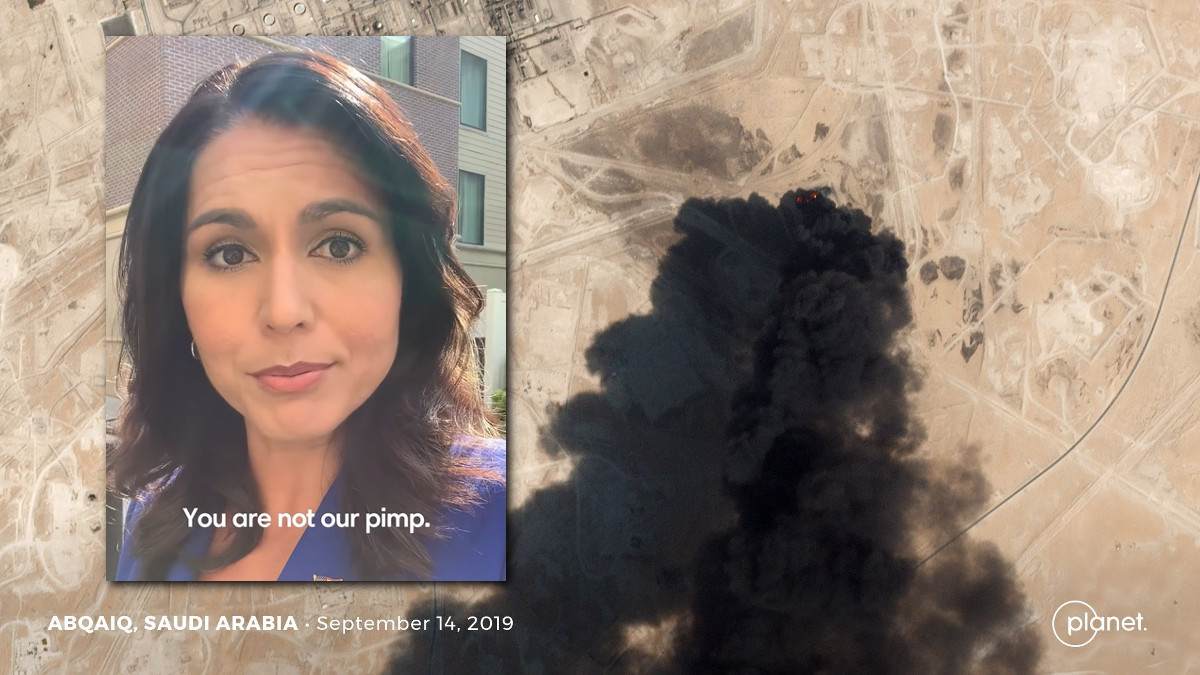 Gabbard To Trump On Saudi Oil Attack: “You Are Not Our Pimp”

WASHINGTON D.C. - The Hawaiʻi Congresswoman and Democratic presidential hopeful had some harsh words for the Commander In Chief on Monday, following Trump's tweets on the Saudi oil attacks.

In a video published to her various Tulsi 2020 social media accounts, Gabbard ripped Trump in a captioned, selfie-style cell phone video, telling the President that her “fellow service members are not your prostitutes”, and that “you are not our pimp.”

Gabbard took issue with this September 15 tweet from President Trump:

“Saudi Arabia oil supply was attacked,” Trump tweeted. “There is reason to believe that we know the culprit, are locked and loaded depending on verification, but are waiting to hear from the Kingdom as to who they believe was the cause of this attack, and under what terms we would proceed!”

It has been reported that the U.S. blames Iran for the attack.

“President Trump yesterday offered to place our military—my brothers and sisters in uniform—under the command of Prince Mohammad Bin Salman, the dictator of the Islamist Kingdom of Saudi Arabia.

Mr. President, as you know, I have never engaged in hateful rhetoric against you or your family, and I never will. But your offering our military assets to the dictator of Saudi Arabia to use as he sees fit, is a betrayal of my brothers and sisters in uniform who are ready to put our lives on the line for our country — not for the Islamist dictator of Saudi Arabia.

For you to think that you can pimp out our proud men and women in uniform to the Prince of Saudi Arabia is disgraceful and once again shows that you are unfit to be the commander-in-chief.

As a member of Congress and as a soldier, I and all of my brothers and sisters in uniform have taken an oath to protect and defend the Constitution of the United States of America, and nothing in our Constitution gives you the power to go to war without the express consent of Congress, what to speak of giving you the power to offer our military to a foreign power like the Kingdom of Saudi Arabia to use as they wish.

In short, your words and actions are a betrayal of my brothers and sisters in uniform, the American people, and our Constitution. I and my fellow service members are not your prostitutes. You are not our pimp.”

Trump later tweeted about the impacts the Saudi oil attack may have on U.S. oil prices.

“Based on the attack on Saudi Arabia, which may have an impact on oil prices, I have authorized the release of oil from the Strategic Petroleum Reserve, if needed, in a to-be-determined amount,” Trump tweeted on September 15, “sufficient to keep the markets well-supplied. I have also informed all appropriate agencies to expedite approvals of the oil pipelines currently in the permitting process in Texas and various other States.”

“PLENTY OF OIL!” he messaged.

Rep. Gabbard is the first female combat veteran to run for President. She continues to campaign, although did not participate in the most recent nationally televised Democratic candidate debate after she missed the qualifying criteria set by the Democratic National Committee. Foreign policy has been the centerpiece of her platform.