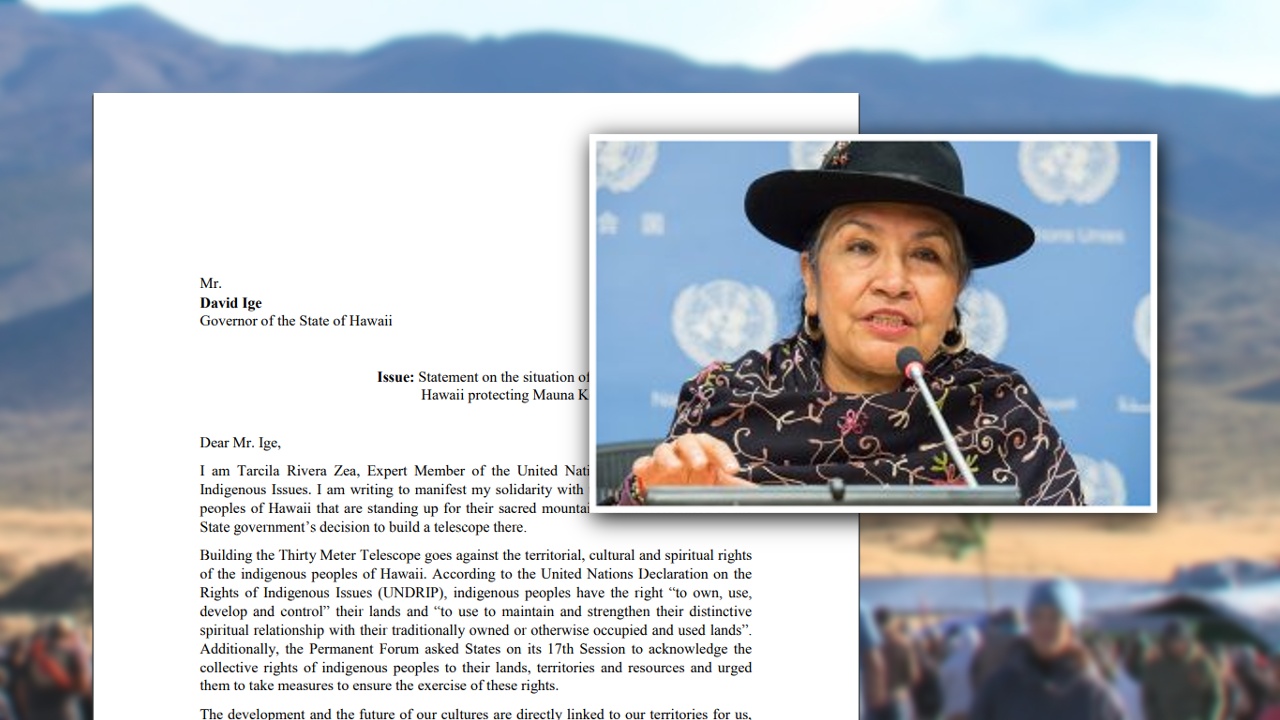 MAUNA KEA, Hawaiʻi - The letter by Tarcila Rivera Zea calls for "a participative dialogue between the State of Hawaii and Kanaka Maoli Protectors to seek a peaceful resolution to the tension on Mauna Kea."

(BIVN) – An Expert Member of the United Nations Permanent Forum on Indigenous Issues has written a public letter to Governor David Ige concerning the ongoing situation on Mauna Kea.

Tarcila Rivera Zea, a Quechuan activist from Peru, released a two page “statement on the situation of the indigenous peoples Hawaii protecting Mauna Kea” on September 14th. The letter was addressed to the Governor.

Her message, in support of the opposition to the Thirty Meter Telescope, came after formal communications were filed by the U.S. Human Rights Network Coordinating Center, requesting “deescalation at Mauna Kea”.

The letter from Zea reads:

I am Tarcila Rivera Zea, Expert Member of the United Nations Permanent Forum on Indigenous Issues. I am writing to manifest my solidarity with the fight of the indigenous peoples of Hawaii that are standing up for their sacred mountain Mauna Kea faced to the State government’s decision to build a telescope there.

Building the Thirty Meter Telescope goes against the territorial, cultural and spiritual rights of the indigenous peoples of Hawaii. According to the United Nations Declaration on the Rights of Indigenous Issues (UNDRIP), indigenous peoples have the right “to own, use, develop and control” their lands and “to use to maintain and strengthen their distinctive spiritual relationship with their traditionally owned or otherwise occupied and used lands”. Additionally, the Permanent Forum asked States on its 17th Session to acknowledge the collective rights of indigenous peoples to their lands, territories and resources and urged them to take measures to ensure the exercise of these rights.

The development and the future of our cultures are directly linked to our territories for us, indigenous peoples. Preserving the religious and cultural connection to Mauna Kea is a right of the indigenous peoples of Hawaii which is recognized by international law. The UNDRIP is very clear on this in article 12: “Indigenous peoples have the right to manifest, practise, develop and teach their spiritual and religious traditions, customs and ceremonies; the right to maintain, protect, and have access in privacy to their religious and cultural sites”. Allowing the desecration of Mauna Kea, putting at risk its biodiversity and ecosystem, and preventing indigenous peoples from carrying out their spiritual traditions, the government is ignoring the abovementioned rights.

To promote peace and reconciliation between the government and indigenous peoples, we encourage them to set on a participative dialogue with the protectors to seek solutions to this conflict, where all of the stakeholders are represented. Likewise, it is necessary to respect the human rights of the protectors and to ensure that protests do not have adverse consequences, especially in the light of the recent jailing protestants.

Moreover, taking into account the rights of indigenous peoples to be represented appropriately, we urge the media to communicate responsibly and to avoid biased reports that demonize indigenous peoples and represent them as a hindrance for science and progress, thus encouraging hatred and discrimination.

Thanks for your attention, consideration, and time.

When Big Island Video News contacted the Governor’s office for a response to the message, spokespersons for the Governor said they had not seen the letter.

If the activists say there’s no compromise, then it leaves the state with few options. We will enforce the law while making people aware of the facts that have been part of this decade-long legal process. A lot of misinformation is being circulated so we want to provide factual, accurate details so people can base their opinions on sound information rather than rumors. We encourage everyone’s patience as we work to find a peaceful way forward that respects community concerns and deeply held feelings.

Rosalee Gonzalez, the executive director of the United States Human Rights Network, was on Hawaiʻi Island in August.

Gonzalez was present to witness a failed attempt by Hawaiian Home lands beneficiaries and cultural practitioners to access the mountain on the closed Mauna Kea Access Road. At the time, Gonzalez said her organization was there “as human rights observers working closely with our partners at the United Nations to identify and address human rights violations within the U.S.”