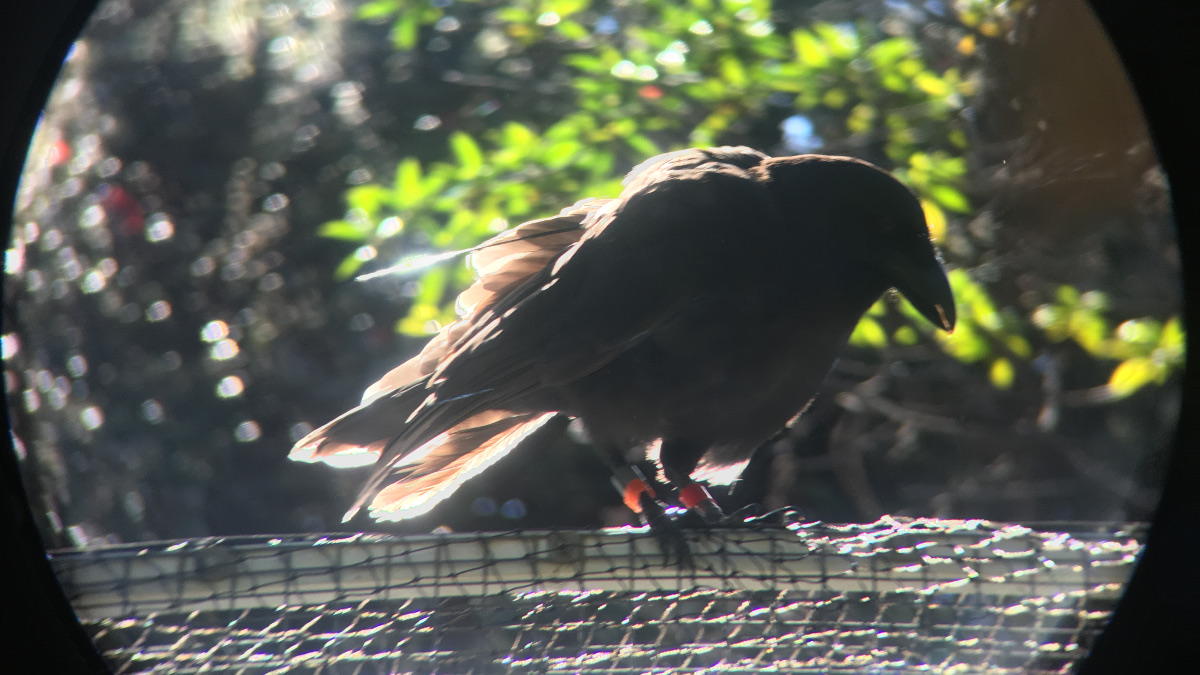 PUʻU MAKAʻALA NATURAL AREA RESERVE, Hawaiʻi - Reintroduction efforts continue for the ʻalalā, once extinct in the wild, with the additional release of seven more birds into the forest. 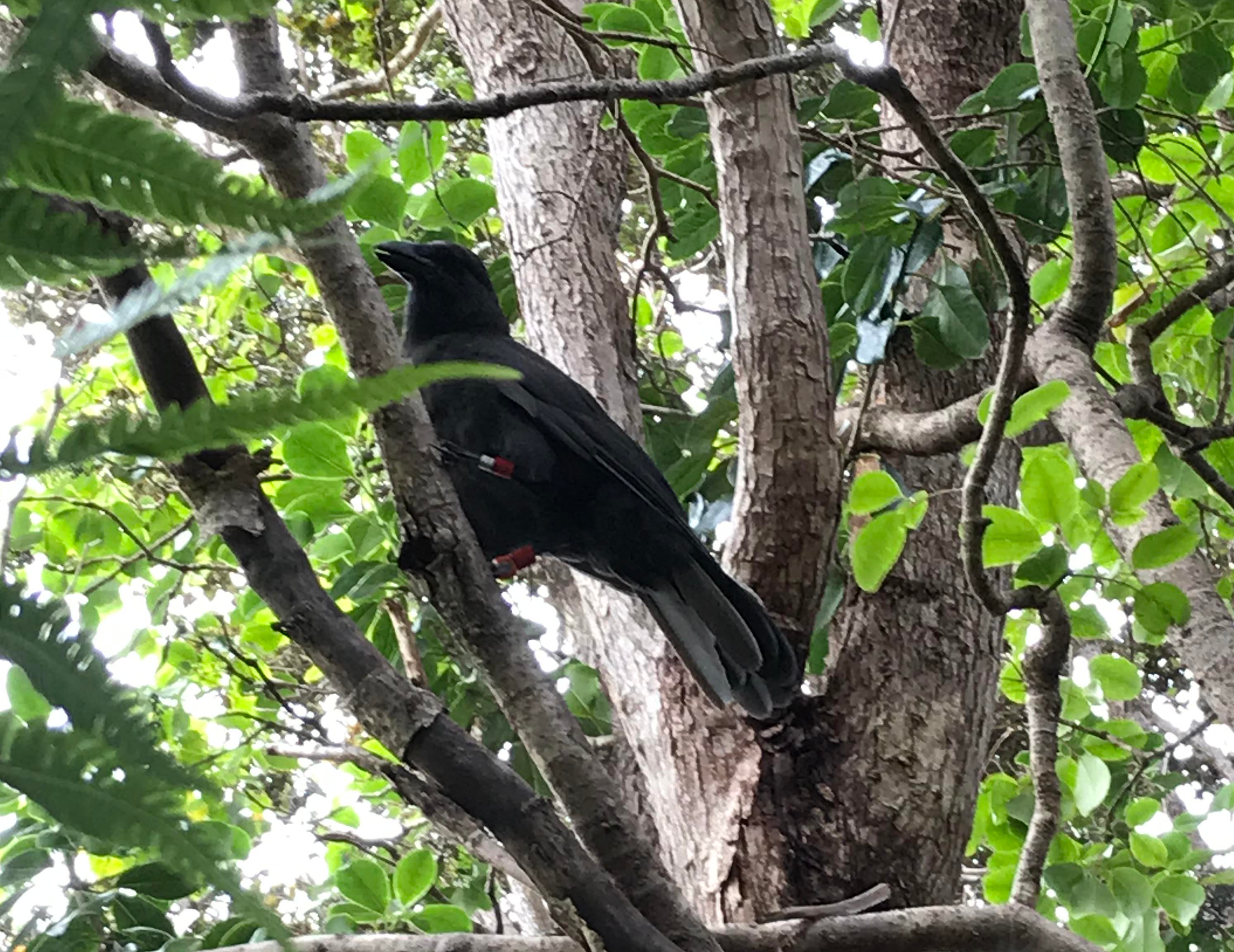 (BIVN) – Seven more ʻalalā, of Hawaiian crow, have been released into the forest on Hawaiʻi Island.

In a joint news release issued on Monday, the organizations behind the ʻAlalā Project announced the reintroduction of the additional native birds into Puʻu Makaʻala. The release stated:

This September, seven additional ʻAlalā were released into the Puʻu Makaʻala Natural Area Reserve (NAR) on the windward slopes of Mauna Loa. This release is part of the ongoing reintroduction efforts being conducted by The ʻAlalā Project, a partnership between the State of Hawaiʻi Dept. Of Land and Natural Resources Division of Forestry and Wildlife, San Diego Zoo Global, and the U.S. Fish and Wildlife Service.

The project team released five young males and two young females. One of the male birds, Kalokomaikaʻi, was first released in 2017 but had to be recaptured, and rehabilitated following an injury in the wild. The birds will join several groups of ‘Alalā already living in the forest. Since 2017, recovery efforts have led to about twenty birds surviving and thriving in the forests of Puʻu Makaʻala NAR.

The newly released birds were given Hawaiian names by students from local schools on Hawaiʻi Island – Ke Kula ʻO Nāwahīokalaniʻōpuʻu, Mountain View Elementary School, Kamehameha Schools Hawaiʻi Campus , E.B. DeSilva Elementary School, Connections Public Charter School, and Kamehameha Schools. Their names are Keolamauloa, Eola, Kamanuolamau, Kalāʻau, ʻAlohi, and Kanaʻi. “The naming contest is an exciting way for keiki to connect to these birds and be a part of conservation efforts happening within their island home,” explained Rachel Kingsley, Education and Outreach Associate for The ʻAlalā Project.

During the reintroduction process, The ʻAlalā Project monitors the birds’ behaviors and movements regularly. Observers documented several major milestones this summer when birds that were released in 2017 began to show breeding and courtship behaviors like feeding and preening one another, making territorial vocalizations, and nest building. Three pairs of birds developed pair bonds this breeding season: two of these pairs were seen nest-building, and one of the females, named Manaiakalani, sat on her nest for several weeks. During that time, the male, Manaʻolana was seen providing her with food on the nest. After there was no hatching observed, the birds remained in the nest tree area and continued defending their territory around it. “‘Alalā form complex bonds as breeding pairs and must work together to build their nests. Having released ‘alalā engage in the full suite of breeding and nest building behaviors in their first season as adults represents a huge step forward for the program and their recovery as a species,” commented Alison Greggor, Postdoctoral Research Associate, Hawaiʻi Endangered Bird Conservation Program, San Diego Zoo Global.

Each milestone brings additional lessons learned. As the birds mature and grow their territories, project members must adjust and adapt their techniques to changing conditions. Since 2017, two birds have been confirmed deceased, one from ʻIo (Hawaiian Hawk) depredation, the other showed signs of an undetermined predatory attack and scavenging. “While the potential for loss in reintroductions is a reality, reasons for loss may be part of the current ecological system or are unknown, so an adaptive approach is crucial to refining and improving the reintroduction strategy” commented Jackie Gaudioso-Levita, ʻAlalā Project Project Coordinator with the State of Hawaii Department of Land and Natural Resources, Division of Forestry and Wildlife.

“Recovering threatened and endangered species is bigger than any one community or agency. It takes everyone working together. Together we can ensure a healthy future for not only these birds, but the forest ecosystem as a whole,” said Michelle Bogardus, U.S. Fish and Wildlife Service Geographic Team Leader for Maui Nui and Hawaii Island.

The birds will continue to be monitored and tracked to observe their foraging, social interactions, spatial range, and breeding attempts as well as the success of the program, overall. Meanwhile, the project is planning for the future. “It’s a privilege to be part of the effort helping ‘Alalā return to the forest once again, which is beginning to reveal what an intact forest ecosystem was once like here in Hawaiʻi,” said Martha Kawasaki, Senior Research Coordinator, Hawaiʻi Endangered Bird Conservation Program, San Diego Zoo Global. The recovery of ʻAlalā in the wild will take many years and the partners of the project are working diligently to continue to bring ʻAlalā home.

The ʻAlalā Project – which is working to establish a self-sustaining, wild population of ʻAlalā in the wild – is a partnership between major partners of the State of Hawaiʻi Department of Land and Natural Resources Division of Forestry and Wildlife, the US Fish and Wildlife Service and San Diego Zoo Global.