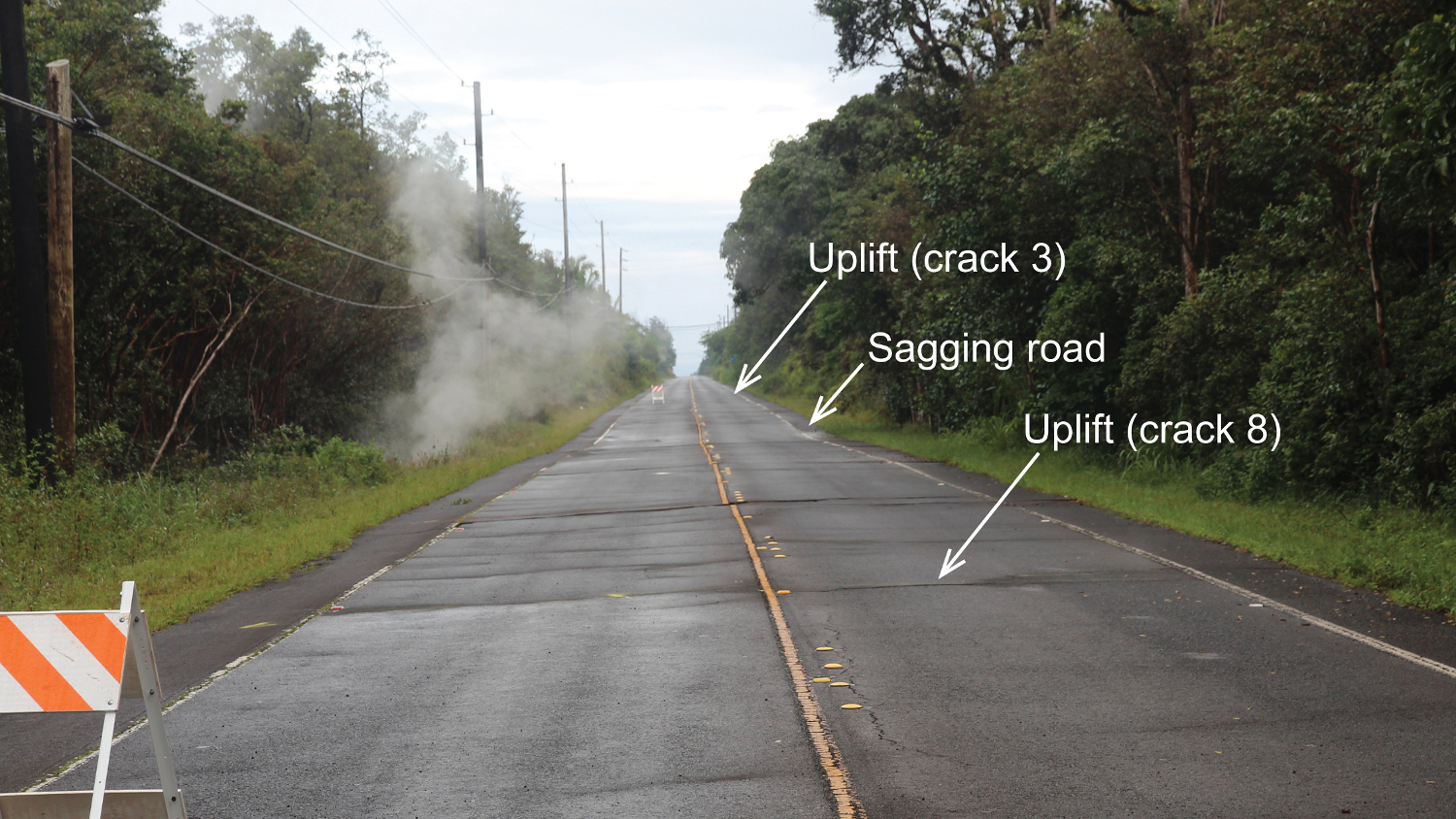 On May 10, 2018, Highway 130 (shown here) was newly cracked with steam coming up from the east side of the road due to the dike (tabular body of magma) that intruded Kīlauea’s lower East Rift Zone. The two orange and white road markers are on slightly uplifted areas of the highway, which are about 100 m (330 ft) apart. Half way between the uplifted areas, the road is sagging, a result of the magma intrusion beneath the highway. USGS photo by C. Parcheta.

PUNA, Hawaiʻi - Highway 130 has been open since July 3, 2018, after the destructive eruption on the lower East Rift Zone of Kīlauea closed the road roughly two months earlier.

(BIVN) – Highway 130 remains a visual reminder of the dramatic volcanic activity that occurred over one year ago on the lower East Rift Zone of Kīlauea Volcano.

USGS Hawaiian Volcano Observatory geologist Carolyn Parcheta wrote about the area – which is still hot and steaming – in this week’s Volcano Watch article:

Even though Kīlauea Volcano’s lower East Rift Zone eruption has been over for about a year, steam continues to appear in new places or reappear in old places, and vegetation continues to die because of lingering heat and steam in areas of the 2018 fissures.

Some residents are concerned about continuing (or potentially new) volcanic activity in the lower East Rift Zone (LERZ) because they are feeling, seeing, and smelling the heat, steam, and odors that remain in the area. In fact, the most common questions USGS Hawaiian Volcano Observatory (HVO) geologists who work in the LERZ hear are, “What is that smell?” “How much gas is still coming out?” and “How deep is the magma below me?”

HVO’s July 18, 2019, “Volcano Watch” article addressed the lingering heat and gas aspect of the story. This week we examine how deep the dike (the intrusive body of magma that fed the 2018 LERZ eruption) might be.

On May 5-7, 2018, when fissures 7-12 were opening farther to the west, or up rift, of Leilani Estates, the pavement on Highway 130 cracked and began to sag. As it did, the area was immediately engulfed in steam and sulfur dioxide gas, so much so that you could not see across the road!

A dike is an elongate tabular body (envision a knife blade) that runs parallel to the rift zone. It is fed by magma from deeper within the rift zone core.

As magma rises in a dike, it pushes the surrounding rock apart to make room for magma to reach the surface. This causes the ground directly above the dike to sink, and ground on either side of the dike to lift.

As a dike continues moving toward the surface, the sinking, or sagging, above it can progress to form a linear depression with well-defined walls—a feature that geologists call a graben. In 2018, Highway 130 experienced sagging, but a graben did not form across the road.

As soon as Highway 130 sagged and increased heat and gas were observed, HVO field crews documented and numbered 10 major cracks opening across the road. The total extension measured across these 10 cracks was 22 cm (8.6 in) over two days. We were unable to continue measuring crack widths when steel plates were placed on top of them to keep the road open and allow the safe flow of traffic.

Sagging and cracks in the road, as well as increased heat and gas output, meant that magma was rising closer to the surface under Highway 130. At the same time, new fissures were opening closer to the highway.

Although steel plates concealed the growing cracks, HVO geologists had other ways to determine what was happening below the road. Sagging ground on Highway 130 and in neighboring properties provided valuable information about where the magma was located.

Theoretical calculations of ground deformation around a dike have been known to volcanologists for decades. Previous modeling shows that the horizontal distance between two uplifted sections of ground above a dike is directly related to dike depth below the surface.

Using the aforementioned model, we can determine how close magma came to reaching the surface where Highway 130 cracked and sagged in 2018. Based on a 100 m (330 ft) distance between uplifts on either side of the down-dropped area, the upper edge of the dike must be only 50‒100 m (about 165‒330 ft) below the highway!

Thankfully, the portion of the 2018 dike below Highway 130 did not have enough energy to reach the surface. Now that the uppermost dike is probably solidified, the 2018 magma just below the surface of the highway and neighboring properties will remain frozen in the ground as solid rock.