HILO, Hawaii - The board did not approve a Notice of Intent to Decommission the small, educational telescope on Mauna Kea, although the TMT permit requires it to come down.

(BIVN) – The Mauna Kea Management Board on Friday did not accept the Notice of Intent to Decommission the University of Hawaiʻi’s Hōkū Keʻa telescope, voting down a resolution to do so during a meeting in Hilo.

The small Hōkū Keʻa observatory (20 feet in diameter) has been identified as one of the existing telescopes mandated to be taken off the UH-managed summit of the mountain, as per the conditions of the Conservation District Use Permit allowing the Thirty Meter Telescope to be constructed on Mauna Kea. 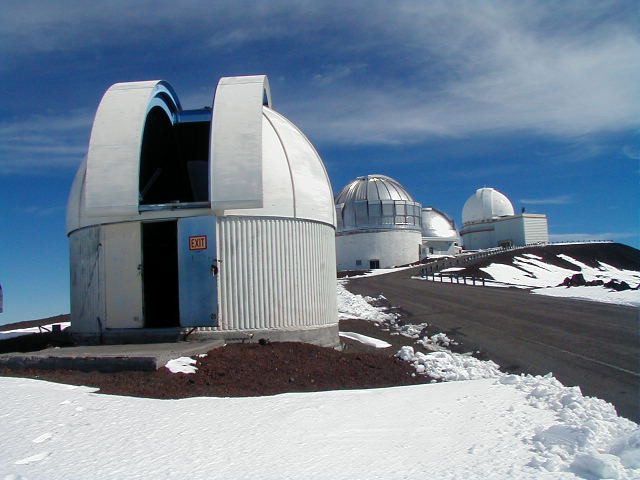 The decommissioning process is already underway for the Caltech Submillimeter Observatory. The University of Hawaiʻi-managed UKIRT telescope also needs to come down, in accordance with the TMT permit.

According to the agenda document (which was dated September 2015, the first time the Notice of Intent to Decommission went before the Mauna Kea Management Board and was deferred):

The Hoku Kea telescope is a 36-inch telescope intended for educational purposes. It was purchased and installed with funding from the National Science Foundation to support the UH Hilo undergraduate astronomy program and affiliated school/ community outreach programs. The telescope is located in an observatory structure that was originally constructed in 1968, and was later renovated for use with Hoku Kea. The renovation and telescope replacement were conducted in accordance with Conservation District Use Permit1 (CDUP) HA-3406 approved by the Department of Land and Natural Resources (DLNR) on May 2, 2007. The observatory renovation was completed in 2008 and the Hoku Kea telescope was installed in 2010.

Numerous defects plagued Hōkū Keʻa once the telescope was installed, however, and the observatory never became operational. The technical difficulties made it an easy target for decommissioning. The state was under pressure to reduce the number of facilities on the summit as the $1.4 billion TMT project made its way through the approval process.

During Friday’s meeting, several UH students, and even a few TMT opponents, spoke out against the decommissioning.

This testimony was accidentally omitted from the longer video (above). Deborah Ward of the Sierra Club Moku Loa Group is one of the petitioners who argued against the Thirty Meter Telescope planned for Mauna Kea, and went to court in an attempt to stop the $1.4 billion observatory. But in this instance, Ward said she does not agree with the plan to remove the small, Hōkū Keʻa telescope from the mountain summit.

Students also spoke in support of an idea to move the observatory down to the area of Hale Pohaku.

The board agreed with the students, for the most part, that moving the small observatory to Hale Pohaku would be a good resolution. Still, members were concerned that another deferral of the matter would not send a strong message the the UH Board of Regents.

Big Island Video News will have more from Friday’s meeting of the Mauna Kea Management Board.