VIDEO: The New Kilauea Crater Lake And The Water Table

NOTE: This is part two of a two part series featuring a recent video produced by the USGS Hawaiian Volcano Observatory about the new water pond at the summit of Kīlauea. Big Island Video News is presenting the content in two parts. The first part featured geologist Matt Patrick. The second part features geophysicist Jim Kauahikaua. There has been some alteration to the presentation of the video but the content remains the same.

(BIVN) – Here is a transcript of what USGS HVO geophysicist Jim Kauahikaua presented in the video:

Over the last two centuries, in the history of the observation of Kīlauea crater and Halemaʻumaʻu, there had not been any recorded water. Frequent visitors to the to the caldera, especially in the winter, know that rainfall will pond on the crater floor in small patches. But, you know, they’re very small and they usually evaporate during the following day, if it’s not continuing to rain.

Rainfall retention is a little bit higher outside the crater because all the ash deposits are making it more difficult for rain to percolate out into the rock. But still, you know, the existence of a persistent crater lake is not known over the last two centuries.

Questioning the Hawaiian kūpuna about whether there are mentions of water lakes at the summit have not turned up anything in mele or other recordings.

The water table under Kīlauea volcano has been there for decades, if not centuries. Over the last several decades it’s been roughly in the same place of several hundred meters below the crater floor. It was originally discovered in 1973 when a National Science Foundation research drill hole was drilled about a mile south of where the lake is now. It drilled down to sea level, but it found water just about 500 yards below the crater floor.

Water in the well has been monitored since then, off and on, and it’s level has varied a bit, but not not a whole lot. Probably less than 10 or 20 yards … since 1973. Many people have looked to see whether the water level would be affected by summit activity and there were some differences that could be ascribed at those volcanic events, but nothing very definite. And certainly, during the collapse in 2018, many of us thought that there would be a large change in the water level, but there wasn’t. We were all kind of stumped when there was this huge collapse that took the bottom of Halemaʻumaʻu crater below where the water level was thought to have been, and there was no water there.

Over the last year we’ve kind of accepted that maybe there were some error in the water table estimates early on, but in July there was water coming back into the crater, and we hypothesized that it either was the returning water level of groundwater, or accumulated rain water from just the nearby surficial rainfall. But it’s steady growth and its color suggests that it’s part of the groundwater system that’s recovering from the 2018 collapse.

In 2008, when the magma rose up to the crater floor – it eventually created the lava lake as it was rising through the groundwater – it apparently developed a steam sleeve around it, to insulate the groundwater from the magma. Therefore, essentially, preventing more explosive interactions.

In 2018, when the crater floor collapsed, the groundwater either dropped with the crater floor, or somehow vacated that space, and it became quite a bit deeper. After the collapse, the which is shown as a V [above], in cartoon style – by the V is about 2,000 feet deep – but the water table went down with the collapsing crater floor and it was well below the bottom of the new Halemaʻumaʻu pit.

With time that rose, and in July of this year it became visible at the bottom of the pit. And it’s continued to rise ever since. From the 1973 drill hole, we know how deep the water table is at that location, about a mile south of the current crater lake. With geophysical information from around the crater and the crater floor, we think that the water table may be a bit higher to the north side of the crater.

As the water table returns, it’s seeking hydraulic equilibrium with the water table around it. Also, it may actually – it probably will – go up to at least the level of the water in the well to the south of the caldera. But it may go a little bit higher. We know this from examples of mine lakes, on the mainland where mines are excavated to depths greater than the water table, and in order to continue mining they have to pump all the water out while the mine is active. Once the mine becomes inactive and is no longer used, the pumping stops and they allow the groundwater to come back. So there are many observations of this process of water coming back to seek equilibrium with the groundwater around it. There have been a few models that suggest, pretty much as we’ve hypothesized, this will be a slow process.

In our rocks, the rise is quite rapid compared to what it would be in a different type of rock on the mainland. But it’s doing exactly what it should. It should slow down as it approaches a hydraulic equilibrium level.

Today the water tables continue to rise. We expect it to rise another 60 or 70 yards before it reaches hydraulic equilibrium with the groundwater around it.

The groundwater underneath the crater is confined by structures around it. Its called high level water, because it’s so high above sea level, does not extend to the ocean.

For example, it cuts off about at Koaʻe Fault Zone. 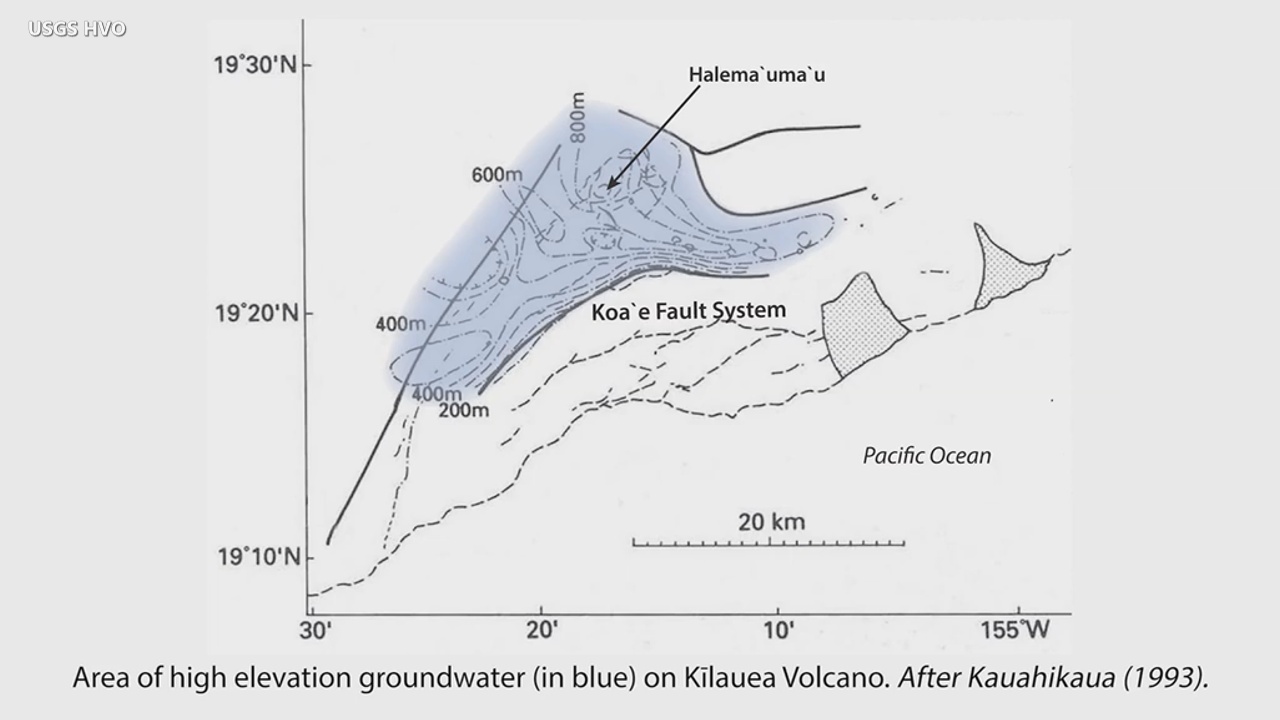 There’s some sort of structure within those fault zones that impounds, it keeps the water high, within the caldera. The water kind of sits underneath Kilauea caldera, and no evidence that it goes very far, and certainly not within the rift zone. But the rift zones themselves also act as hydraulic barriers to groundwater. Locally, for example, the area between Pāhoa and Keaʻau; there’s a huge amount of groundwater going through that, but the East Rift Zone confined that to the north of
the rift zone. 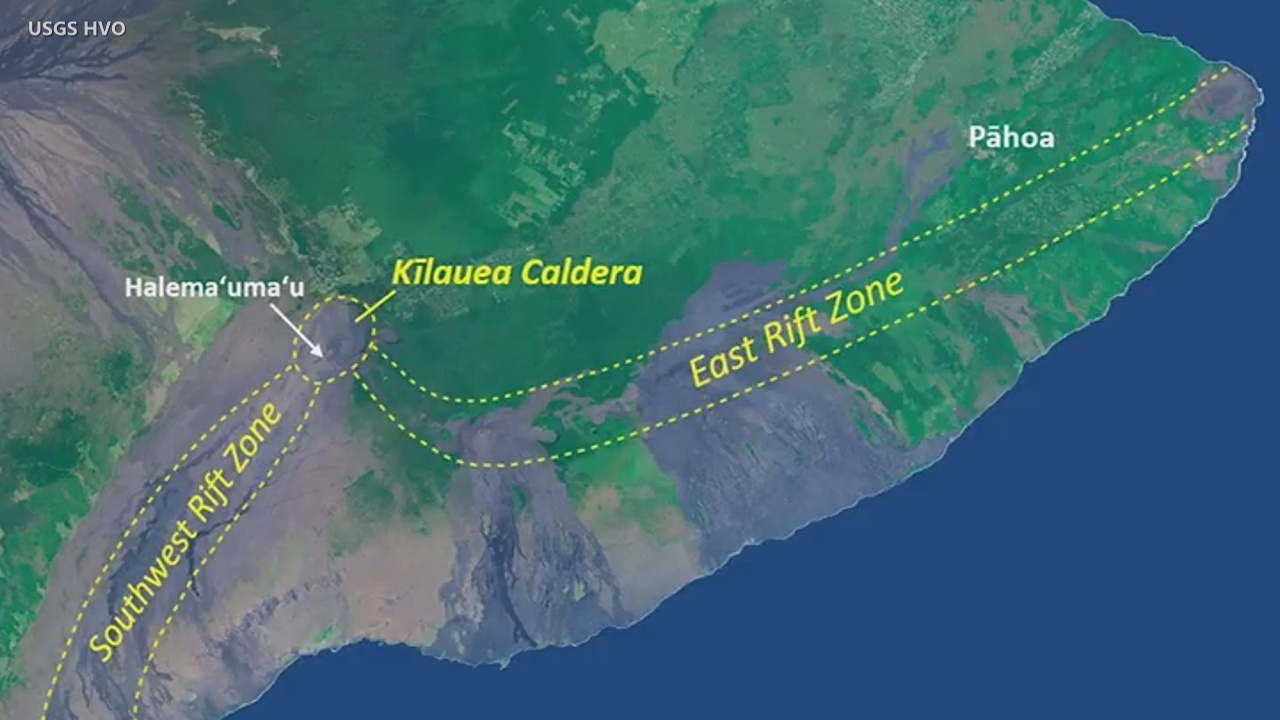 We know from our observations of coastal entries that lava mixing with water of any kind – ocean water or freshwater – can result in minor explosions, but it doesn’t always. Sometimes the lava goes just straight into the ocean, without much interaction. We’ve seen that also. So it’s not a guarantee that lava encountering this crater lake at the summit, will create even a minor explosion. But it might and so we should be prepared for that.

There are geological inferences that larger explosions have happened. Modeling, based on the inferences from past explosions centuries ago, suggest that two things have to occur for the water lake to contribute to explosions. That is: the existence of the lake, and the second is very fast rising magma coming to the surface; faster than we probably seen in the last two centuries at the summit.

We should be positioned fairly well to see precursors of such activities since it would be relatively unusual to what we’ve seen in the past.