HILO, Hawaiʻi - On Tuesday, October 15, a Hawaiʻi County Council committee will hear Bill 101, limiting the use chemical herbicides on County parks and roads. 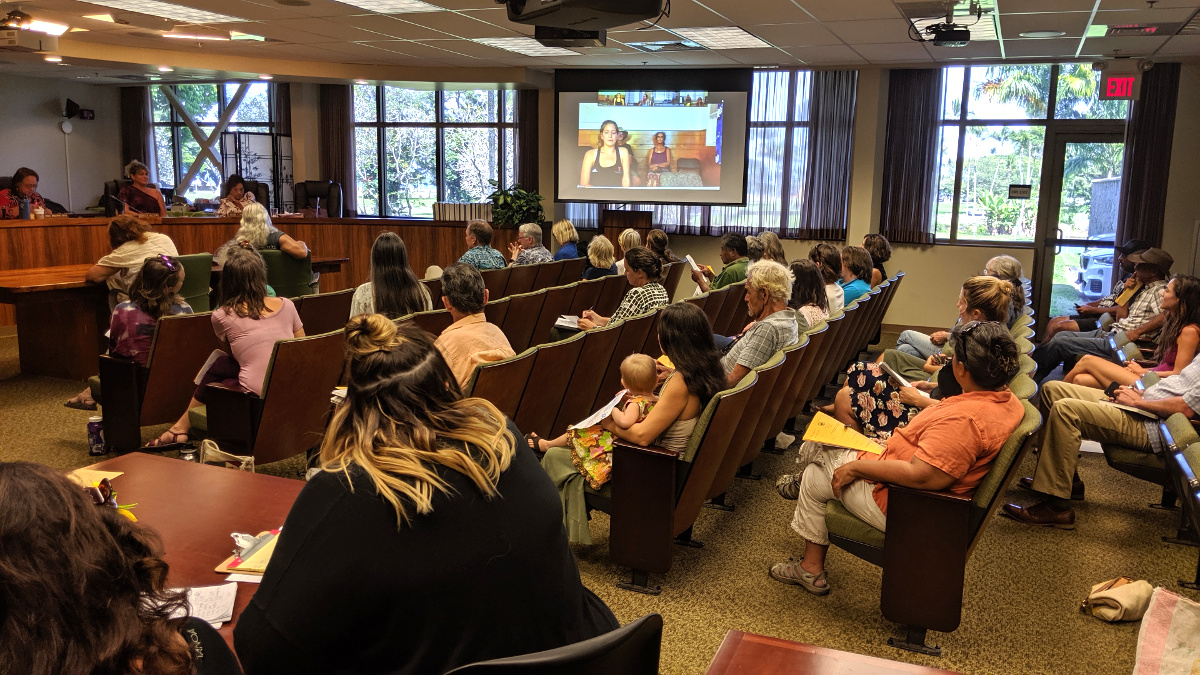 The council chamber in Hilo was packed with public testifiers today. Photo by David Corrigan.

UPDATE (6:45 p.m.) – The Hawaiʻi County Council Committee of Agricultural, Water, Energy and Environmental Management voted to advance Bill 101 to the full council with a positive recommendation. All 7 councilmembers present for the hearing voted in favor of the bill. Councilmembers Tim Richards and Matt Kanealiʻi-Kleinfelder were excused.

NOTE: We are updating this page to include some video recorded during today’s council meeting in Hilo. We will have more information, including the results of today’s vote, later this evening.

Video by David Corrigan, published to YouTube on October 15, 2019.

(BIVN) – After years of trying to successfully introduce a bill that would put an end to Hawaiʻi County’s use of chemical herbicides, a council committee will give it another try on Tuesday.

This joint press release was issued by Greener Hawaii and Hawaii Island Sierra Club in advance of Tuesday’s hearing.

There will be less worry about the health of the island and its people, children, pets and wildlife if Rebecca Shute-Villegas’ Bill 101 to limit the County’s use of chemical herbicides is approved by the County Council.

District 7 Councilwoman Villegas is introducing the bill on Tuesday, October 15, to the Committee of Agricultural, Water, Energy and Environmental Management. If approved in committee, the bill will move forward to Council for a full vote.

The bill would prohibit the use of toxic pesticides and herbicides on all county-owned parks, roads, bikeways, sidewalks, trails, drainage ways, and waterways. It allows for a four-year transition period and establishes a Vegetation Management Transition Commission to guide the conversion to organic practices. The bill exempts County agricultural lands that are leased out to any other entity besides the County.

During the transition period to alternative methods, steps will be required to reduce the use of prohibited herbicides, all label instructions will need to be adhered to, and notification of herbicide use will be improved.

“Working collaboratively with the Mayor’s office and the departments of Public Works, Parks & Recreation, and Environmental Management, I am honored to bring forth this legislation that will require and facilitate Hawaii County’s transition to new and safer technologies to maintain our parks and roadways,” said Villegas. “While I have the privilege of presenting this legislation, credit must be given to former County Councilwoman, Jennifer Ruggles, and her Legislative Aid, Blake Watson, for its inception. Please come and share your support of Bill 101. Your voice makes a difference.”

The public is invited to attend and testify in person at the Hilo Council Chambers located at 25 Aupuni Street or by video conference from the Kona Council Chambers and video conferencing locations in Kohala, Waimea, Ka’u and Pahoa. Following public testimony, Beyond Pesticides will provide a 45-minute presentation on the issues associated with current herbicide use and the alternatives available.

For those who can’t attend, they can email their testimony regarding Bill 101 to counciltestimony@hawaiicounty.gov by noon October 14th.

The safety of glyphosate herbicides (one common brand name is Roundup) and others used by the county became a much-discussed topic after a visit to Hawaii in June by Dewayne “Lee” Johnson, who won the first lawsuit against Monsanto after contracting non-Hodgkins lymphoma from exposure to glyphosate as a school groundskeeper. He spoke at a community meeting in Oahu voicing concerns about the use of herbicides and pesticides by the DOE. Afterwards, Board of Education Superintendent Christina Kishimoto announced an immediate halt to use of chemical pesticides and herbicides on Hawaii school campuses.

Children have unique susceptibilities to the potential toxicity of herbicides, yet they are still being exposed every day when they go to County parks or walk or ride along the roads.

“Evidence demonstrates associations between early life exposure to pesticides and pediatric cancers, decreased cognitive function, and behavioral problems,” according to the American Academy of Pediatrics. 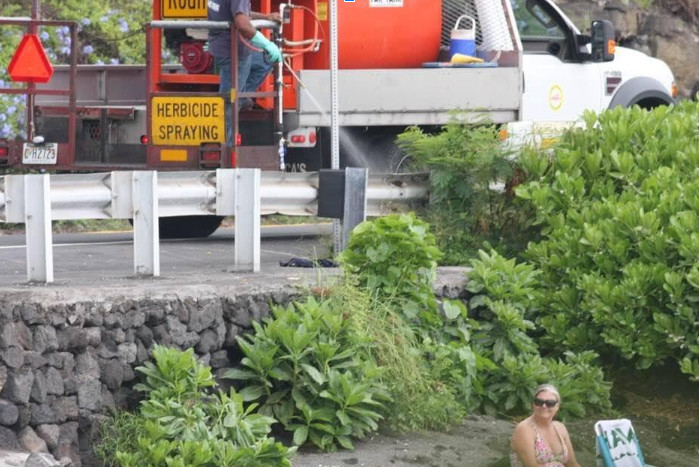 Long-term exposure is linked with increased risks of cancer including non-Hodgkin’s lymphoma, miscarriages, attention deficit disorder and reduced production of sex hormones. A newly published study in Frontiers in Genetics shows that a very low concentration of glyphosate (in the parts per trillion range and thus environmentally relevant for everyone) can trigger aggressive breast cancer when combined with other risk factors.

What does glyphosate do to our fragile environment? Studies indicate that it can contaminate streams, which empty into our oceans, and affect sea life including fish and coral. Problems with drift of glyphosate herbicides occur frequently.

What do those opposed to the bill fear? The cost. “The notion that the county cannot afford alternatives to Roundup has proven false time and again,” said Greener Hawaii volunteer Diane Koerner. “Efforts to ‘green’ Hawaii’s parks and roadsides began in the 1990’s with five trial oceanfront parks in Hilo and 20 miles of roads. They were manually maintained, which required some volunteer help in the beginning, but cost less in the long run.”

George Yoshida, then Director of Parks & Recreation, said, “Maintaining the parks without herbicides takes more manpower, but herbicide-free parks have proved to be affordable, especially considering the money saved on purchasing and applying herbicides.” 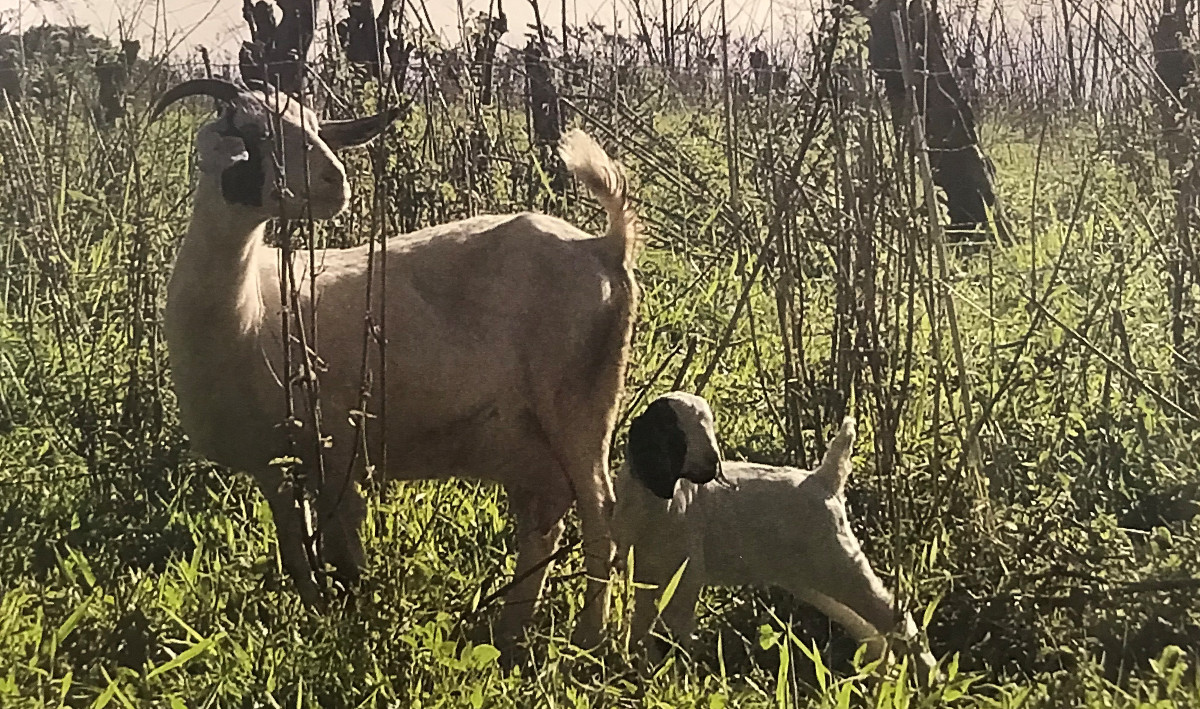 This past July, 3C Goat Grazing was hired by the county’s Department of Parks and Recreation under a pilot project to clear brush at the Hilo Soccer Field. Officials were impressed with the results and the price – less than the cost of regular maintenance, said 3C’s Mark Crivello.

Video edited by David Corrigan, published to YouTube on October 14, 2019.