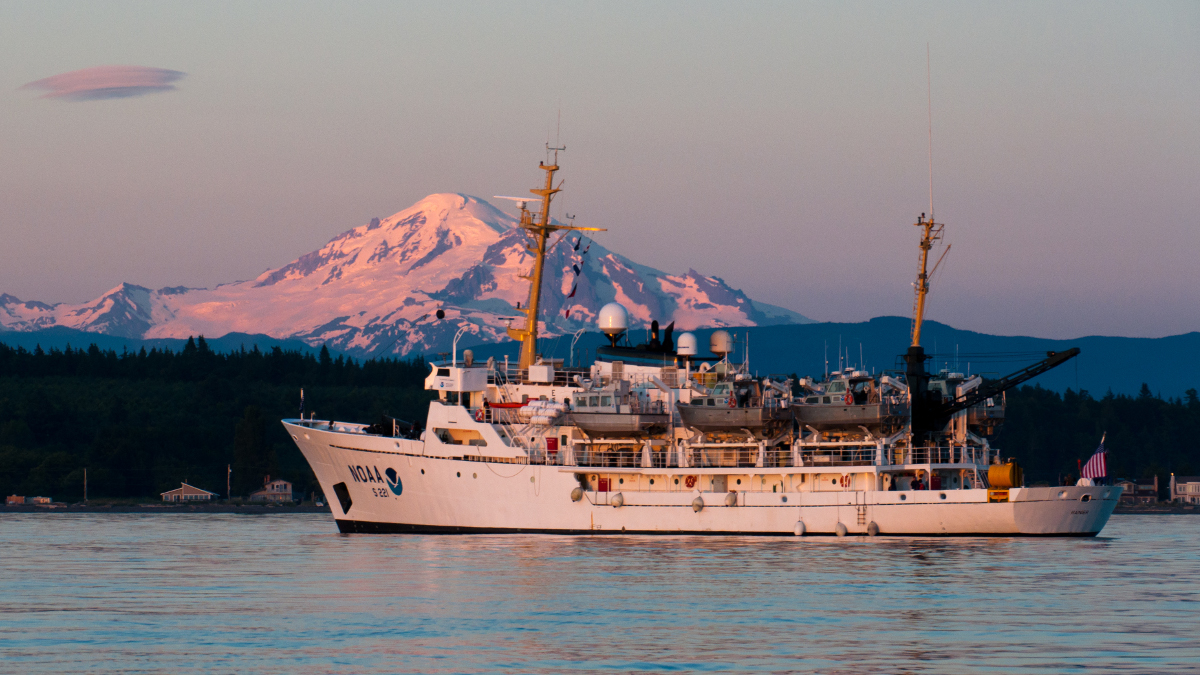 he National Oceanic and Atmospheric Administration Ship Rainier is backdropped by Mount Baker, an active Cascade Range stratovolcano, in Washington. In September 2019, the Rainier conducted a bathymetric survey along Hawaiʻi Island's Puna coast, where lava entered the ocean during Kīlauea Volcano's 2018 eruption. Photo courtesy of NOAA.

(BIVN) – A large ship was recently seen off the coast of Puna, where new lava deltas were created during the 2018 eruption of Kīlauea volcano.

In this week’s Volcano Watch article, U.S. Geological Survey Hawaiian Volcano Observatory scientists explain who was at the helm of the vessel, and what the ship was doing.

In late September 2019, East Hawaiʻi residents with ocean views may have noticed an unusual ship—too small for a cruise ship, too big for a fishing boat—sailing just offshore of the 2018 lava deltas along the Puna coast. It also entered Hilo Harbor, where it deployed several smaller boats that canvassed the bay within the breakwall.

The ship—named “Rainier”—is a National Oceanic and Atmospheric Administration (NOAA) hydrographic survey vessel based out of Oregon. It is part of a fleet that surveys the bathymetry, or underwater topography, of coastal waters around the United States. These surveys are used to update nautical charts and various digital products in support of marine commerce and transportation, as well as navigation safety. The ship also measures various properties of the ocean water column, such as salinity, and supports dive operations.

The NOAA Ship Rainier, with a crew of approximately 50—a mixture of uniformed NOAA officers and civilians—works primarily in Alaska, but special circumstances this year brought it to Hawaii. After spending time in the Papahānaumokuākea Marine National Monument and elsewhere in the Hawaiian Islands, the Rainier arrived in waters around the Island of Hawaiʻi. Among other tasks, this leg of its journey provided a special opportunity to re-survey the lava deltas formed by Kīlauea Volcano’s 2018 lower East Rift Zone eruption.

Because NOAA’s core mission is to maintain up-to-date nautical charts, the Puna coast became an important objective given the changes that occurred there in 2018. However, interest in the data goes beyond hydrography. Views of the submarine slopes help USGS Hawaiian Volcano Observatory (HVO) volcanologists to better understand ongoing processes that affect stability of the newly-formed lava delta in Kapoho Bay, along with other hazards along the new coastline. An August 2018 survey by the Exploration Vessel (E/V) Nautilus, operated by the Ocean Exploration Trust, provides a baseline to identify bathymetric changes over the past year.

The NOAA Ship Rainier, like the E/V Nautilus, surveys bathymetry using a multibeam echosounder (SONAR) mounted to its hull. This system transmits acoustic waves in a fan along the beam of the ship, perpendicular to the ship’s length. As these waves reflect off the ocean floor and back to the ship, a highly-sensitive receiver measures the time that has passed. Longer return times indicate greater distances between the ship and the ocean floor. The fan is narrow across-beam, which allows for detailed measurements, but wide along-beam (side-to-side), enabling surveys much wider than the ship itself.

Collecting millions of distance measurements allows for the construction of a submarine Digital Elevation Model (DEM). By comparing the new DEM from the Rainier with last year’s DEM from the Nautilus, it will be possible for volcanologists to see which parts of the submarine lava delta, if any, are subsiding. Comparisons of recent satellite images with 2018 lava flow maps have suggested that some of the new coastline has already retreated by tens of meters (yards), so similar changes might be expected below the waves.

Full processing and publication of the new dataset will take some time. However, while the Rainier was anchored offshore and the smaller boats surveyed Hilo Harbor with their own multibeam echosounders, several HVO staff were invited aboard the NOAA ship to see the preliminary Puna coast dataset. The results were exciting: a high-quality DEM allowed HVO’s volcanologists to spot various submarine features along the 2018 deltas, including a possible lava channel—now inactive, of course. Discussions with the ship’s crew identified several target areas for further bathymetric investigation, some of which the Rainier surveyed the next day.

HVO sincerely thanks the crew of the NOAA Ship Rainier for their assistance in ongoing volcanic research in Hawaii. We are just starting to unravel the data and interpret its implications for lava delta hazards, and this process will undoubtedly improve volcanologists’ understanding of the forces at work below sea level. Exciting collaborations like this allow HVO staff to work with experts in different scientific fields using state-of-the-art tools that often fall outside the scope of routine volcano monitoring.