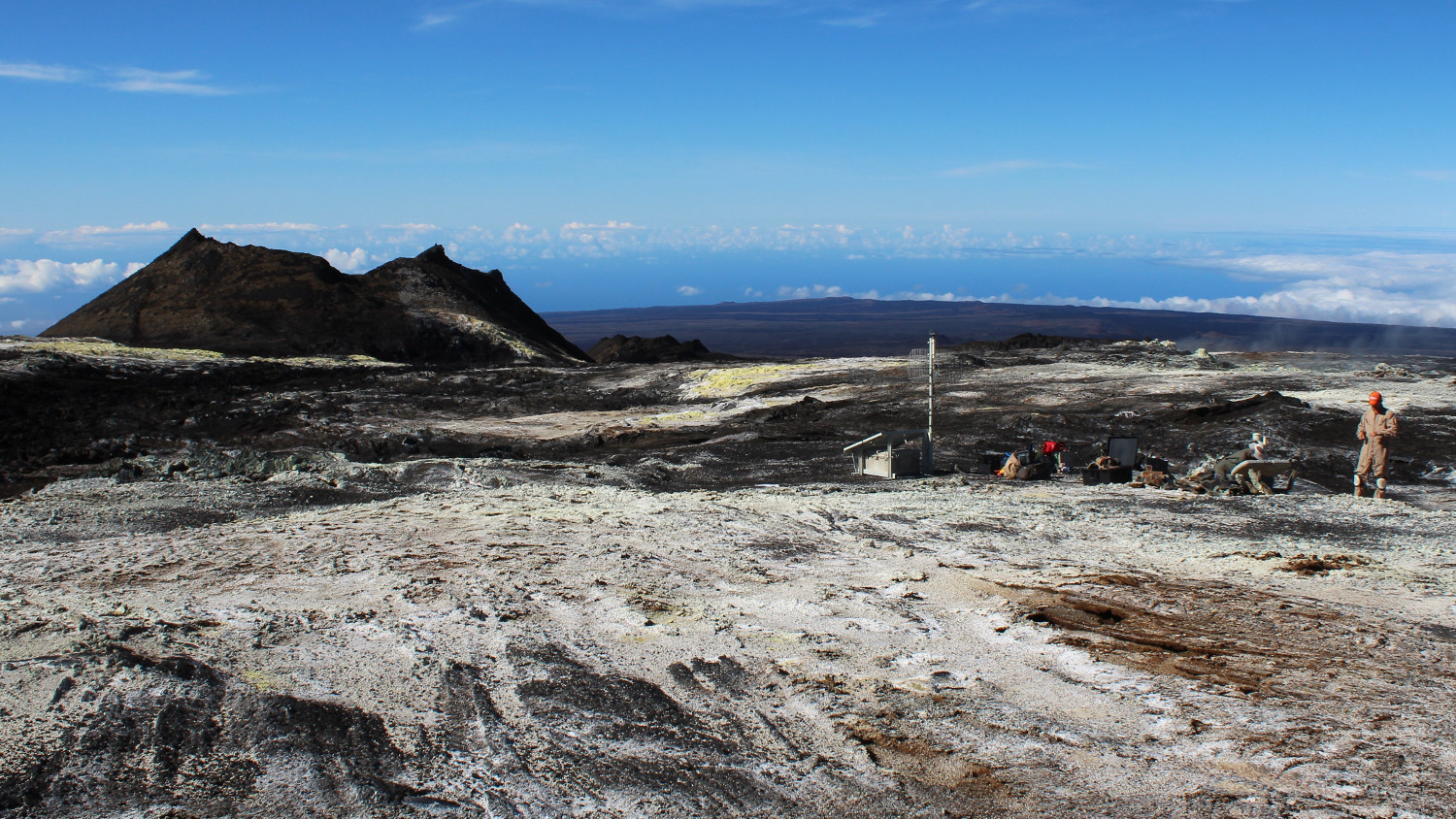 (BIVN) – Mauna Loa Volcano is not erupting. Although the current Volcano Alert Level is at ADVISORY/YELLOW, it does not mean that an eruption is imminent or that progression to an eruption is certain, scientists say.

The USGS Hawaiian Volcano Observatory continues to keep a close eye on Mauna Loa, reporting that “rates of deformation and seismicity have not changed significantly over the past week and remain above long-term background levels.”

HVO technician Frank Younger is the author of this week’s Volcano Watch article, in which he describes the process of maintaining the high altitude station on Mauna Loa. Younger writes:

U.S. Geological Survey trucks pull off the shoulder of Mauna Loa Observatory Road before dawn. I park the Jeep at the helicopter staging area, a flat rubble strip flanked by a’a lava. The air is cool and thin at 3,048 m (10,000 ft) altitude. Our field crew of six from Hawaiian Volcano Observatory (HVO) keep warm unloading gear. We clear the landing zone for the inbound pilot. We organize packs, tools and equipment by checklist for the helicopter.

Today’s flight plan will disperse us across Mokuʻāweoweo Caldera and the upper flank of the volcano to rebuild five remote Mauna Loa monitoring stations. Our team of technicians ensures the continuous transmission of seismic, deformation, and gas emission data from the active, but not currently erupting, volcano. Two geoscientists and I are heading to Sulphur Cone on the Southwest Rift Zone within the boundaries of Hawai‘i Volcanoes National Park .

The first light of day spreads over Hawai’i Island. The natural colors of Mauna Kea, Hualālai, and Kohala come alive in the warmth of the sun. Across the channel, the heights of Haleakalā rise above ocean clouds.

I hear beating chopper blades approaching. The helicopter lands in a roaring downdraft. We load cargo for Sulphur Cone, and I strap myself in next to the pilot. He throttles for takeoff, keys coordinates on the GPS, and pulls rotor pitch with his control. The helicopter lifts into the trade wind, banks westward, and nods into forward acceleration.

We navigate along the 10,000 ft (3,048 m) elevation contour of Mauna Loa, with an airborne perspective of the northwest flank. The long, jagged channel of the 1859 lava flow stretches 52 km (32 miles) down to the sea south of ʻAnaehoʻohalu Bay.

Crossing the west flank, we fly above an atmospheric inversion layer. Cloud-swept pāhoehoe cradles patches of hardy native Pukeawe shrub. We hurtle over the trackless wilderness at 110 knots (126 mph). The dark ridgeline of the Southwest Rift Zone dominates the horizon ahead.

The Sulphur Cone area stands out in bright contrast. It’s a steaming section of the 1950 eruptive fissure at 3,480 m (11,420 ft) elevation. We are dropped off upwind of fumaroles emitting volcanic gases. The fumes have created crystals including snow-white calcite and canary-yellow sulfur that cover the surroundings.

Our crew hikes over altered rock to monitoring equipment installed near an outgassing fissure. Station MG14_SCN clicks and whirrs beneath protective rocks.

We bring in a replacement MultiGAS to relieve the veteran station instrument. It is scheduled for preventative maintenance at HVO’s Keaʻau workshop, then redeployment to Mokuʻāweoweo Caldera.

My colleague hunts around with a thermometer. She locates a 95 deg C (203 deg F) fumarole and wires a station thermocouple to continuously measure near-surface temperature.

I tend the power station, cleaning solar panels. The wet rag comes away yellow with insoluble sulfur. The anemometer atop the mast gets a scrub, too. I inspect the welded frame and antenna grid for any deterioration beneath a fine coat of crystals.

Our team lead installs the new MultiGAS and communicates with it via laptop. She notes parameters and triggers a calibration cycle. We listen and test the plumbing of pumps and valves as they operate—all look and sound healthy. She swaps cylinders of calibration gases and replaces desiccant and scrubbing media. I check the tubing manifold connections and raise the sample intake pipe.

We initiate the program for automatic operation. The station will sample and analyze ambient volcanic gases around the clock. Now back online, the data are transmitted on HVO’s radio telemetry network.

Data flows down-rift, around the island, and onto HVO servers nearly instantly. The latency to the database is about 18 milliseconds.

I call HVO Hilo over satellite phone. Our flight follower verifies network connectivity and data quality. I get updates on the other crews’ status around the summit. The mission is running smoothly. Confident in our work, we request helicopter extraction.