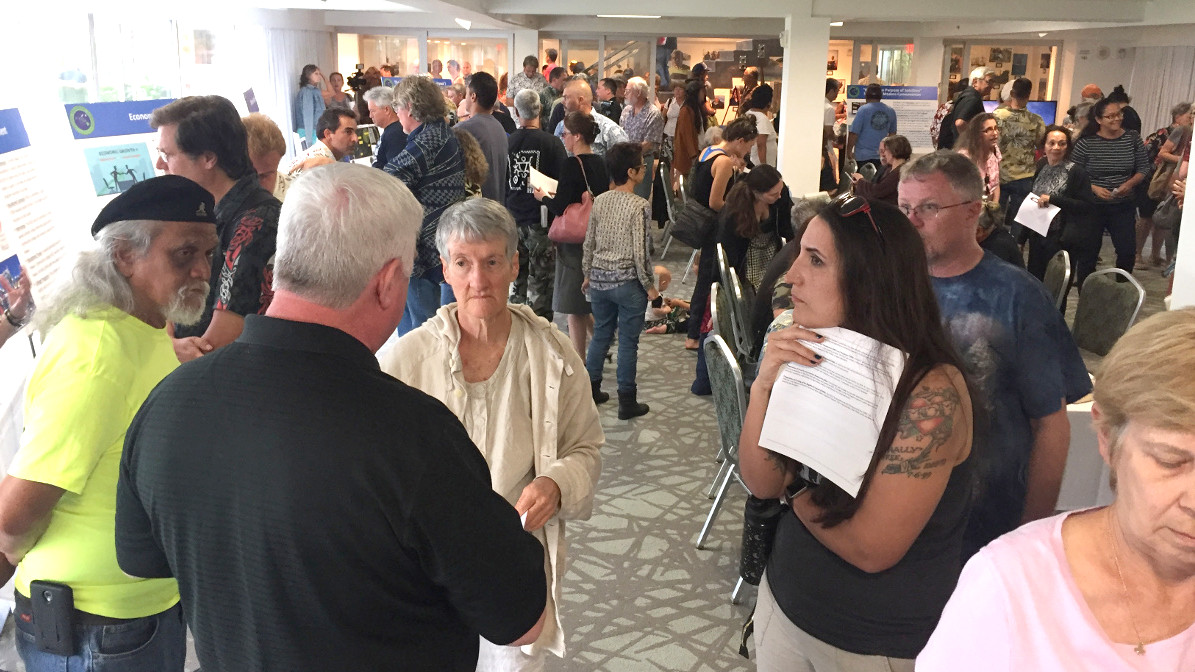 An informational meeting was held in Hilo back in February to introduce the public to the spaceport proposal. Image by David Corrigan

(BIVN) – Two Hawaiʻi County Councilmembers are reacting Thursday to news that W.H. Shipman, Ltd., the owner of land proposed as a location for a commercial spaceport, is pulling out of the plan.

The Hawaiʻi Tribune-Herald reported that the satellite launch facility near Keaʻau “will not go forward”, and that Shipman President Peggy Farias said the Pacific Spaceport Complex Hawaii proposed by the Alaska Aerospace Corp “wasn’t the right fit”.

Councilwoman Sue Lee Loy and councilwoman Ashley Kierkiewicz, who represent the Hilo and Puna districts, respectively, issued statements in response to the Shipman announcement. The two council districts would have been the closest to the project, had it been developed on the Shipman land between Haʻena Beach and Pāpaʻi Bay.

“We applaud W.H. Shipman Ltd. and their bold decision regarding their proposed launch facility in Kea‘au,” Lee Loy and Kierkiewicz said in a joint statement. “Their approach was thoughtful, meaningful, and considered the input of all sides, including their closest neighbors in Pana‘ewa and Puna. Their decision emphasizes that the collective success of our special community must be a priority rather than a disruptive, divisive project that results in marginal individual success.”

Many residents of the area surrounding the proposed launch facility objected to the idea. Those objections were voiced at community meetings, like the one held in February at the Grand Naniloa Hotel.

“I will continue to keep an open mind about the future and the types of industries that are conducive to our island,” said Kierkiewicz, individually. “It’s important to note that future projects should start at the grassroots level with plans that are adapted to community needs and driven by transparency.”

“I am inspired,” said Lee Loy. “This shows how a landowner can gather information and pass on a project that is not appropriate for an area. We look forward to the Shipman family and company bringing forward future proposed project that are a good fit for our island home.”