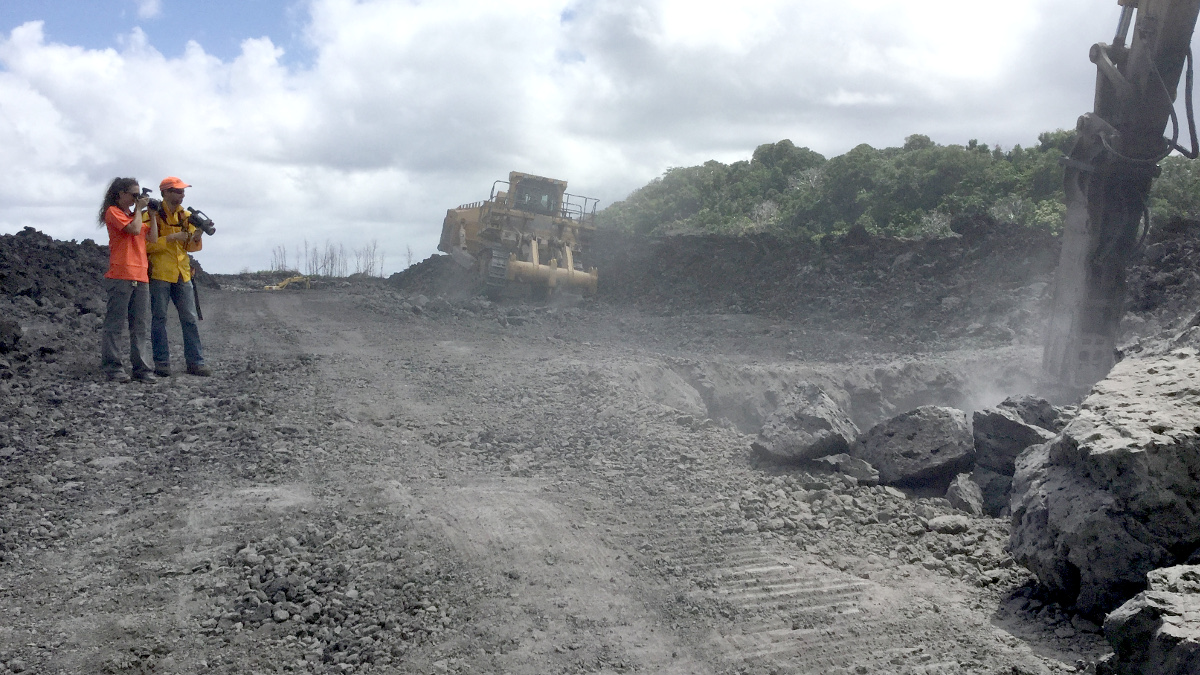 PUNA, Hawaiʻi - Lava insulates itself very well; temperatures of 425° C (800° F) have been measured along the newly-cut Highway 132, which was covered by lava over a year ago.

One of those hazards is heat. In this week’s Volcano Watch article, USGS Hawaiian Volcano Observatory geologist Carolyn Parcheta examines why the lava erupted in 2018 is still so hot.

As roads are recut into Kīlauea’s 2018 lava flow field, many have been surprised at how hot the lava remains under the surface, even though it is solidified. Why is it still so hot? The short and simple answer is that lava insulates itself very well.

Since last writing about this topic in a February 28, 2019, “Volcano Watch” article, we now have more accurate calculations of lava thickness, cooling times, and the relative proportions of the internal molten core to the exterior solid crust for Kīlauea’s 2018 lava flow field.

Previous work by Hawaiian Volcano Observatory (HVO) scientists published in 1994 measured the cooling rate of pāhoehoe lava at Kalapana. They found that the upper crust of a basalt lava flow grows thicker as a function of the square root of time. In other words, the lava flow crust grows more slowly with time. Therefore, thicker lava flows will take longer to become completely solid.

Therefore, although the top surface of Kīlauea’s 2018 lava flows are already solid and cool to the touch, just beneath the surface is still very hot.

Unmanned Aircraft System (UAS) mapping in 2018 helped HVO create a lava flow thickness map. This map indicates that at the intersection known as “Four Corners” there is approximately 15 m (50 ft) of lava. Using this value and the equations from the 1994 study of the Kalapana lava flows, we can calculate how much of the 2018 flows have solidified.

When construction of new roads in the area expose hot temperatures just below the surface, the lava cooling profile is effectively reset. The newly-exposed surface will quickly lose heat, as if it were the original cooling surface.

This matches recent observations by road-construction crews, who noticed hot rocks being exposed at a road cut along HWY 132. HVO geologists confirmed this in August, when temperatures of 425° C (800° F) were measured at the newly-cut road site. Hot temperatures will remain several feet below the surface for now and will likely generate steam when there is rain.

Lava retains heat so well that thick flows take years to decades to completely solidify, and even longer to cool off. The UAS lava-flow thickness map indicates that over Kapoho Bay, the flow is over 50 m (160 ft) thick. The maximum thickness of 250 m (820 ft) is located east of the bay in an area that was formerly offshore. At both locations, the solid crusts will be the same thickness as at “Four Corners”, but the viscoelastic layer will be 4.7 m (15 ft). A thick molten inner core should exist within the ‘a‘ā flow delta and have a thickness of 32 m (105 ft) in the bay and an astonishing 232 m (761 ft) at the eastern area of maximum thickness.

Although Kīlauea’s 2018 eruption ended 14 months ago, it will be years before the lava flows emplaced on land are entirely solidified below 850° C (1560° F), and over a century before the 250-m (820 ft)-thick area offshore fully solidifies.