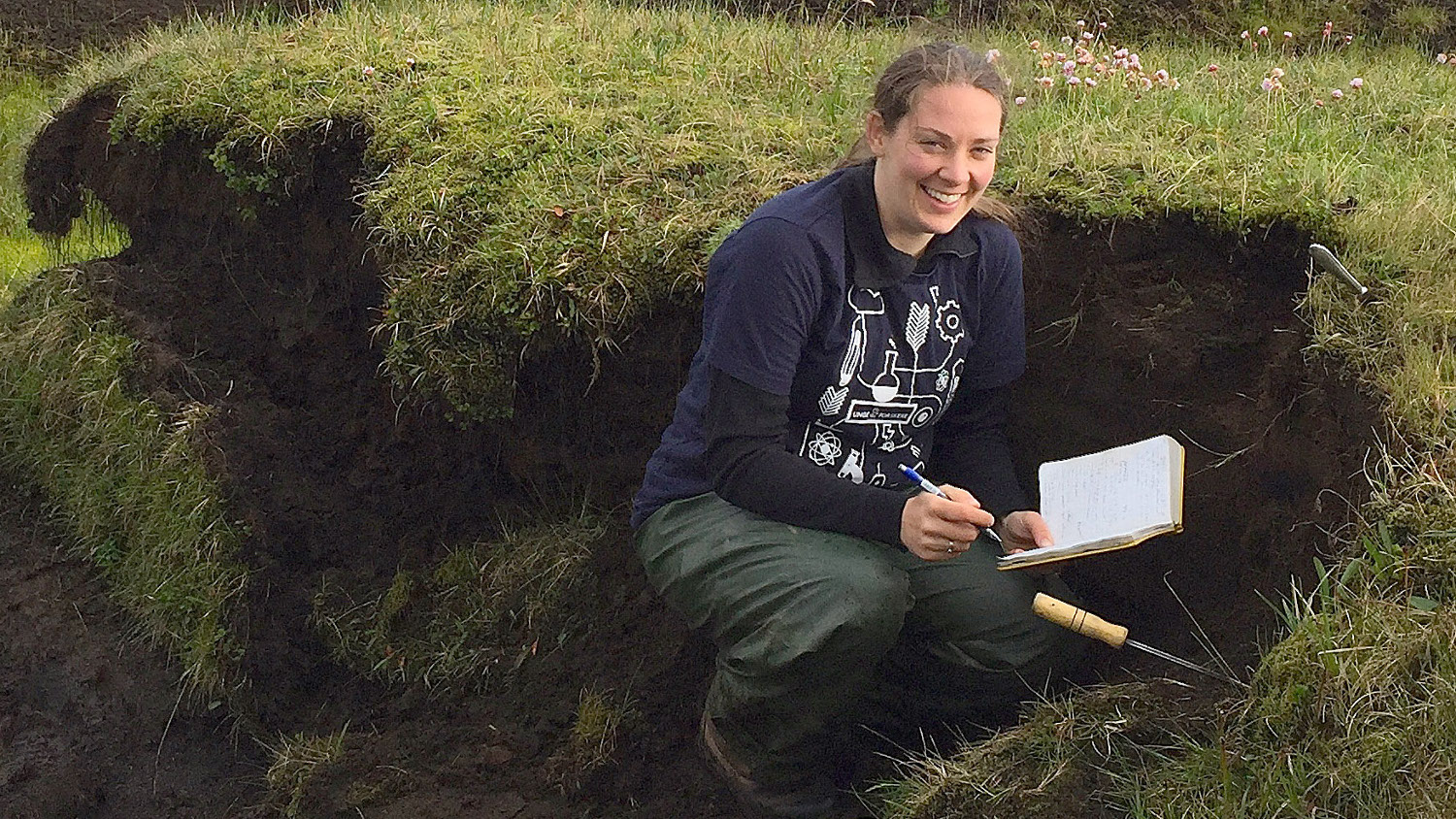 (BIVN) – Kīlauea is not erupting and its USGS alert level remains at NORMAL. The USGS Hawaiian Volcano Observatory continues to keep a close eye on the volcano. Scientists are watching the new crater lake at the bottom of Halema‘uma‘u slowly expand and deepen, and have been informing the public about what the new water feature may portend.

Kīlauea Volcano attracts researchers from all over the world. Dr. Johanne (Jo) Schmith joined the ranks of the US Geological Survey’s Hawaiian Volcano Observatory (HVO) in June to study some deposits of past Kīlauea explosions—a timely endeavor given the presence of water in the caldera today.

Jo is a physical volcanologist, field enthusiast, and true ash aficionado, but a career in volcanology was not an obvious choice for someone growing up in the rolling grasslands of Denmark. However, Jo has always enjoyed taking the path less traveled, and after watching scientists studying active volcanoes on TV, she knew she had to be one of them.

Jo went to the University of Copenhagen to pursue a Master’s degree in geoscience, with a double major in geology and geophysics during her undergrad years. Loving the outdoors, she participated in as much fieldwork as she could, and she joined a seismic survey team to work in Denmark, Ukraine, and Norway, progressing to manage field camps. These experiences gave her a solid background for carrying out fieldwork in environments spanning sunny cornfields to cold barren mountains north of the Arctic Circle while dealing with multiple cultures and languages, sleep deprivation, tight deadlines, equipment failure, and once a trip to a local police station to retrieve a seismometer that someone had mistaken for a bomb.

Unfortunately, there were no opportunities to study volcanology in Copenhagen, so Jo fundraised to go to the University of Hawaiʻi (UH) Hilo in 2006 for a semester of volcanology and volcano monitoring. Field trips to active lava flows taught her invaluable lessons about real-life volcanology, and Hawaii won a very special place in her heart.

Master’s research took Jo to the Cape Verde Islands in Africa. She was the first to map and sample the volcanological features of the island of Boa Vista, and she gained new field experience dealing with hot deserts, cobblestone highways, and transporting the occasional hitchhiking goat and owner between villages. She used chemical analysis of the volcanic rocks to search for their origin deep within the Earth’s mantle and made a melting model of the islands.

On her way to a vacation in Iceland in 2010, Jo flew past the first puffs of the Eyjafjallajökull ash cloud that made headlines around the world for closing European air space. The close personal encounter got her interested in volcanic ash. She won a Nordvulk Fellowship and moved to Iceland with her family to pursue a double PhD degree at the University of Iceland and University of Copenhagen in the physical volcanology of explosive eruptions.

Jo wanted to explain why two explosive eruptions from Katla volcano were unusually large. She conducted a field study, sampled the ash deposits from the eruptions, and started investigating the formation of the ash in the lab. Specifically, she developed a new systematic way to classify ash samples in terms of how much magma-water interaction had influenced the explosions that generated the ash. She showed that water interacted differently with the magma than previously thought and that the explosive potential of the Icelandic volcanoes is grossly underestimated.

Now Jo has joined forces with scientists at HVO and UH Mānoa to study the explosive past of Kīlauea Volcano represented by the Keanakākoʻi Tephra. She has been awarded a two-year postdoctoral fellowship from the Danish Carlsberg Foundation and will use her expertise to evaluate the role of water in explosions at Kīlauea’s summit.

Jo is mapping and sampling the thickest eruptive deposits to reconstruct the dynamics of the eruptions that produced them. These are particularly important and timely studies given the growing water pond in Halemaʻumaʻu. Her results will contribute to a more detailed understanding of hazards at Kīlauea’s summit.

Jo has also been a passionate presenter of earth science to the public, and she has been engaged in developing a new school-visiting service at the National Natural History Museum of Denmark and later at the UNESCO world heritage site Stevns Klint. She has worked with inquiry-based learning and talent development at the National Center for Learning in Science, Technology, and Health for the Ministry of Education and has a keen interest in promoting science literacy.

Welcome, Jo, to the HVO ohana!