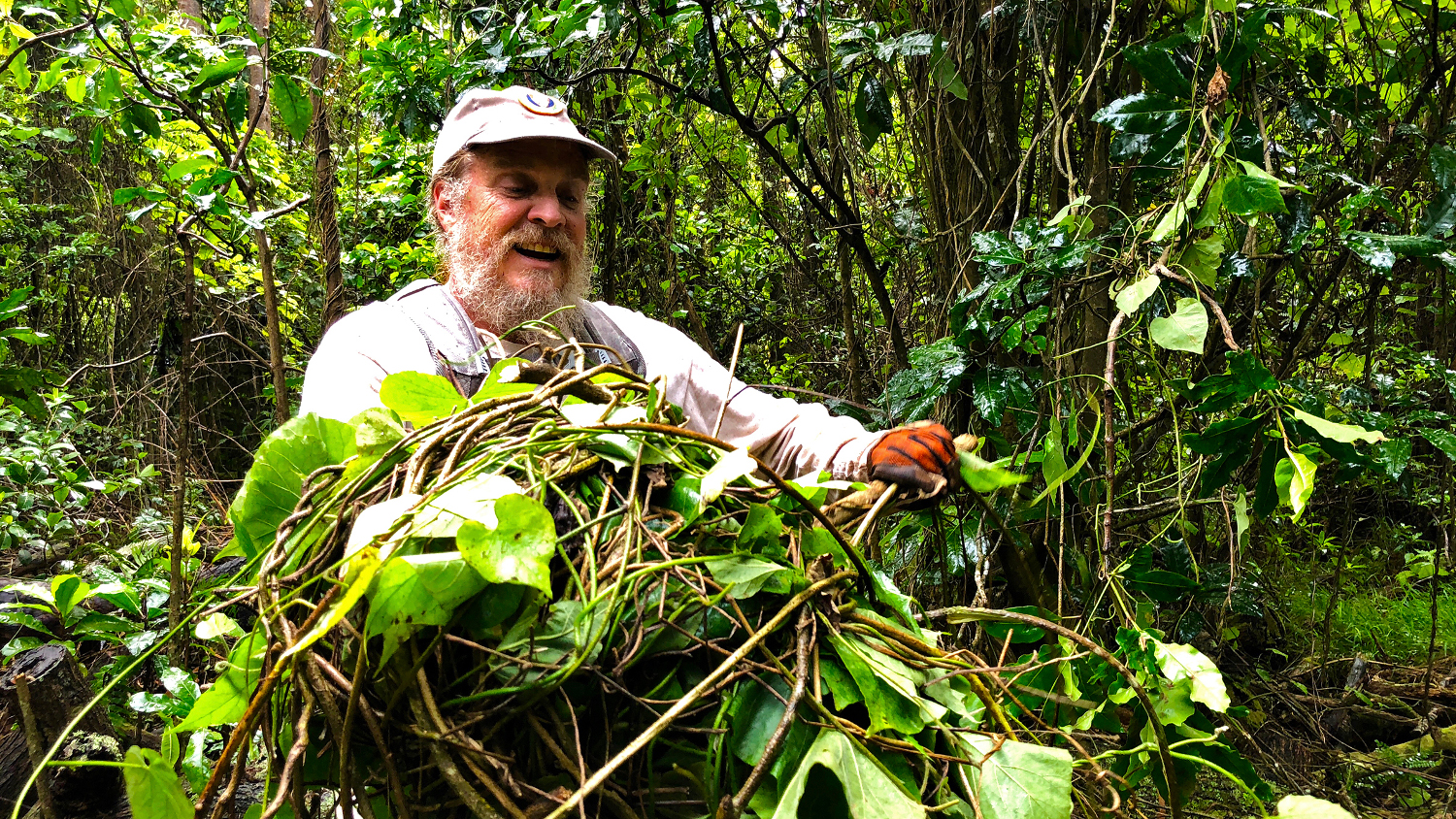 A volunteer help with stewardship of Kīpukapuaulu. (NPS Photo/Janice Wei)

HAWAIʻI VOLCANOES NATIONAL PARK - On Wednesday, the park and its non-profit partners hosted a lunch and appreciation party for the volunteers, who have contributed 27,568 volunteer hours over the last year. 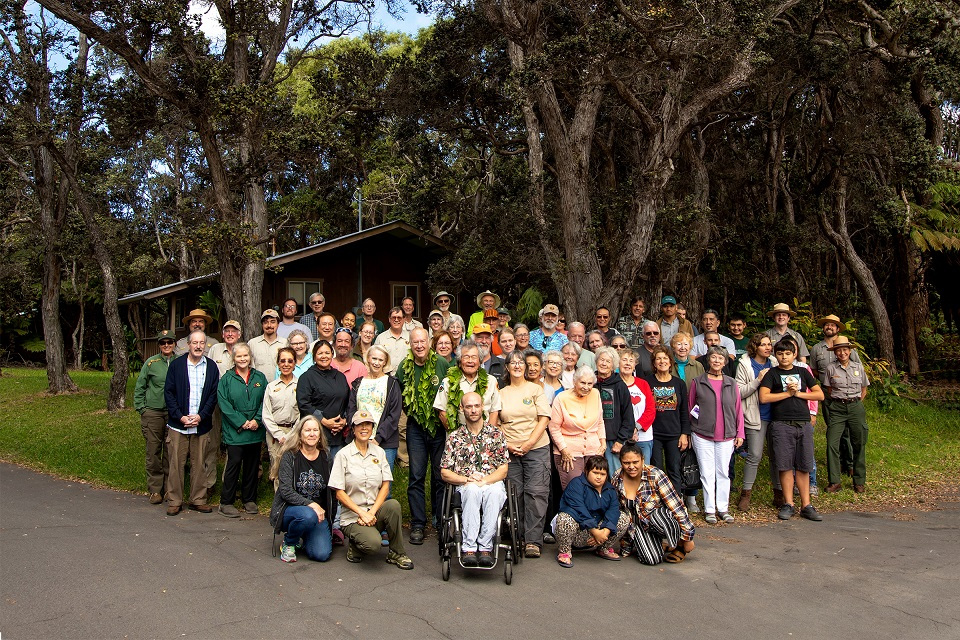 (BIVN) – The National Park Service today celebrated the many volunteers who have contributed their time and work at Hawaiʻi Volcanoes National Park over the last year. Park officials shared this media release:

Hawai‘i Volcanoes National Park would have a tough time fulfilling its mission if it wasn’t for the efforts from its corps of dedicated volunteers.

Last year, 651 park volunteers contributed 27,568 hours of their time helping the park in various ways. They worked in museum collections and archives, led hikes and answered countless visitor questions, monitored the backcountry, restored native forest, maintained trails, helped save native animals like honu‘ea (hawksbill turtles) and other endangered species, and so much more. Their invaluable effort is equal to 13.25 full-time equivalent employees working 40 hours a week, or $701,000.

On Wednesday, the park and its non-profit partners, the Friends of Hawai‘i Volcanoes National Park and Hawai‘i Pacific Parks Association, hosted a lunch and appreciation party for the volunteers. Volunteer coordinator Kūpono McDaniel told volunteers that the park could not fulfill its mission without their invaluable efforts.

“On behalf of the entire park, we are deeply humbled by all that you do,” McDaniel said. “When more than 600 people are willing to do my job for free, I am reminded how powerful and far-reaching our work really is. Volunteers are the true philanthropists, the people who give their most valuable commodity, their time, to ensure our parks are here for the next generation,” he said.

The mission of Hawai‘i Volcanoes National Park is to protect, conserve, and study the volcanic landscapes and associated natural and cultural resources and processes, and to facilitate safe public access to active volcanism, diverse geographic settings, and wilderness for public education and enjoyment. 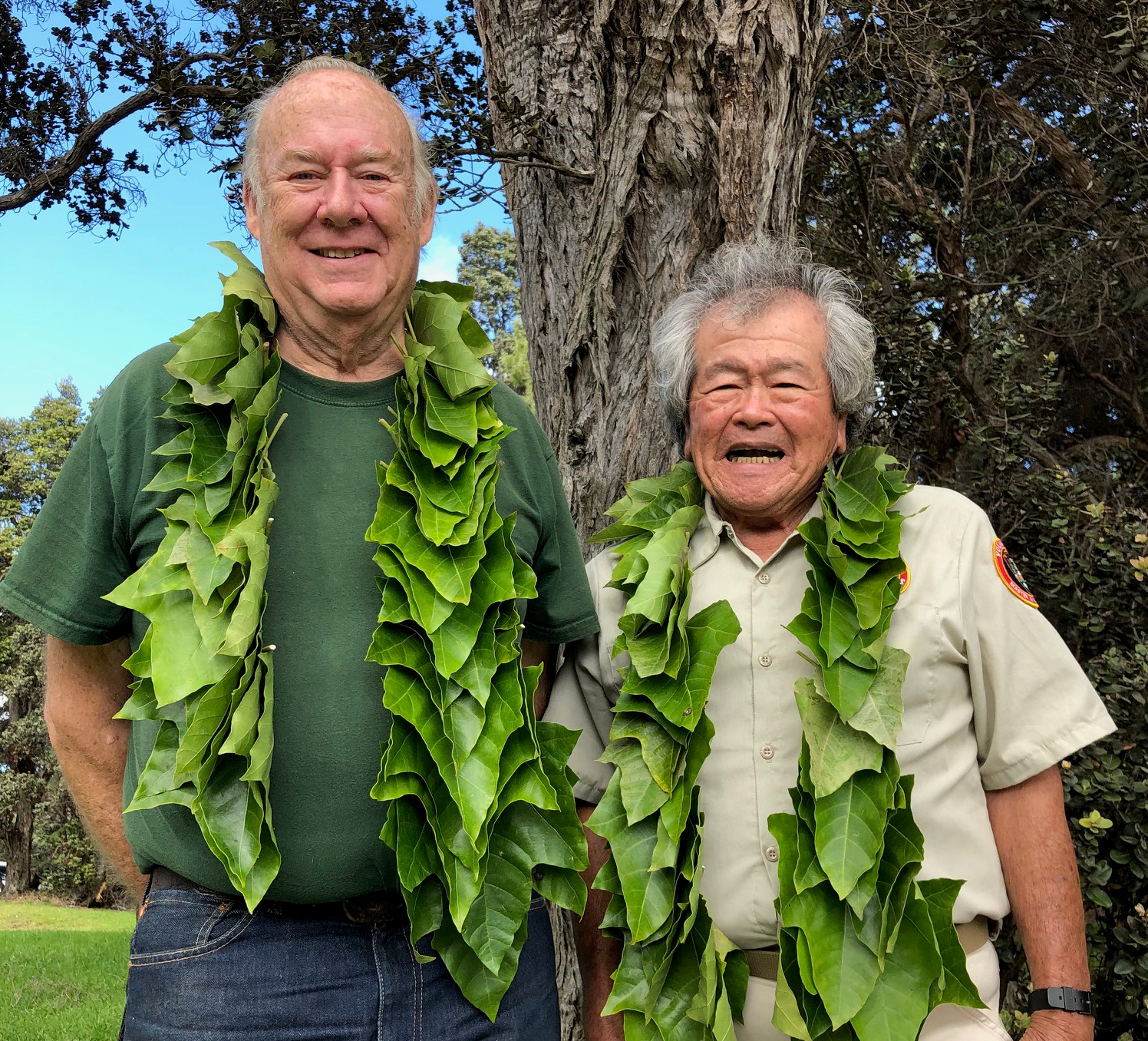 NPS Master Volunteers George Jensen (left) and Ed Shiinoki were honored with kukui leaf lei for dedicating more than 15,000 hours of their time as volunteers with Hawai‘i Volcanoes National Park. Jensen has 17,598 hours, and Shiinoki has 15,940 hours. (NPS Photo/J.Ferracane.)