HILO, Hawaiʻi - The property owners want to rezone the current Open zoning designation to an Industrial-Commercial Mixed Use, in order to maintain the existing uses and structures at the site. 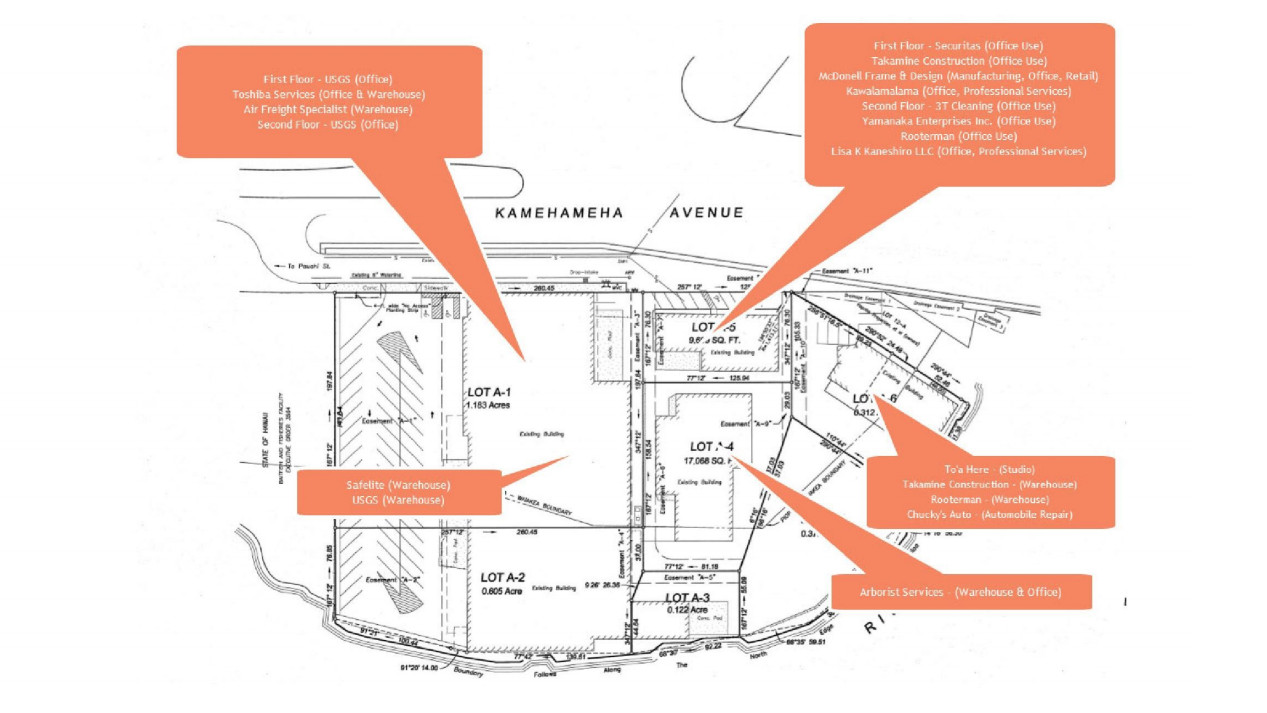 from the environmental report

(BIVN) – Owners of a Hilo landmark are looking to rezone their property, and they have the support of the Banyan Drive Hawaiʻi Redevelopment Agency.

On the agency’s February 26th agenda was the review of a proposal by Garth Yamanaka to rezone the Hilo Iron Works properties from the current Open zoning designation to an Industrial-Commercial Mixed Use (or MCX) zoning designation “in order to maintain the existing uses and structures” at the Piʻopiʻo location.

The 3.29-acre area and is located along Bayfront Highway and abuts the Wailoa Recreational State Park. The 69,270 sq. ft. of office and warehouse space is home to 15 tenants and 95 employees that are based at the site, the documents say. It is situated at the entrance of the Waiakea Peninsula and the Banyan Drive resort area, which is under the BDHRA purview.

The current land use of the property dates back to the 1960 tsunami. According to an environmental report prepared for the rezone application:

The Amended Urban Renewal Plan ( URP) outlined permitted uses of the Hilo Iron Works site in the aftermath of the 1960 tsunami that devastated the Kaiako’ s area. The “Limited Industrial” uses permitted under the URP and subsequently expanded in the Hawaii Redevelopment Agency’s Declaratory Order dated December 12, 1988) were intended as “interim” uses for a term of 35 years, or until such time that adequate control measures could be implemented to mitigate the effects of future tsunami. No mitigation infrastructure has been put into place and the 35-year term of the URP has expired. Upon the expiration of the URP, the permitted uses for Hilo Iron Works has reverted to those of the property’ current OPEN zoning designation. While HCC 25- 5- 162, which lists the permitted uses for the OPEN zoning district, does not reflect the current uses occupying the Hilo Iron Works site, the Zoning Code does conditionally permit nonconforming uses under HCC 25- 1- 5 and 25-4- 61(a).

“To reiterate, no significant improvements are being contemplated in tandem with this rezoning application,” the report stated. “The rezoning is merely designed to allow for conforming use of the existing structure. Should there be improvements to the site other than to the interior of the existing structure, the appropriate SMA Assessment will be submitted for review.”

“Here you have a private landowner who has a designation of open zoning,” said BDHRA member Brian DeLima. “Mr. Yamanaka kind of indicated all the problems they’re having in terms of being able to improve their structures, so it becomes an eyesore to the community. It limits the landowners’ ability to be creative in the use of the property. If this land is rezoned, the property owner could actually come up with a plan on how to make that more attractive for use. It could be a good place for restaurants, good place for walking paths, good place for retail. There could be some light industrial in that particular area that would make sense.”

DeLima noted that the same thing should apply to the ice house next to the Liliʻuokalani Park and Gardens. “It is a ugly eyesore right now because the landlord can’t do anything with it,” DeLima said. “If we gave him a reasonable use he could improve the property so it could complement the idea of the area near the park.”

The BDHRA voted to furnish a letter of support for the property rezoning.