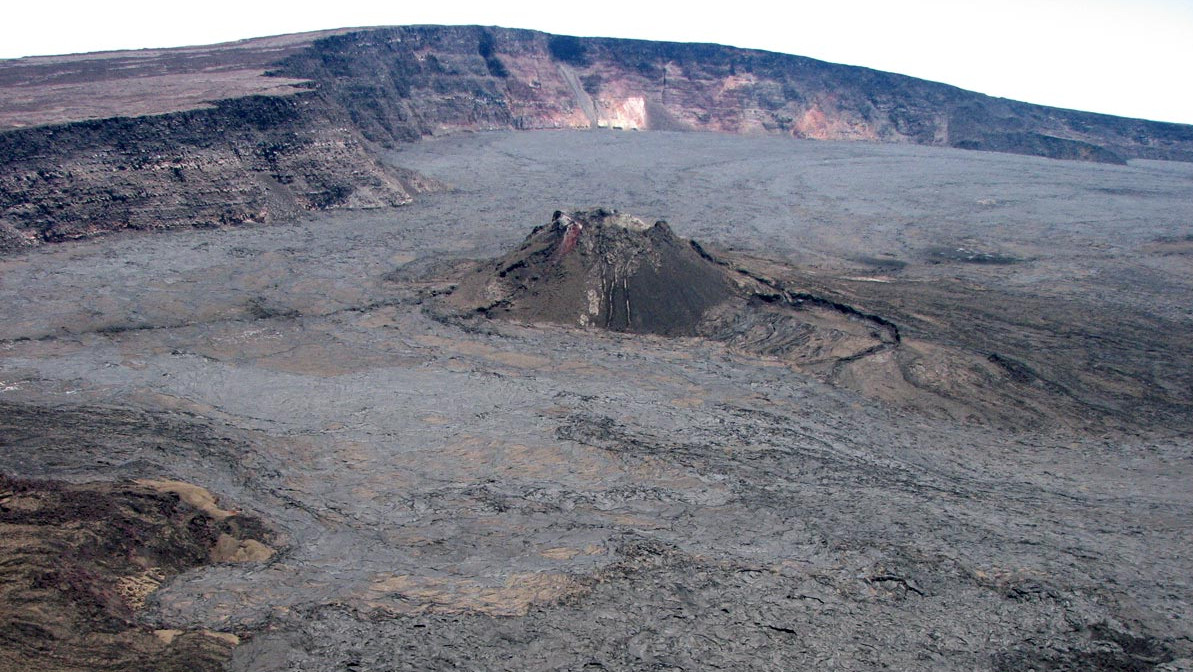 An aerial view of the prominent 1940 cinder-and-spatter cone on the floor of Mauna Loa's summit caldera. The cone, about 100 m (330 ft) high, was built during a 134-day-long eruption that began on April 7, 1940. Most of the caldera floor around the cone is covered by lava flows erupted in 1984. USGS photo.

HAWAIʻI ISLAND - The USGS Hawaiian Volcano Observatory is keeping a close watch on the volcano, and in this week's article, reflects on past eruptions that have occurred in the month of April. 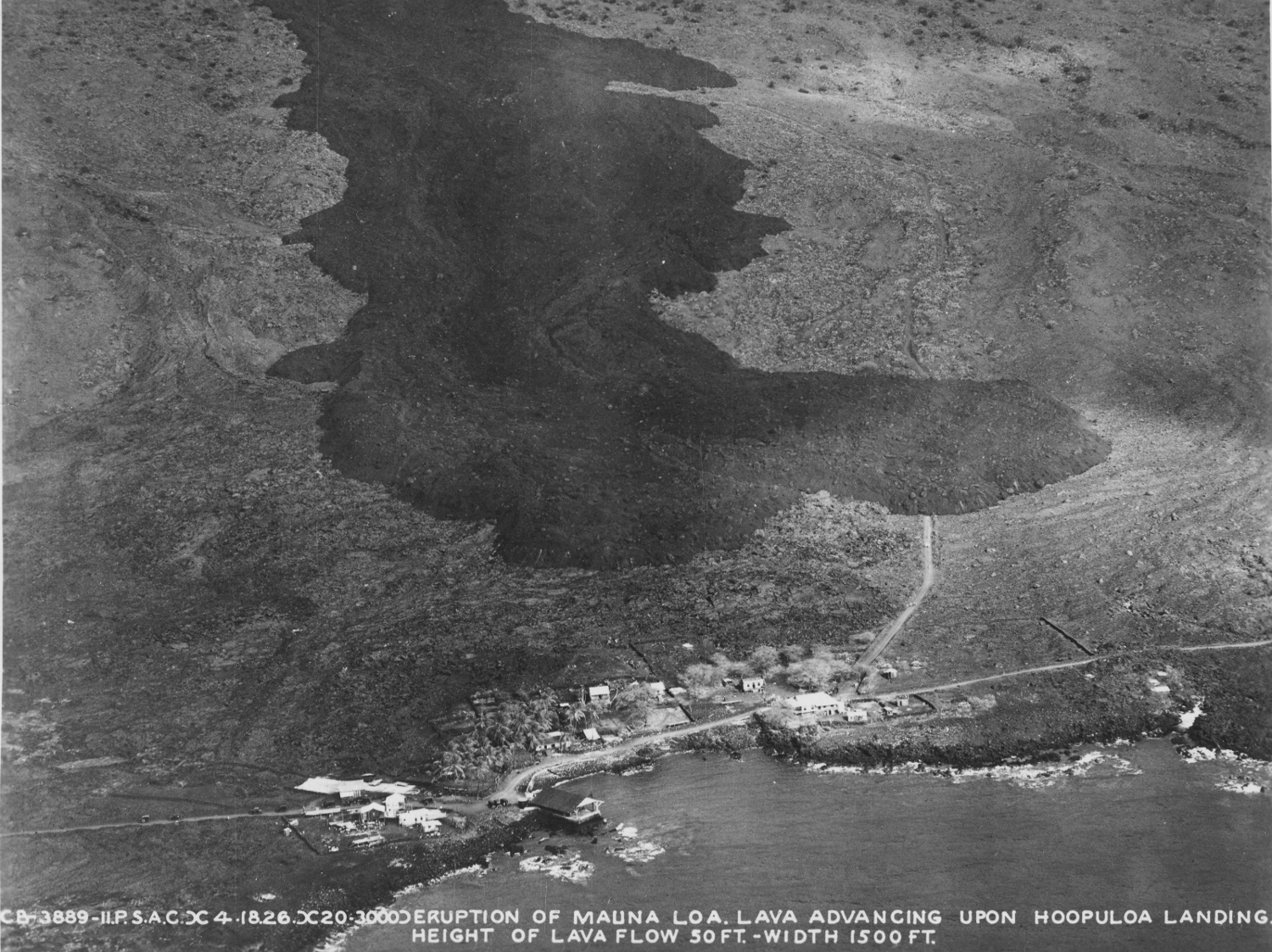 During the 1926 Mauna Loa eruption, an ʻaʻā flow about 457 m (1500 ft) wide and 9 m (30 ft) high headed straight for the village of Ho‘ōpūloa on April 18, as shown here. By the next day, the lava flow had destroyed a dozen houses, a church, and the wharf, and had nearly obliterated the bay. Photo by Army Air Corps, 11th Photo Section.

(BIVN) – Mauna Loa Volcano is not erupting. Rates of deformation and seismicity have not changed significantly over the past week and remain above long-term background levels, scientists say, and the alert level for the volcano remains at ADVISORY.

In this week’s Volcano Watch article, written by U.S. Geological Survey Hawaiian Volcano Observatory scientists and affiliates, the authors looks to the past to better understand future Mauna Loa eruptions.

Mauna Loa, the largest active volcano on Earth, has erupted, on average, every 5–6 years during the past 3,000 years.

Mauna Loa will erupt again. Although an eruption is not imminent, the USGS Hawaiian Volcano Observatory (HVO) keeps a close watch on the volcano.

With volcanic eruptions and other geologic events, the past is the key to the future. So, to understand what might happen during the next Mauna Loa eruption, HVO looks to the past.

Given what we know about past Mauna Loa eruptions, we expect that the next one will begin at the summit of the volcano. Unfortunately, it’s not possible to know if the next eruption will stay at the summit, if it will migrate down one of the rift zones, or if it will result in a radial vent eruption. That will only be revealed as the eruption progresses and we are able to track the movement of magma within Mauna Loa.

To learn from the past, we look back at this month in history—Mauna Loa eruptions that occurred in April.

In 1942, Mauna Loa’s “secret” eruption began on April 26. With World War II underway, news blackouts were imposed on Hawaii. American officials feared that if the eruption was publicized, Japanese military could use the bright glow of lava at night to guide warplanes to the islands. The eruption began on the western rim of Mauna Loa’s summit caldera but then migrated down the volcano’s Northeast Rift Zone. By the time it ended on May 9, lava had reached within 11 km (6.8 mi) of upper Waiakea Uka.

Mauna Loa’s third longest summit eruption in recorded history began on April 7, 1940. Lava fountains 20–60 m (65–200 ft) high initially erupted along a line of fissures extending from near the center of Mauna Loa’s summit caldera to an area down the volcano’s southwest flank. By the next evening, the eruption, which lasted 134 days, was restricted to the southwestern part of the caldera. There, active vents built a 100-m (330-ft) high cinder-and-spatter cone, which remains a prominent landmark on the caldera floor today.

On April 10, 1926, an eruption began at the summit of Mauna Loa, but fissures soon migrated 5 km (3 mi) down the volcano’s Southwest Rift Zone. Three days later, the eruption migrated farther down the rift zone, with three main vents between 8,000 and 7,400 feet (2440–2255 m) elevation sending massive ‘a’ā flows downslope. The main flow rapidly advanced toward the sea, where it destroyed the small village and harbor at Ho`ōpūloa on April 18. This short-lived, but destructive, eruption ended on April 26.

We encourage all island residents to stay informed about Mauna Loa. Like us, the more you know about the volcano’s past, the better you can prepare for future eruptions.