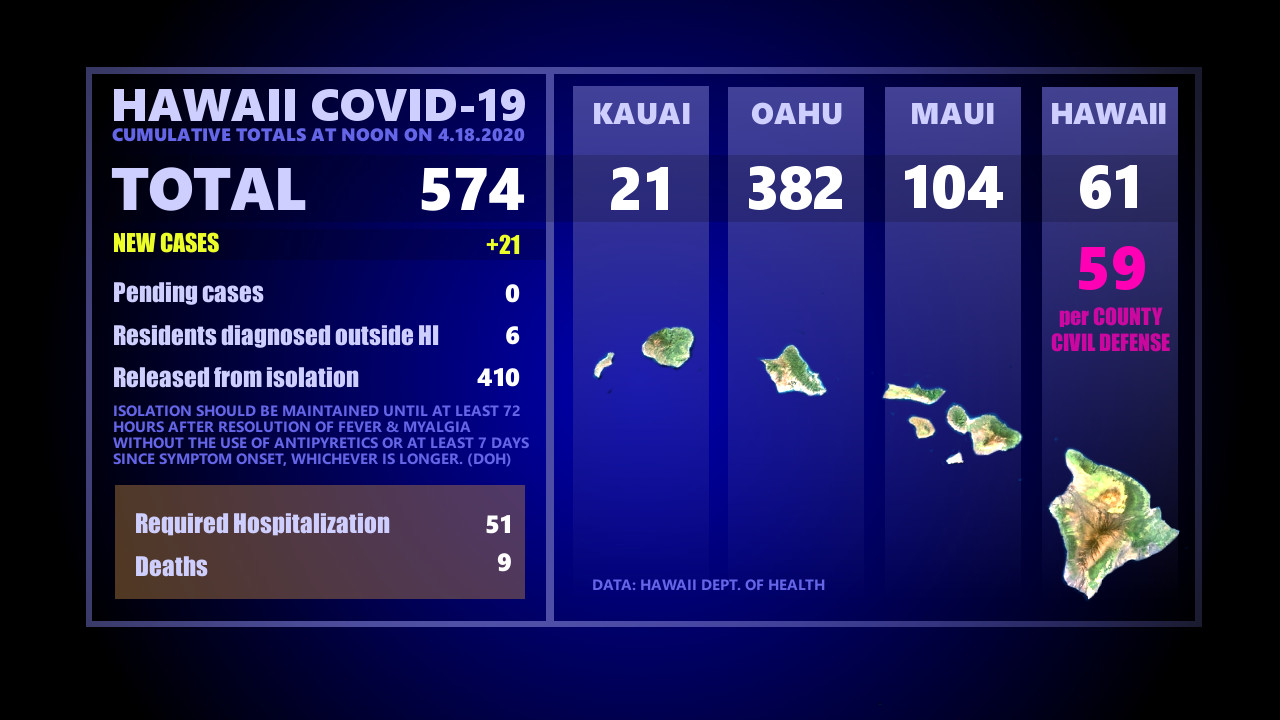 HAWAIʻI ISLAND - The state says the 29 confirmed cases associated with the cluster among the two McDonald's restaurants in Kailua-Kona includes a total of 17 employees and 12 household members. 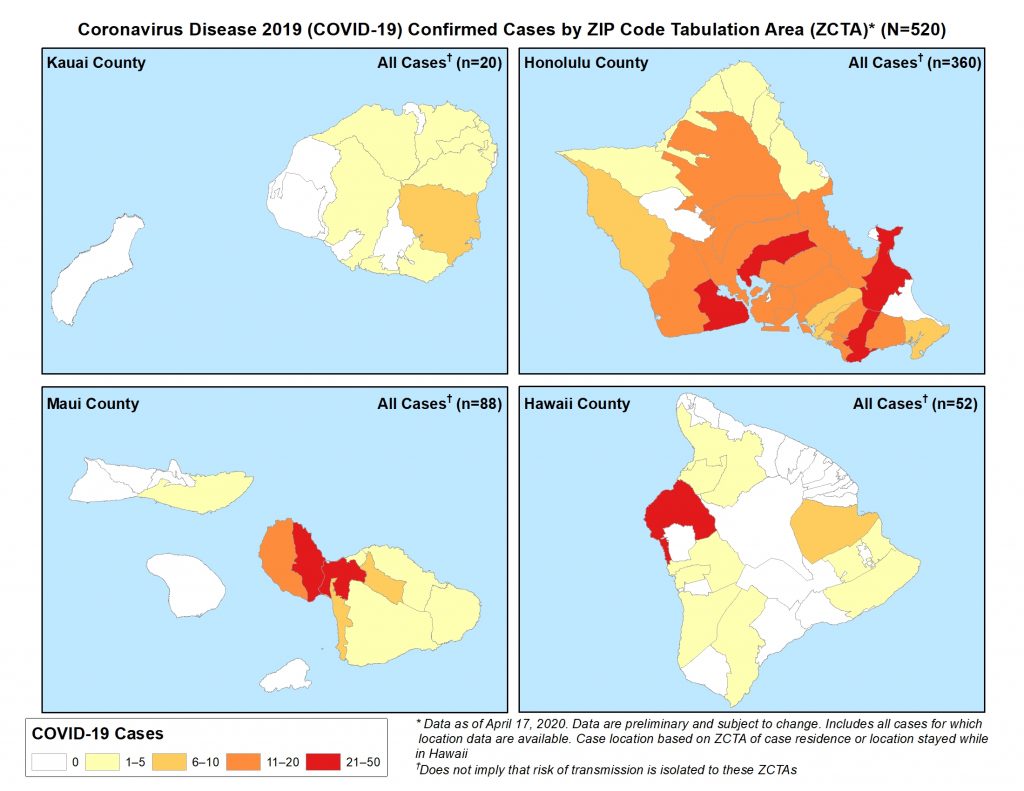 (BIVN) – The State of Hawaiʻi on Saturday identified 21 new positive cases of COVID-19 statewide. “Most of those cases were from Hawai‘i County – where there was a cluster of COVID-19 cases among the McDonald’s restaurants in Kailua-Kona,” the Department of Health reported. “There are also new cases on O‘ahu and Maui.”

The Hawaiʻi County Civil Defense message issued on Saturday morning contained a surprising report of a drastic increase in the number of cases reported on the Big Island. By the county’s count (which differs a little from the state’s numbers) the cumulative cases jumped from 42 to 59, and were mostly associated with the Kona McDonald’s cluster that continues to be investigated.

The state says the total number of COVID-19 cases on Hawaiʻi island is 61, of which 33 have been released from isolation.

The Department of Health reports there have been a total of 29 confirmed cases associated with the cluster among the two McDonald’s restaurants in Kailua-Kona that now includes a total of 17 employees and 12 household members. DOH is conducting contact tracing for new cases and continuing to monitor employees and family members, all of whom are in isolation or quarantine. Both restaurants (at Kona Commons and at Walmart in Kailua-Kona) remain closed.

It is critical that the community continues to be vigilant with practicing social distancing policies and preventive measures such as staying at home when sick, avoiding others that are sick, washing hands, sneezing and coughing etiquette and wearing a cloth face mask per Governor Ige’s fifth supplemental proclamation. 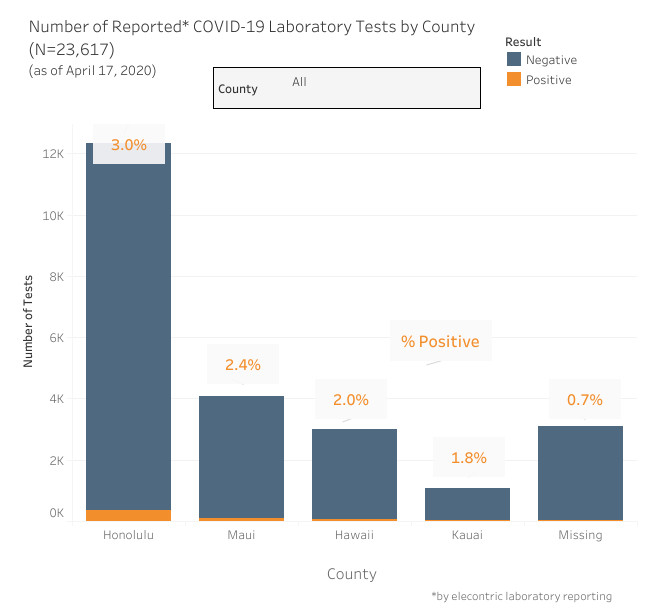 Yesterday, 486 people arrived in Hawaii including 98 visitors and 184 residents. During this same time last year, nearly 30,000 passengers arrived in Hawaii daily, including residents and visitors. The state’s mandatory 14-day self-quarantine started on March 26th for all passengers arriving in Hawaii from out of state. The quarantine order was expanded on April 1st to include interisland travelers. This table shows the number of people who arrived by air from out of state yesterday and does not include interisland travel.

To assist in reducing the spread of COVID-19 and to ensure the safety of the Hawai‘i Paroling Authority (HPA) staff and those who visit HPA’s offices statewide, the following safety protocols have been put into place: Entry into HPA offices will be by appointment only and will only be scheduled for essential issues that must be done in person. Those tentatively approved for appointment will be subject to on-site health screenings and will need to wear masks. Lastly, visitors will be escorted by HPA staff and be required to remain in the conference room for the duration of the visit. Anyone who doesn’t comply with the protocols will be denied access.

From March 2 to Apr. 17 there was a 619-person decrease in Hawai‘i’s jail population. This is due to the efforts by the State Judiciary, county police departments, and PSD’s Intake Service Division as they work to limit the number of people requiring admittance into the jails.

The Department of Public Safety is following the petition from the Office of the Public Defender (OPD) to the Hawai‘i Supreme Court requesting release of certain inmates due to concerns of possible spread of COVID-19 to the prisons and jails. On Wednesday, Apr. 15, the Supreme Court issued an interim order, requesting a list of select probation and pre-trial inmates for court-considered release which will have to be turned in by Apr. 20. From there, prosecutors will have three days to submit motions to object, then the courts will determine by Apr. 28 who may be considered for release.

Inmates in the sewing program are sewing thousands of cloth face coverings for Public Safety Department staff, inmates and other state agencies as a way to prevent COVID-19 from spreading, and to give back something to the community. This sewing project began on Apr. 1 at the Waiawa Correctional Facility (WCF) and Kulani Correctional Facility (KCF), with the assistance of the Hawai‘i Correctional Industries (HCI) which supplied the fabric, sewing supplies and sewing machines for the inmates. The program expanded on Wednesday and now includes a work line at the Hawai‘i Community Correctional Center (HCCC). Work lines that were sewing 600-700 masks a day last week are now producing 2,000 masks per day. By Apr. 30, HCI expects to manufacture as many as 6,000 masks a day. The masks are being rolled out to divisions within the Public Safety Department, then will eventually go to other state agencies and the general public.

Judiciary Postpones Trials Until End of May

From the Hawaiʻi State Judiciary:

The Hawai‘i State Judiciary has postponed trials in civil, criminal, and family courts until May 29, 2020 or whenever Gov. Ige’s state of emergency ends – whichever is sooner. That’s at the order of Chief Justice Mark E. Recktenwald. He also ordered the formation of the Committee on Operational Solutions, a group formed to accelerate the courts’ capabilities to conduct court proceedings remotely during the COVID-19 crisis. Chief Justice Recktenwald said, “While our community has responded well to stay-at-home orders and the results of these public health measures have been encouraging, the Judiciary must continue to do our part to protect the health and safety of our court personnel and court users. However, we recognize the importance of addressing as many cases as possible, either by teleconferencing or videoconferencing, as appropriate. We formed the Committee on Operational Solutions in order to devote resources to significantly increasing the Judiciary’s technological capabilities in a swift and systematic fashion.”