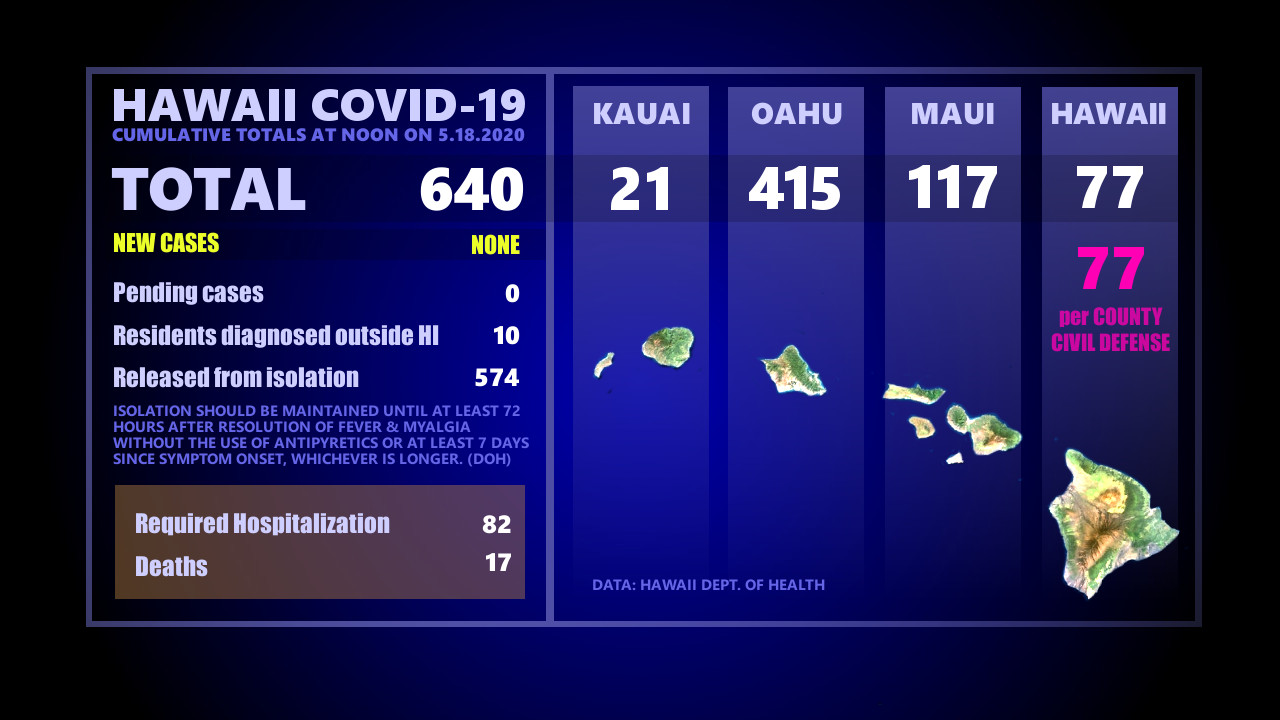 Hawaii COVID-19 Updates for May 18: New No Cases Statewide

HAWAIʻI - The total number of cases on Hawaiʻi island remains at 77, according to both the County and the State of Hawaiʻi. Only two of those cases are considered active.

(BIVN) – There were no newly identified cases of COVID-19 in the entire State of Hawaiʻi as of noon on Monday, health officials report, which means the cumulative total number of cases remains at 640.

The total number of cases on Hawaiʻi island also remained the same: 77, with 75 of those cases released from isolation. Only two cases are considered active.

Both the County of Hawaiʻi and the State of Hawaiʻi were in agreement
today as to the number of cases on the Big Island.

UPDATE – Governor David Ige signed his 8th Supplementary Proclamation today, saying the move “was made possible by the flattening of the COVID-19 infection curve due to good social-distancing practices, and other measures taken by the community to help protect our most vulnerable.”

The governor held a news conference on Oʻahu, where he gave a detailed presentation on how the State plans to reopen the Hawaiʻi economy, starting with the next phase on the timeline: the “Act with Care” phase, or Kamaʻāina Economy phase.

UPDATE – The County of Hawai‘i announced on Monday that it will reopen its beach parks islandwide as soon as the Governor gives his approval.

Yesterday, 1073 people arrived in Hawaii. During this same time last year, nearly 30,000 passengers arrived in Hawaii daily, including residents and visitors. The state’s mandatory 14-day self-quarantine started on March 26th for all passengers arriving in Hawaii from out of state. The quarantine order was expanded on April 1st to include interisland travelers. This table shows the number of people who arrived by air from out of state yesterday and does not include interisland travel. This data was collected from the Hawaii Department of Transportation’s (DOT) new Mandatory Travel Declaration Form.