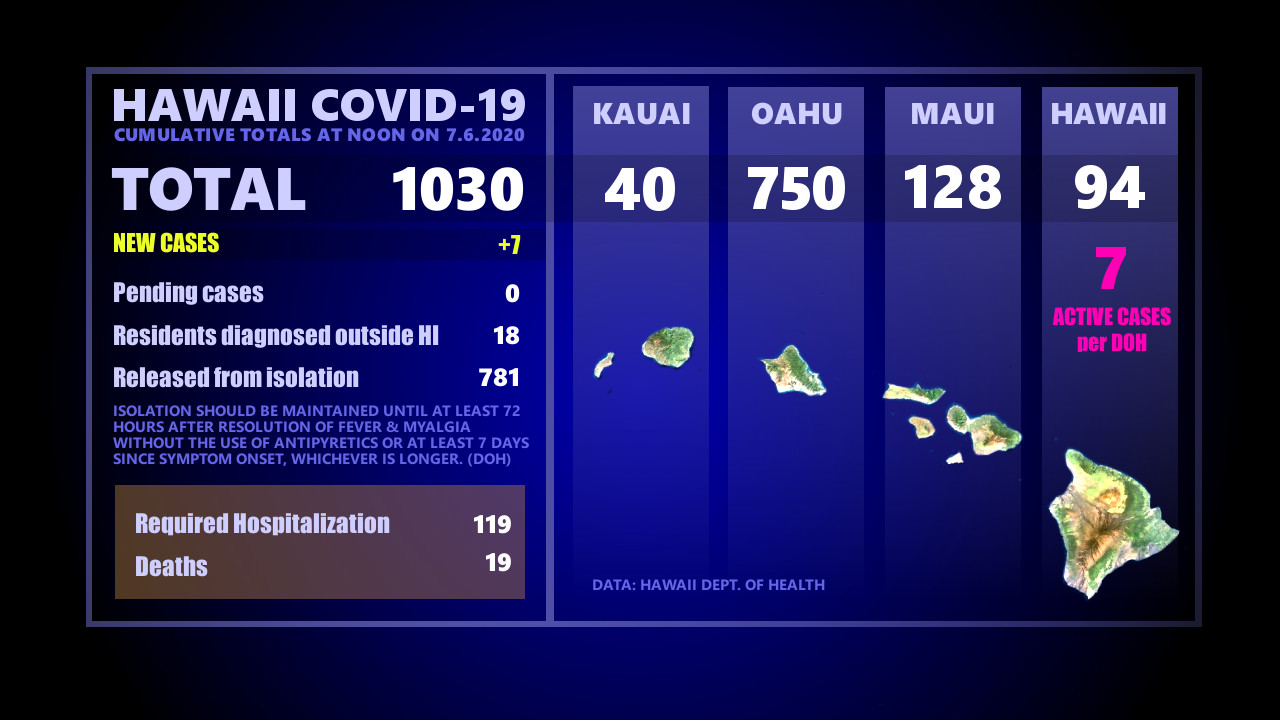 HAWAIʻI - One new case of COVID-19 was reported on Hawaiʻi island at noon on Monday, part of the 7 new cases reported statewide.

Video by Governor David Ige, livestreamed to Facebook on July 6, 2020.

(BIVN) – Seven (7) new cases of COVID-19 were reported in the State of Hawaiʻi at noon on Monday, according to a health department update, and one (1) of those new cases was identified on Hawaiʻi island.

There remains seven (7) active cases of COVID-19 on the Big Island, with 87 of the 94 cumulative cases released from isolation. The Hawaiʻi County Civil Defense reported six (6) active cases in its morning message, which was issued hours before the noon update from the Hawaiʻi Department of Health.

The majority of states in our country continue to see an increase of people being infected by the Coronavirus. Hawaii Island remains in a good place and know how important it is for everyone to continue, and even get better, in following the preventive policies of face coverings, distancing, gatherings, and cleanliness. This is a community issue and your help is needed to keep Hawaii safe. Wear your face coverings to keep you and others safe.

The County Task Force on prevention remains available, so do call Civil Defense if help is needed. The County’s Task Force on disinfection also continues its seven day-a-week schedule.

Governor David Ige will hold a news conference at 2:30 p.m. HST today to provide an “update on Hawaiʻi’s finances”. The event, which will be livestreamed on the governor’s Facebook page, will also include Lt. Governor Josh Green, and Hawaiʻi health department director Dr. Bruce Anderson.

Sunday saw another day of air passenger arrivals to Hawaiʻi totaling over 2,000. From the Hawaiʻi Tourism Authority:

Yesterday, 2,066 people arrived in Hawaii. During this same time last year approximately 35,000 passengers arrived in Hawaii daily, including residents and visitors. The state’s mandatory 14-day self-quarantine started on March 26th for all passengers arriving in Hawaii from out of state. This table shows the number of people who arrived by air from out of state yesterday and does not include interisland travel. This data was collected from the Hawaii Department of Transportation’s (DOT) Mandatory Travel Declaration Form.