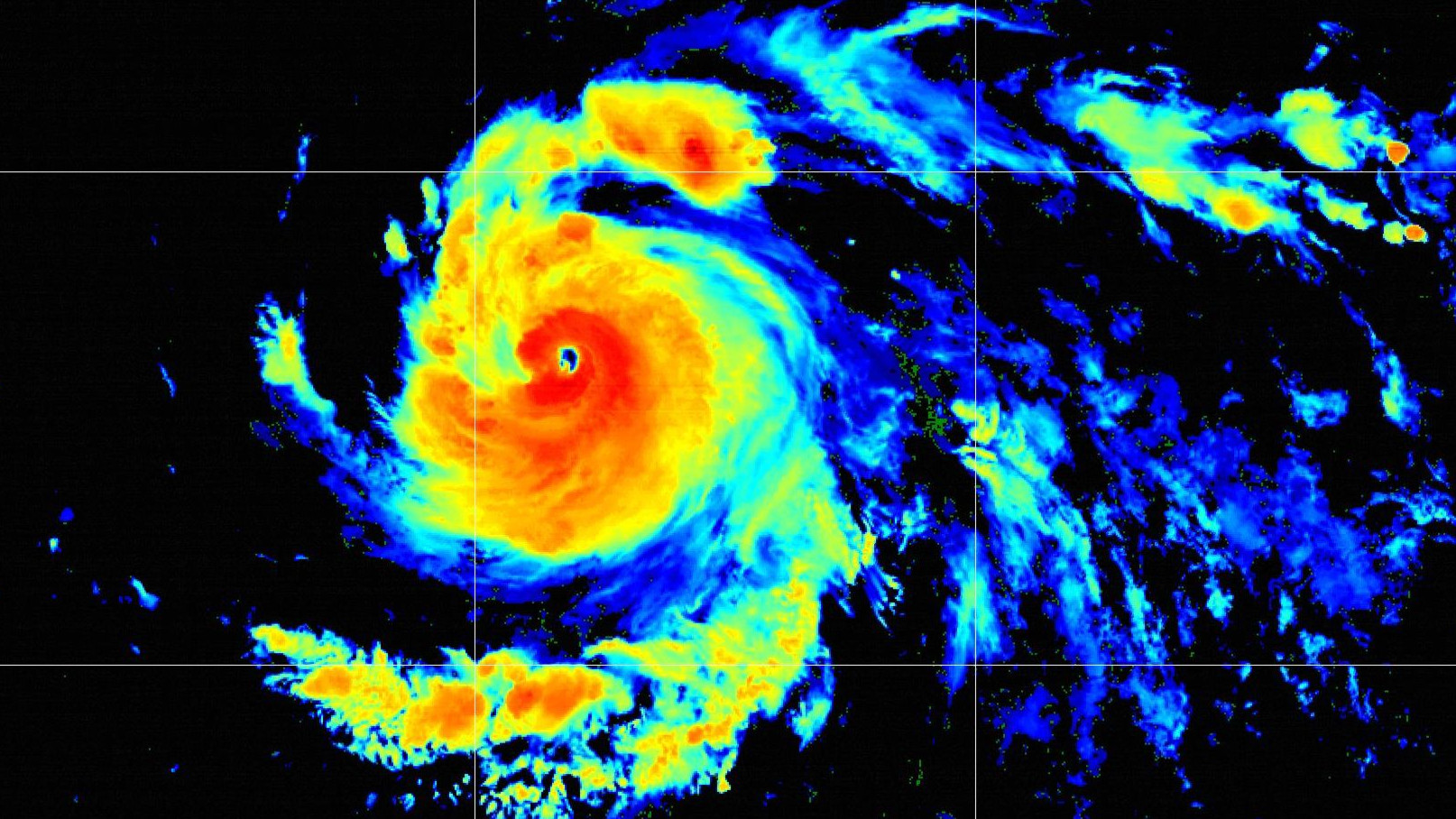 Hurricane Douglas as seen from the NOAA GOES Image Viewer

HAWAIʻI - Although its too early to tell which islands will be impacted by Douglas, forecasters say there is an increasing chance that heavy rain and strong wind could affect portions of the state beginning Sunday.

(BIVN) – Douglas has rapidly intensified since earlier today. With maximum sustained winds near 120 mph with higher gusts, the storm is now a category 3 hurricane on the Saffir-Simpson Hurricane Wind Scale.

Douglas could become even stronger on Thursday, and then gradual weakening is forecast to begin by early Friday. 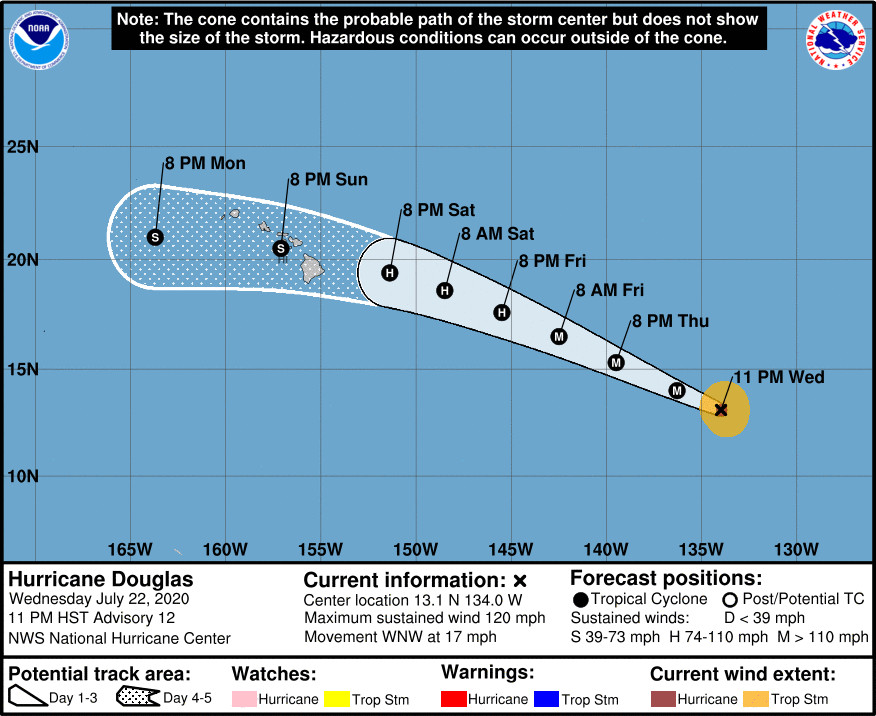 The National Hurricane Center in Miami says Douglas “is expected to move near or over portions of the Hawaiian Islands this weekend, and there is an increasing chance that strong winds and heavy rainfall could affect portions of the state beginning on Sunday. Interests on the Hawaiian Islands should continue to monitor the progress of Douglas and the official forecasts as they evolve over the next few days.” 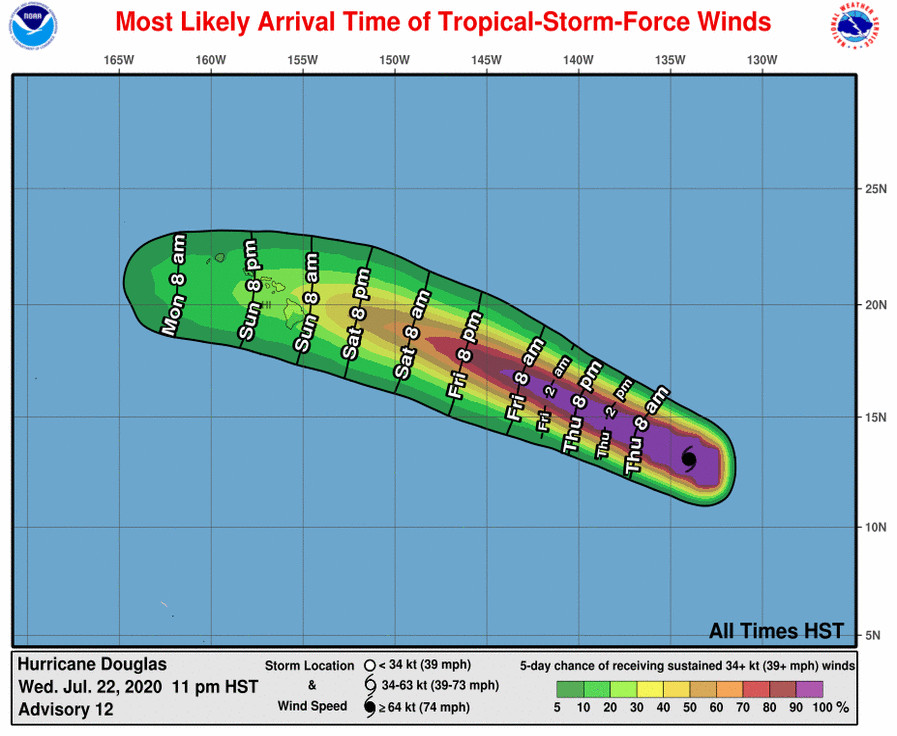 “A Hydrologic Outlook (ESFHFO) has been issued due to the potential for flash flooding this weekend,” the National Weather Service in Honolulu said. “With the potential for a tropical cyclone impacting the state this weekend, any preparations such as assembling disaster supplies should be made now. It is recommended to have 14 days of food, water, and medicine for you and your family.”

From the National Hurricane Center discussion at 11 p.m. HST:

Douglas has rapidly intensified since earlier today, with satellite images showing a ragged, but nearly clear eye surrounded by cold cloud tops of -70 C. There appears to be a little dry air intrusion across the northern portion of the circulation, which is limiting the amount of deep convection wrapping around that part of the eye. Both Dvorak intensity estimates from TAFB and SAB have increased to 5.5/100 kt, while the ADT and SATCON estimate averages have increased to 105 kt. Since the cyclone’s appearance has improved slightly since these estimates arrived, the advisory initial intensity has been set at 105 kt, making Douglas a major hurricane.

The environmental conditions supporting the rapid intensification appear at their best at this time as the cyclone is over SSTs of over 28 C, with low wind shear in a moist air mass. If the cyclone can fight off the dry air in the northern semicircle, some additional strengthening is possible, especially early Thursday. However, Douglas should be gradually moving into a less hospitable environment for strengthening over the next few days, and in 36 h the cyclone is forecast to cross the 26 C SST isotherm and into a region where the 500-700 mb relative humidity is less than 60 percent. Later on in the forecast period, wind shear is also expected to be on the increase. These factors should cause the cyclone to gradually weaken beginning Thursday night. Douglas is expected to be at or near hurricane intensity as it approaches the Hawaiian Islands on Sunday, and all interests there should monitor forecasts as they evolve over the next few days. The NHC forecast was adjusted higher in the first 12 h based on the initial intensity, and is very close to the previous forecast after that time. This intensity forecast closely follows the various consensus aids.

The initial motion is west-northwest or 295/15. Douglas should continue on a general west-northwestward motion for the next few days, steered by a large mid-level ridge extending across much of the central and eastern North Pacific. The cyclone is then forecast to turn more toward the west late in the forecast period as it moves near the Hawaiian Islands. The track guidance is tightly clustered and the new NHC is little changed from the previous one.