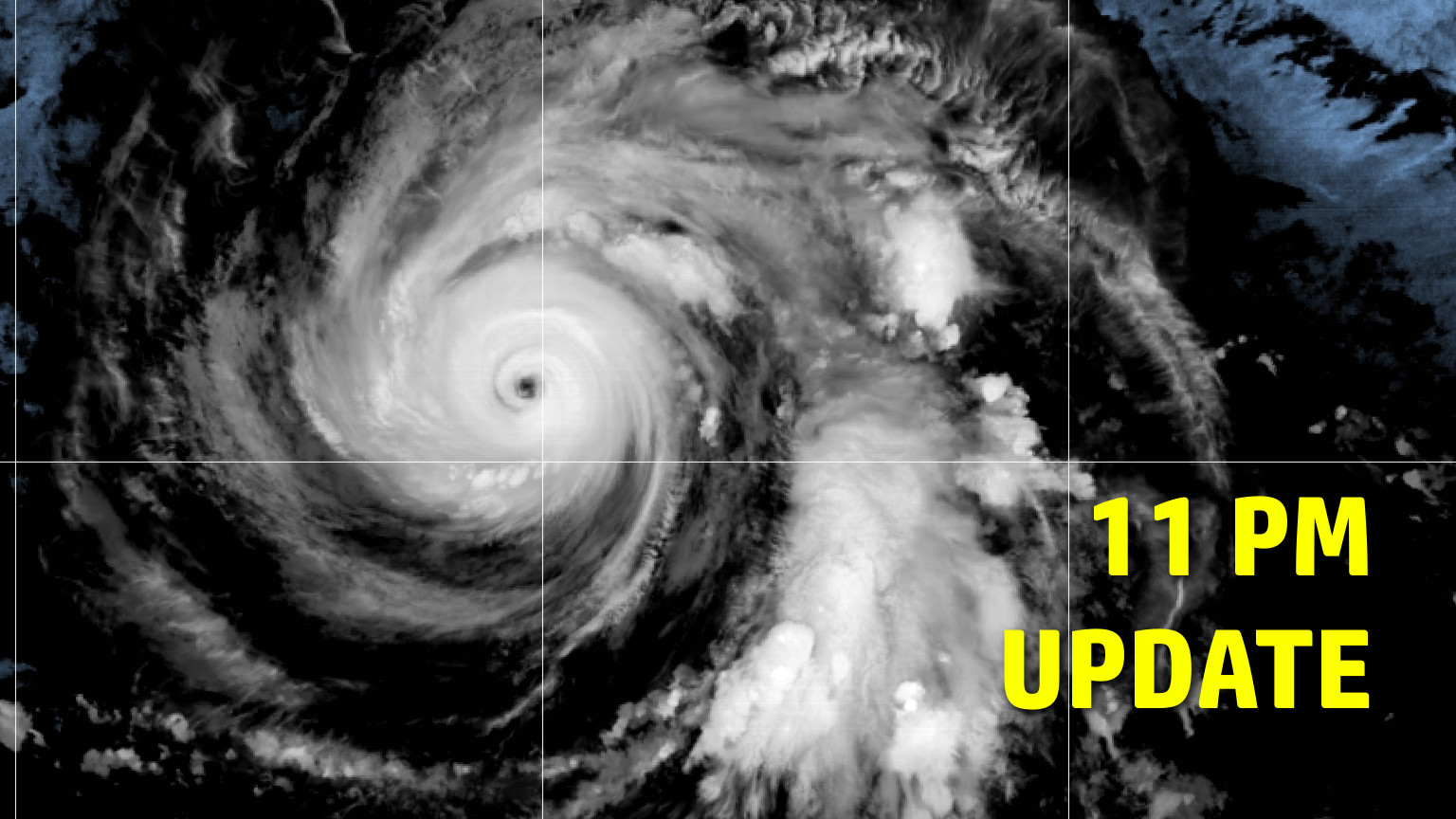 HAWAIʻI - Douglas is expected to move near or over portions of the Hawaiian Islands this weekend, bringing with it an increasing chance of strong winds, dangerous surf, and heavy rainfall. 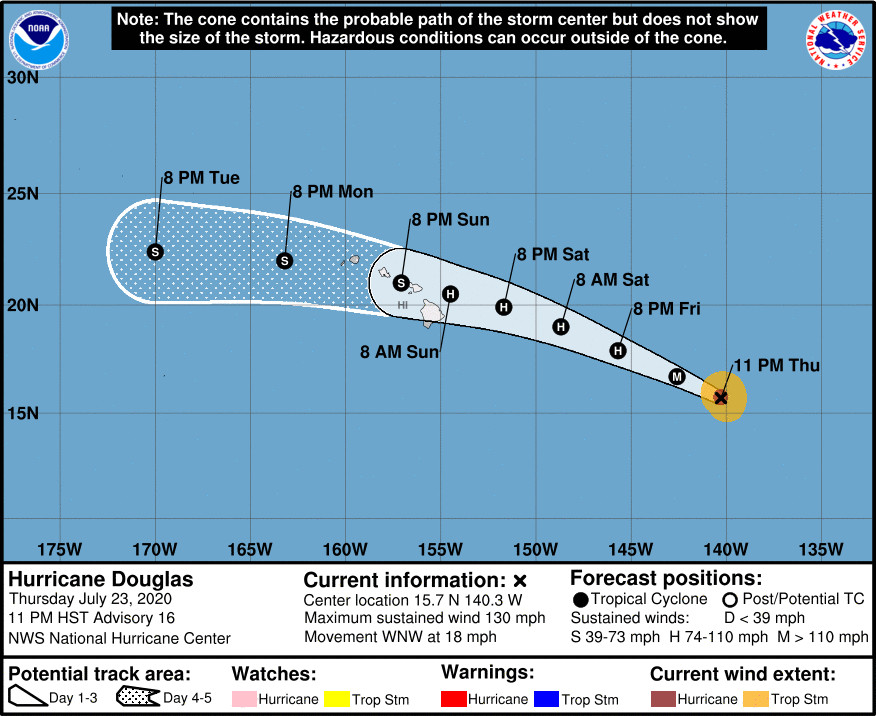 (BIVN) – As of 11 p.m. on Thursday evening, Hurricane Douglas was 1,010 miles east southeast of Hilo, moving west northwest towards Hawaiʻi at 18 mph.

Douglas is a category 4 major hurricane, with maximum sustained winds near 130 mph with higher gusts. The storm has likely reached peak intensity, forecasters say, and gradual weakening is expected to begin on Friday and continue through the weekend. Still, Douglas is forecast to be near hurricane strength when it approaches the Hawaiian Islands. 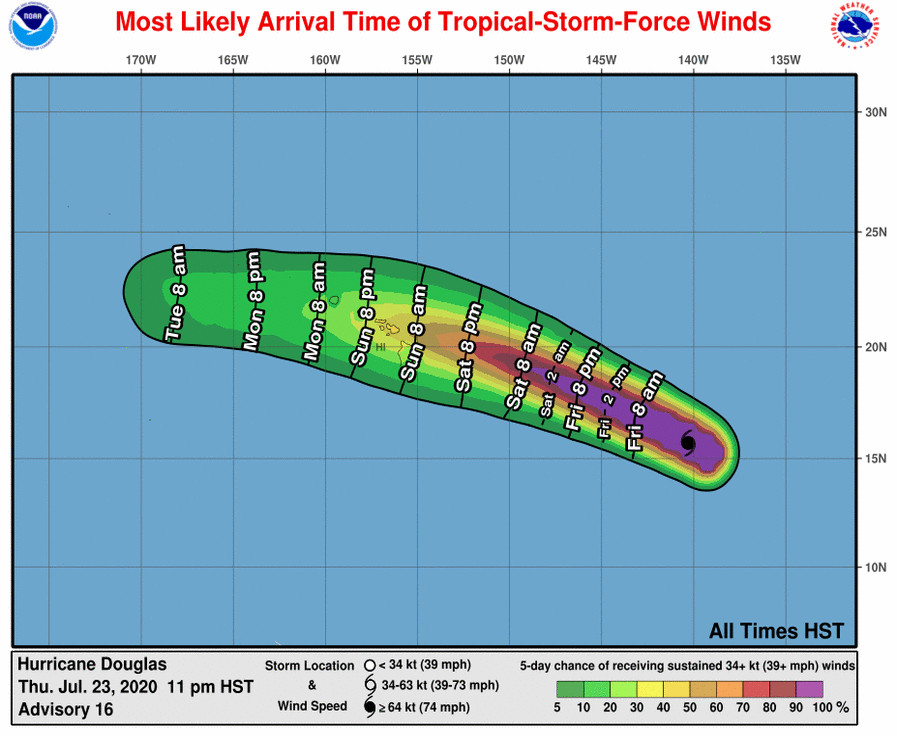 “Douglas is expected to move near or over portions of the Hawaiian Islands this weekend, and there is an increasing chance that strong winds, dangerous surf, and heavy rainfall could affect portions of the state beginning Saturday night or Sunday,” the National Hurricane Center said at 11 p.m., in its final message before handing the storm-tracking duties over to the Honolulu-based Central Pacific Hurricane Center. “Interests on the Hawaiian Islands should continue to monitor the progress of Douglas and the official forecasts as they evolve over the next few days. Watches could be issued on Friday,” the forecasters said.

Swells generated by Douglas are expected to begin affecting portions of the Hawaiian Islands on Saturday.

“Although the latest ensemble guidance remains in good agreement and shows Douglas passing near or through the islands late Saturday night through Monday from east to west under a strong mid-level ridge, any deviations in the eventual track through the area will significantly effect the level of impacts realized in Hawaii,” wrote the National Weather Service in Honolulu on Thursday evening.

The National Hurricane Center notes that there is “notable spread in the model guidance now compared to yesterday as Douglas approaches the Hawaiian Islands”, explaining:

The faster and southernmost guidance from the ECMWF takes the center of the cyclone over the big island, while the northernmost GFS and HWRF take the cyclone just north of the island chain. The other guidance, including the track consensus aids lie in between those solutions. The latest NHC forecast was nudged slightly northward between 48 h and 96 h, but still remains south of the consensus aids during those time periods. Otherwise, the NHC forecast was little changed from the previous one.