video from the 5 p.m. media briefing with the Central Pacific Hurricane Center, edited by BIVN

HAWAIʻI - Hurricane Douglas is still forecast to be close to hurricane strength when it passes near the islands. 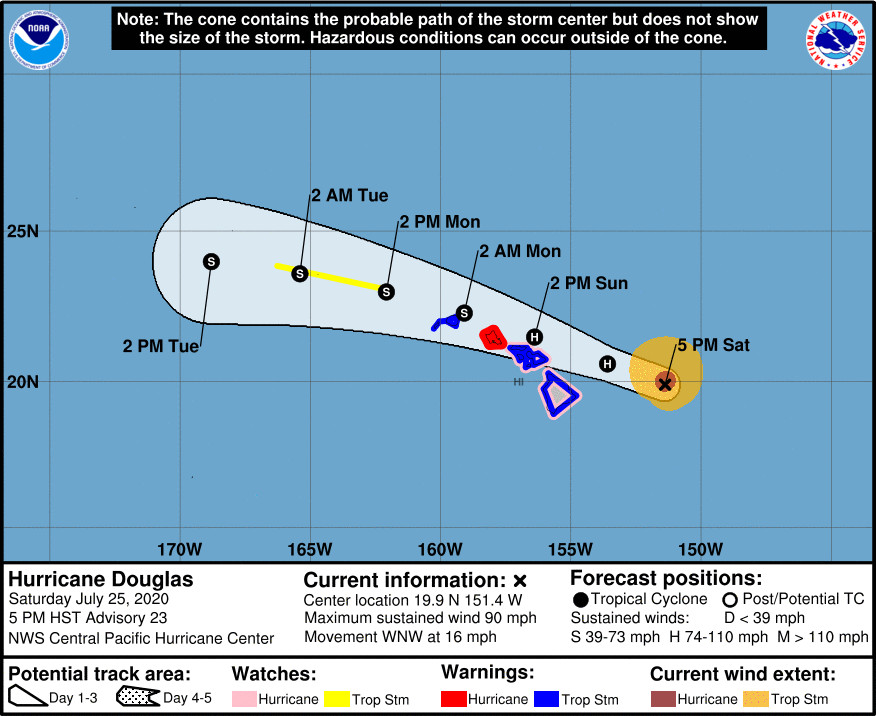 (BIVN) – Hurricane Douglas is 240 miles east of Hilo, and continues to move west northwest at 16 mph.

Douglas maximum sustained winds remain at 90 mph with higher gusts, the same as was measured at 11 a.m. HST. Gradual weakening is still expected over the next couple of days, the Central Pacific Hurricane Center says. Douglas is still forecast to be close to hurricane strength when it passes near the islands.

A Tropical Storm Warning and a Hurricane Watch remain in effect for Hawaiʻi island. A Flash Flood Watch and a High Surf Warning for east-facing shores are also in effect.

In the 5 p.m. update, a Tropical Storm Warning was also issued for Kauai County, including the islands of Kauai and Niihau.

Here are the hazards that are expected to affect land:

SURF: Large swells generated by Douglas are expected to build tonight and affect the Hawaiian Islands Sunday into Monday, and storm surge of 2 to 4 feet above normal tides is expected near the center of Douglas. The large swells and surge will produce life threatening and potentially destructive surf along exposed shores.

RAINFALL: Heavy rainfall associated with Douglas is expected to affect portions of the main Hawaiian Islands from late tonight into Monday. Total rain accumulations of 5 to 10 inches are possible from Maui County westward to Kauai County, with the greatest amounts in elevated terrain. This rain may result in life-threatening flash flooding and land slides, as well as rapid water level rises on small streams. Douglas could produce 2 to 5 inches of rainfall over the northern half of the Big Island.

From the Central Pacific Hurricane Center discussion at 5 p.m. HST:

In spite of marginal SSTs near 26C and increasing vertical wind shear, convection increased around the center of Douglas a few hours ago, and a ragged eye briefly reemerged in conventional satellite imagery. As a result, data sampled by the U.S. Air Force 53rd Weather Reconnaissance Squadron earlier in the day showed little change in the intensity of Douglas. A blend of adjusted flight levels winds and SFMR data supports holding the initial intensity at 80 kt with a central pressure of 982 mb. Reconnaissance aircraft will conduct another mission into Douglas tonight.

Aircraft and satellite data indicate that Douglas continues to move toward the west-northwest (290 deg) and that the forward motion has slowed to 14 kt. Douglas is being steered by a low- to mid-level ridge to the northeast and is approaching a weakness in the mid-level ridge that is causing the slight deceleration. A continued motion toward the west-northwest will bring Douglas over, or very near, portions of the main Hawaiian Islands Sunday and Sunday night, then to parts of the Papahanaumokuakea Marine National Monument on Monday and Tuesday. The updated forecast track is very close to the previous forecast and during the next couple of days, remains near the ECMWF toward the southern end of a tightly clustered guidance envelope. Model spread increases on days four and five, when the official forecast trends toward the middle of the guidance envelope.

Gradual weakening is expected through the forecast. SSTs will gradually warm along the forecast track. However, vertical wind shear will steadily increase over the next couple of days and is expected to be strong enough to induce weakening. The official intensity forecast has changed very little from the previous advisory, and continues to follow a blend of the corrected consensus and statistical model guidance.

1. Douglas continues to approach the main Hawaiian Islands, and will pass dangerously close to, or over, the islands late tonight through Sunday night. The close passage of Douglas brings a triple threat of hazards, including but not limited to damaging winds, flooding rainfall, and dangerously high surf, especially along east facing shores.