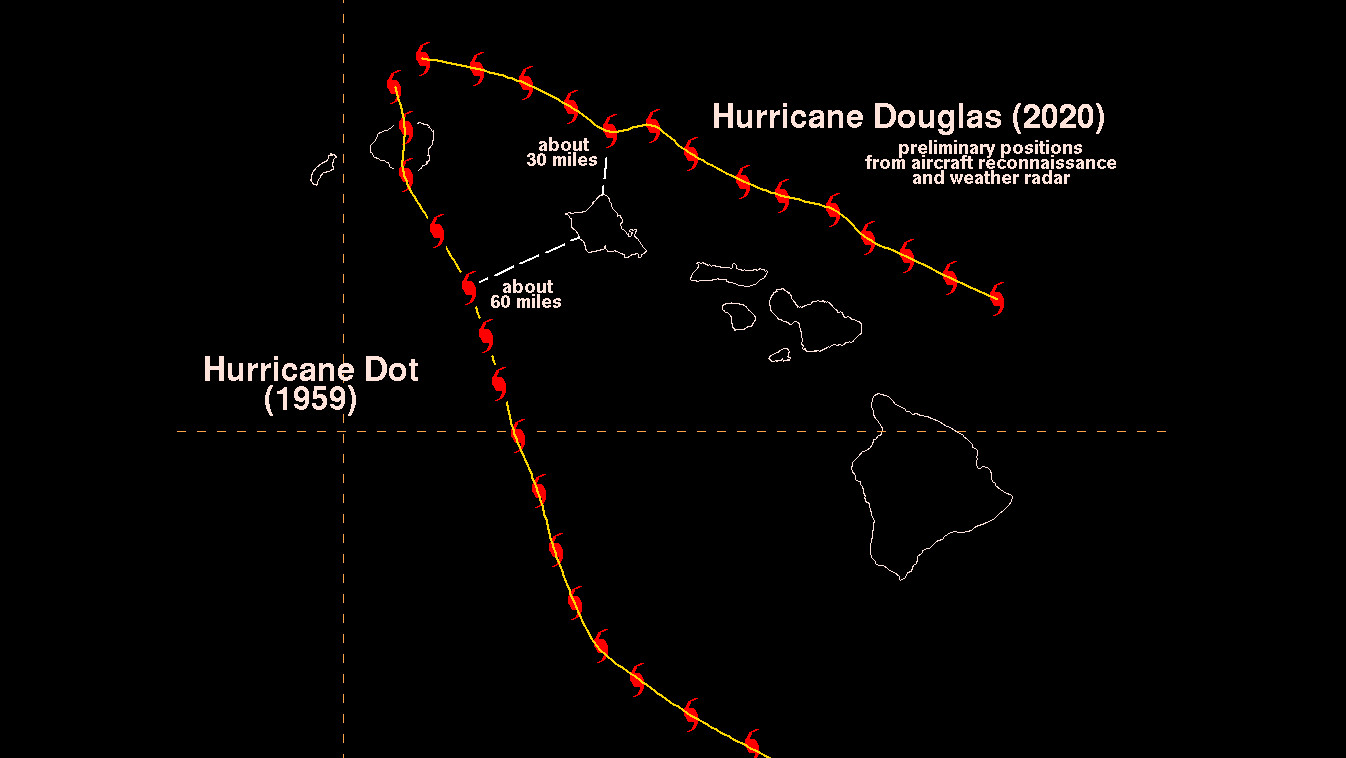 (BIVN) – Hurricane Douglas made a close pass by the Hawaiian islands this weekend, but the damaging winds and torrential rain remained mostly over the ocean.

According to the National Weather Service in Honolulu, Douglas passed about 30 miles north of Kahuku on Oʻahu around 7 p.m. on Sunday. “This appears to be closer than Hurricane Dot, which passed approximately 60 miles southwest of the Waianae Coast on Oahu before making landfall on Kauai in August of 1959,” the forecasters wrote.

Although it churned closer to its neighbor islands, it was on Hawaiʻi island where the highest wind was recorded. Nene Cabin reported a 70 mph gust, slightly edging out Kula, Maui which recorded 69 mph wind.

The saddle area in the middle of Hawaiʻi recorded the second, third and fourth highest winds on the Big Island. 15 S Pohakuloa Camp (40 mph), PTA East (37 mph), and Bradshaw Army Airfield (36 mph) are all located between Maunakea and Mauna Loa.

Puʻu Kukui in Maui County saw the highest rain total in the State with 5.16 inches. Second highest was Kapahi in Kaui County with 3.69 inches.

On Hawaiʻi island, the Hāmākua coast recorded the most rain. Two spots in Paʻauilo recorded over 2 inches, and a location in Honokaʻa had 1.84 inches.

Both the wind and rainfall totals are preliminary information, reported across Hawaiʻi over the last 24 hours ending at 8 a.m. Monday, July 27. “Observations are collected from a variety of sources with varying equipment and exposures,” the National Weather Service wrote. “We thank all volunteer weather observers for their dedication. Not all data listed are considered official.”

“Douglas was encountering some wind shear as it approached the islands,” the Honolulu forecasters stated. “Also, the islands were on the left side of the track of Douglas with respect to its west-northwest motion. The combination of these two fortuitous outcomes kept the worst of the weather associated with Douglas just offshore of all the islands. Satellite, radar, and aircraft reconnaissance data indicate that tropical storm force winds were within about 10 miles of the northern tip of Oahu during the closest approach of Douglas.”

“While the islands were fortunate this time, it is still relatively early in Hurricane Season 2020,” the National Weather Service reminded. “We encourage everyone to remain prepared, and always have a disaster preparedness kit ready for the next hurricane threat.”