HONOLULU, Hawaiʻi - Friday was the third day of "surge" testing on Oʻahu, and the island is gearing up for more next week using the H-3 Freeway. 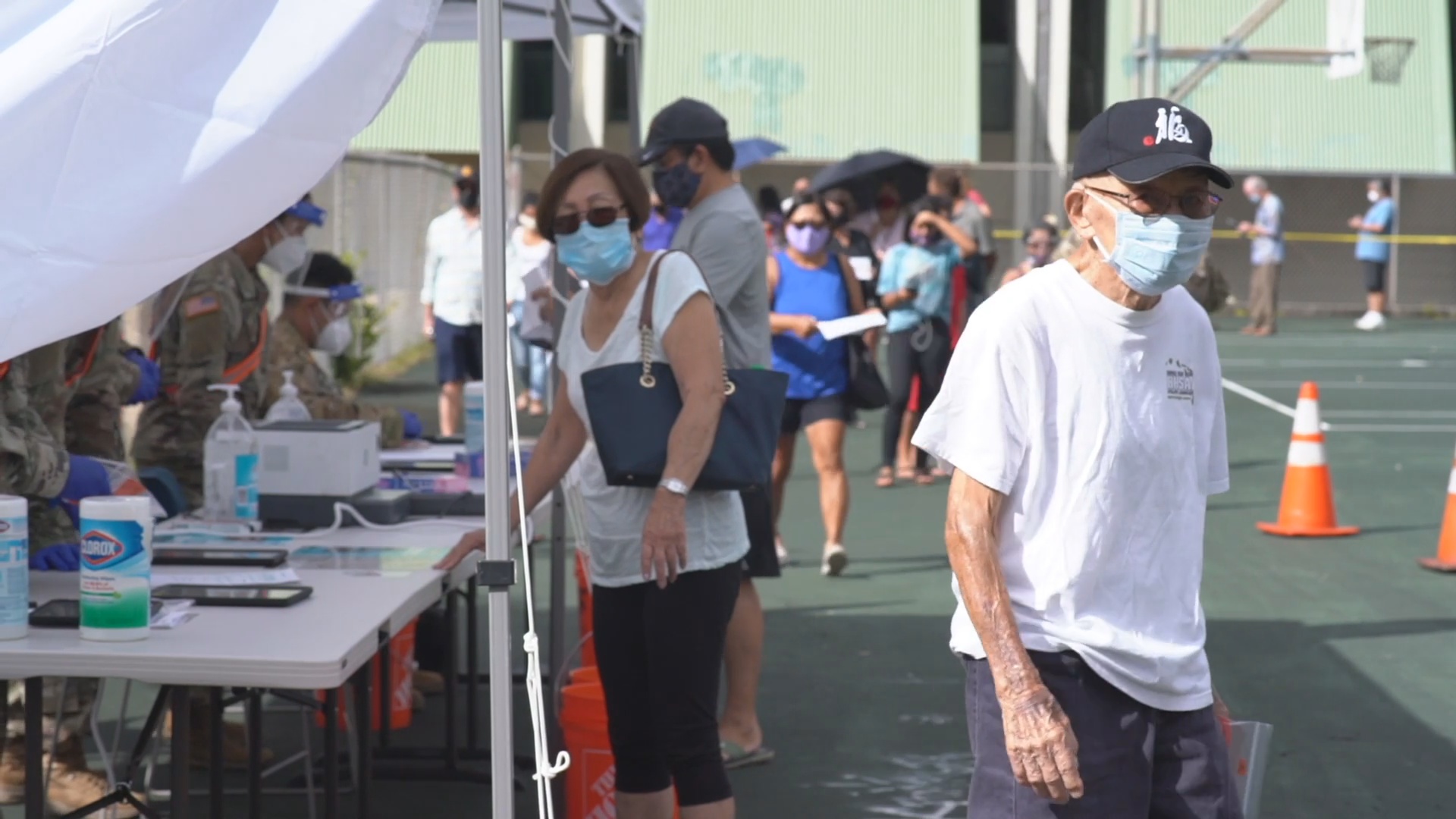 (BIVN) – The third day of “surge testing” took place on O‘ahu on Friday, as the City and County of Honolulu continues its collaboration with the federal government to conduct 5,000 COVID-19 tests per day over a two-week span.

The test is free, no insurance needed, and is self-administered and does not require a physician referral. Due to the number of participants, advanced registration is recommended at this website.

Oʻahu has seen a dramatic rise in new cases of COVID-19 in the month of August, and the numbers are likely to get worse. “I just want to remind everyone that because we are testing so many more people,” said Governor David Ige said on Friday, “we will see increases in the number of cases. I don’t want people to be surprised. We do expect this to happen.”

“There are so many people that the sites were inundated,” Governor Ige said. “Traffic was a big challenge and too many people were stuck waiting in line for hours at a time.”

The Hawaiʻi Department of Transportation is thus coordinating for the use of the H-3 Freeway as massive COVID testing site. DOT stated in a Friday media release:

The City and County of Honolulu and State of Hawaii will be partnering to provide a surge testing location to the Oahu community that will minimize impacts to the public and improve safety. The Hawaii Department of Transportation (HDOT), Honolulu Fire Department, Honolulu Police Department, City and County Department of Transportation Services, and the Hawaii Emergency Management Agency (HIEMA) are coordinating a full closure of the H-3 Freeway between the Halawa Interchange and the Halekou Interchange to facilitate COVID testing on Tuesday, Sept. 1 and Thursday, Sept. 3, 2020. The closure must be coordinated with the federal government and notice will be provided once this is confirmed.

The closure of H-3 in both the Halawa bound and Kaneohe bound directions would begin at 7:30 a.m. and continue to 6 p.m. on both days to allow time to set up the closure. During testing hours the inside lanes of the H-3 at the Harano Tunnels will be used to queue vehicles of those seeking to be tested for the COVID-19 virus. The outer lane would serve as access for emergency vehicles. To maximize testing efficiency, test stations will be set up on both the Kaneohe and Halawa sides of the tunnel to service both the north and south bound directions. After testing, drivers will be asked to continue on H-3 to the end of the closure, and can use alternate Koolau routes if necessary.

“This surge testing will help us flatten the curve once more,” said Gov. David Ige. “We’re all working together for the health and safety of our whole community. Use of the H-3 will provide space to allow as many people as possible to be tested.”

“One of the most important parts of this surge testing effort is making sure everyone who wants a test has access to a testing site,” said Mayor Caldwell. “Testing on the H-3 is a historic, first ever endeavor that will make a significant difference in getting more people tested. This will be made possible by all of our Federal, State, and County teams working together to make sure traffic in and out of these sites can flow smoothly. It’s not a small task to coordinate these sites, and I want to thank our partners at HDOT for clearing a path for as many of our residents as possible to get tested for COVID-19.”

HDOT has reached out to emergency services, TheBus, and Marine Corps Base Hawaii (MCBH) to notify them of the planned closure. The queuing will be monitored by City and State personnel at the Joint Traffic Management Center (JTMC), and information will be provided to the public on closure times and anticipated wait times.

HDOT encourages motorists to take alternate Koolau routes such as Likelike Highway or Pali Highway. Estimated travel times and camera views for all Koolau routes can be found on GoAkamai.org.