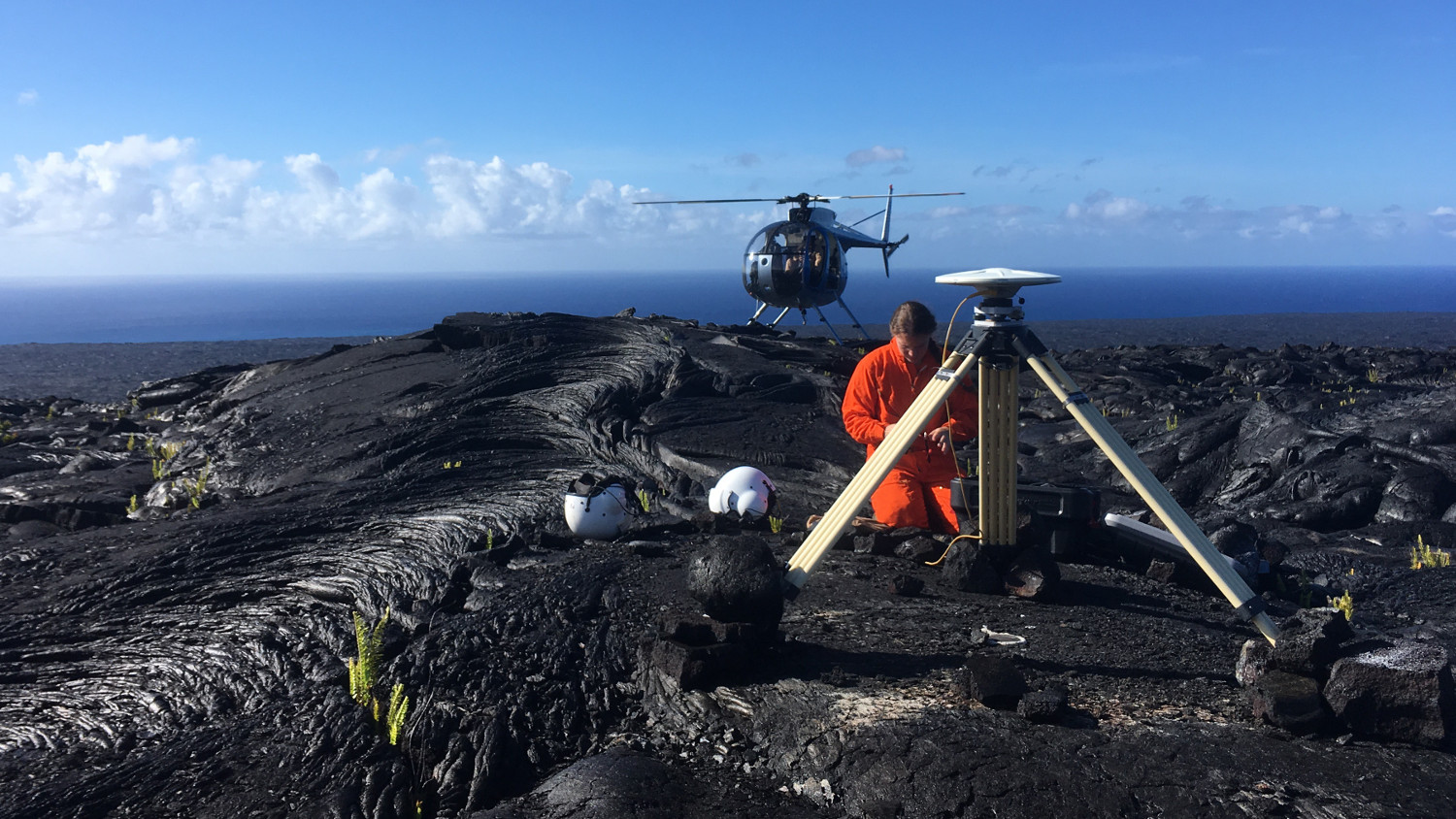 HAWAIʻI ISLAND - USGS explains how geodesy is the science of measuring the Earth’s geometric shape, gravity field, and orientation in space - and how these change through time.

Geodesy is the science of accurately measuring and understanding the Earth’s geometric shape, gravity field, and orientation in space—and how these change through time. Many geodesists today map shorelines, determine land boundaries, and improve transportation and navigation.

In the past century, geodesists have used different tools and survey methods to help measure the Earth’s shape. While these scientists can wear many different hats, geodesists at the USGS Hawaiian Volcano Observatory (HVO) are interested in studying how the surface of a volcano deforms to determine what is happening underground.

Triangulation is one of the most time-honored and earliest methods, gaining traction by the 19th century. Triangulation is the process of determining the location of a point by measuring the angles (of a triangle) between control points a known distance apart. This allows measurement of long distances, being controlled only by sight of the beacon. Each calculated distance could then be used to form another triangle forming a complex chain. The earliest triangulation at Kīlauea took place in 1896.

While similar to the geometry you learned in school, the formulae used in triangulation include curvature of the earth due to the lines being kilometers (miles) long. Triangulation was used sporadically for volcano monitoring on Kīlauea, though it was replaced in the mid-20th century by more accurate electronic distance measuring.

Trilateration is a similar surveying technique but instead of measuring the angles, the lengths of the triangle’s sides are measured. Any deformation in the region of the established network could then be measured by repeating the survey at a later date.

Leveling, a technique used to measure height differences, has been conducted at Kīlauea since 1921 and was an integral part of HVO’s monitoring from the early 1960s until a decade ago. During leveling, the differences in height along a series of benchmarks are measured and then compared with previous measurements to determine the amount of uplift or subsidence.

Leveling remains one of the most precise ways to measure vertical height over long distances. Unfortunately, leveling is rarely done at Kīlauea today due to the amount of staff required and expansion of modern satellite-based techniques, such as Global Positioning System (GPS) and Interferometric Synthetic Aperture Radar (InSAR).

In the mid-1960s, an Electronic Distance Meter (EDM) was introduced to Kīlauea. With an EDM, distances could be quickly and precisely measured electronically. Most EDMs use a laser to measure the transit time of light through the atmosphere to reflective targets, which are placed around the volcano.

Using the travel time, speed of light, and air temperature and pressure, distance can be calculated with precision of 1 mm (0.04 inch) over a distance of 1 km (0.6 miles). If the distance changes between surveys, deformation is happening! Most EDMs used today are short range and are one component of an integrated instrument known as a “total station.” Since the late 1990s at HVO, EDMs have given way to satellite techniques.

Microgravity surveys have been conducted on the Island of Hawai‘i since the early 1970s. The force of gravity depends on the mass beneath your feet and your distance from that mass, so gravity is not a constant as magma moves and the ground surface changes shape. For volcano geodesists, microgravity surveys are conducted to measure how much magma may be moving beneath the ground. Gravimeters are extremely precise (and expensive) instruments that use either a very sensitive spring-and-boom or quartz sensor.

Tiltmeters have been used to monitor volcanoes for decades. Just like a carpenter’s level, an electronic tiltmeter uses a small container filled with a conducting fluid that has a bubble to measure a change in slope. There are a variety of tiltmeters used but the majority of tiltmeters on the Island of Hawai‘i are installed in boreholes at least a few meters (5–20 feet) deep to control surface noise.

The most common geodetic tools used by HVO today are high-precision Global Navigation Satellite System (GNSS), which includes GPS and InSAR; these have been described in two recent “Volcano Watch” articles (see here and here).

Geodesists from around the world come to the Island of Hawai‘i to study Earth’s ever-changing shape, with Kīlauea and other Hawaiian volcanoes making it a great “natural laboratory!”